The investors behind Indura Beach and Golf Resort in Honduras took the “go big or go home” approach and have already proved a major point. That is, if you go into a region where’s there’s not much competition and spend what it takes to outdo everyone else, you’ll be sitting on the top of the heap. It worked in the days of Conrad Hilton and it’s working today in Central America.

The obvious comparison for Indura is actually the last splashy resort to open using this principle: Mukul in Nicaragua. Along with the long-established Four Seasons Papagayo in Costa Rica, there’s now a clear trio of superlative luxury resorts in an area that hasn’t had a whole lot of them up to now. Indura Resort faces more challenges than the others just because it’s in beleaguered Honduras, but it’s located in Tela, about an hour and a half from San Pedro Sula. A driver holder a sign with your name on it meets you at the airport and whisks you off to to the coast, so whatever problems are going on in the big city are immaterial. 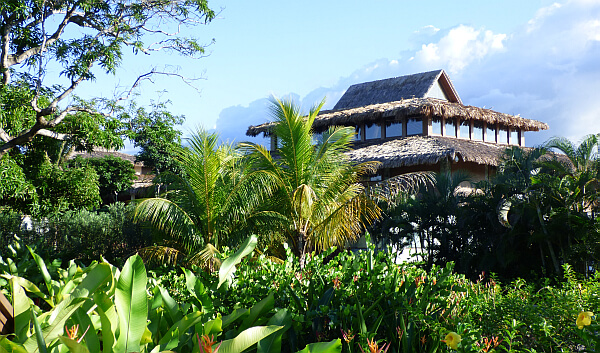 This grand resort is on a prime stretch of real estate in Tela Bay, with a long beach in front of it and an 18-hole PGA golf course (the only one in the country) snaking around it and running along the water for some holes. The course is a beauty, with the mountains rising up inland and waves crashing near some of the greens. There’s wildlife along the way and the caddy will tell you not to go poking around for your lost ball in some spots: there are crocodiles in the water.

The rooms are all huge junior suites, arranged in groups of four in buildings dotted around the property. Some of these have a direct ocean view, while others are looking out at the greenery and manicured gardens. Take a tour in the video below:

These 60 suites are some of the most comfortable and spacious you’ll find in the region and are easily the nicest digs in Honduras outside of a few premium suites in Roatan. Impeccably designed and loaded with amenities, they have a sitting area in an alcove, a big closet area with a large soaking tub, and an oversized bathroom with large shower and ESPA toiletries. The furnished wrap-around deck adds more space outdoors. The rich hardwood floors and cabinets, accompanied by custom furniture and lamps, combine with attractive lighting to present an enveloping space that’s hard to leave.

Meal times present a good reason to leave, however, with cuisine that consistently rises above the usual low standards in Central America. The investors here did not put all their money in the facilities: they also hired top managers and chefs who honed their careers at some of the best beach resorts in Mexico. So at the signature Bazul restaurant, at the beachfront grill, or at the golf course, you can expect tasty food with a flair in the presentation. You can go local with Honduras or Garifuna specialties, dig into the fresh seafood coming off the boats, or go for international favorites and good desserts.

A bar serves the beach and pool during the day, another is hopping in the lobby at night. This lobby area is open-air and inviting, with chairs hanging from a swing and contemporary sofas placed in various areas on terraces.

An extensive spa is in a separate building, a fountain and stream running through the middle and fountains outside the treatments rooms to lend a calm atmosphere. The treatment menu is thoughtful and reasonably priced, with well-trained staffers who are very good at getting the kinks out. The treatment rooms are in separate cabins, for singles or couples.

Indura Resort’s isolation on a huge expanse of land is probably a big plus for guests concerned about security, but that’s the main drawback for those who don’t like to be stuck at a resort. Thankfully there are a variety of excursions to book through the staff. I took a trip to the Jeannette Kawas National Park wildlife refuge on the Punta Sal Peninsula and the Lancetilla Botanical Garden is nearby. For some local color just book a ride to the beach town of Tela or a Garifuna village. If you need to work off the good meals, there’s a well–equipped gym on site.

I expected to have to revert to Spanish a lot in this country without a lot of foreign tourists on the mainland (except in Copan), but English proficiency is surprisingly good for most staffers interfacing with guests. There are a few inherent challenges the owners of the Indura Golf and Beach Resort face in terms of the developing country where they are located, but that’s reflected in the rates, which are less than half of what they would be in Costa Rica or even Panama at $25o to $550 per night.

Review and photos by editor Tim Leffel, who was hosted at the resort while researching a feature story for another publication. Video courtesy of Luxury Latin America – Honduras.