The word “Nicaragua” is usually not the first one that comes to mind when people think of postcard-perfect beaches with white sand, warm water, and a laid-back Caribbean vibe. Arenas Beach Hotel on Big Corn Island of Nicaragua is the Caribbean without the usual price tag that implies.

Nicaragua is rightfully known for its long, often mostly deserted Pacific Ocean beaches that are prized by surfers and frequented by sea turtles laying eggs. The country is wedged between two oceans though and after a short prop plane ride from the capital, you can be on an island in the Caribbean instead. There are two islands out here actually: Big Corn and Little Corn. The latter is getting all the press lately because of a new high-end yoga retreat we’ll review later, but Big Corn has the airport and more places to stay.

Arenas Beach Hotel is one of the larger ones on the island, a full-service resort with a restaurant, that cool beach bar pictured at the top, and complimentary Wi-Fi that works pretty well considering the isolation. It has 31 rooms, with 11 rather typical rooms with renovated baths in the main building, then 11 bungalow rooms that are more basic but have a nice hammock to swing in outside. 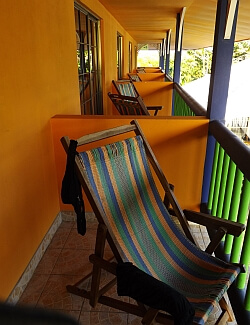 The regular rooms come with refrigerators, A-C, internet access, nice baths with a hair dryer, and furnished balconies. They don’t have a safe though, so bring something to lock up your valuables if you’re worried. Some have a limited view of the water; all look out at where the sun is setting. The bungalows get basically the same amenities, but have one bed instead of two and a little more style. All have cable TV with just a few English channels: I watched the Super Bowl here in Spanish.

The main reason to stay here is glorious Arenas Beach—one of the longest stretches of sand on this small island—and the great set-up with lounge chairs and cabanas with sofas. One day we were there the beach bar was closed because someone called in sick, but waiters will deliver a rum punch right to you.

The restaurant here is overpriced by Nicaraguan standards, with most main dishes being between $10 and $20, but there’s another good waterfront restaurant down the beach that’s less (a $15 lobster plate is the big splurge) and you get get a taxi to anywhere else on Big Corn for US$1 per person. There are simpler places within walking distance in town where you can eat for a few bucks and $10 will get you a bottle of good Flor de Caña rum.

There’s not all that much to do on Big Corn besides excursions to go fishing or snorkeling, but for a relaxing beach break where you just want to de-stress for a while, you can get much more laid-back than this place. And although they’re part of a Spanish-speaking country, most of the islanders speak English.

You can find a place to flop on the Corn Islands for $10 if you just show up and look around, but going for a full-service hotel like this one is not going to hit your wallet too hard either. Arenas Beach Hotel’s rates run from $100 to $150 double.

You have to book direct with Arenas Beach Hotel since like most places to stay on these islands, they can’t seem to get organized enough to work out a listing with any of the booking services. Tomorrow mon!

Review and photos by Tim Leffel, who was hosted by Nicaragua Tourism while researching a travel article for another publication.