If it’s your first time to South Beach, a few things may surprise you: it’s not actually in Miami, but Miami Beach (an essential distinction for locals); it can heat up to 90 degrees by 8:00 am even in November; and the old rule of “no shirts, no shoes, no service,” rarely applies. Indeed, South Beach is home to one of the few major public beaches that allows topless sunbathing without apocalyptic damnation by religious or cultural conservatives.

For a summer playground of this scale, a prodigious amount of accommodation and entertainment supports and satisfies, particularly at the glitzy five-star end, making full bank accounts and generous credit limits as essential as sunscreen and shades. Happily, the four-star Hyatt Centric South Beach, which opened June 2015, offers an ideal solution for those who want at least some of the dazzle, but not the financial fretting. 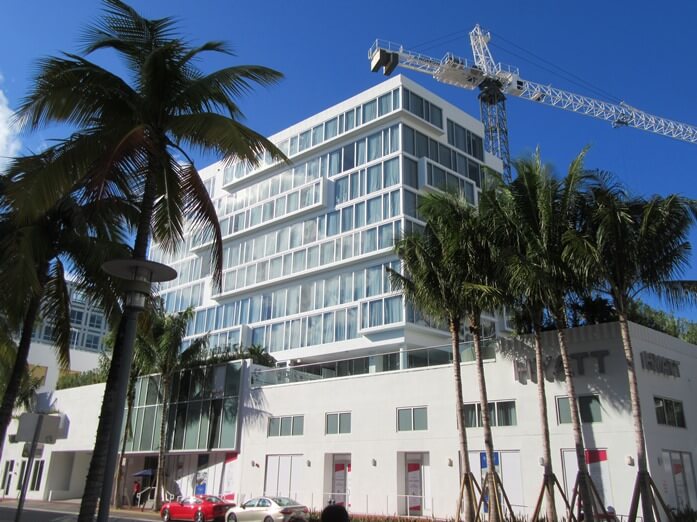 As the name suggests, the 10-story glass tower by Kobi Karp is indeed “centric,” at least to the beach, which is just one block east, or about a five-minute walk. Entertainment-wise, the hotel is also in prime position, just one block from the Gehry-built New World Symphony and Lincoln Road Mall. Miami Beach’s oldest and most Bukowski-esque bar, Mac’s Club Deuce, is also an easy stagger away. In short, park the car and ride the sandals.

But if intense tropical heat is uncommon to you (as for pasty hotel reviewers from Vermont), it’s probably best to avoid doing much outside between the hours of 10 and 4. In fact, the swelter outside made for an equally intense feeling of relief when I stepped through the doors of Hyatt Centric last November into the all-embracing air conditioning. This was buoyed further when the elevator door opened on the third floor into the main lounge and reception. Indeed, the long rectangular space awash in grays, blues, and whites calms and comforts as well. 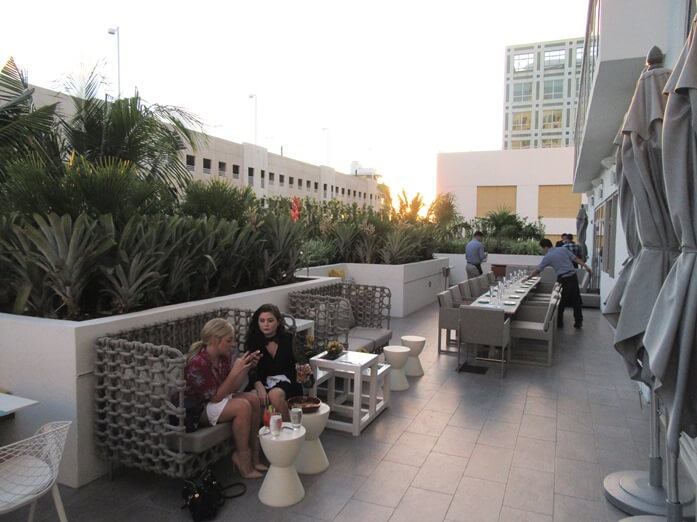 The terrace at DECK Sixteen

The life at Hyatt Centric South Beach primarily lives in kitchen of DECK Sixteen, helmed by Chef William Milian. Spanish-influenced Mediterranean dishes take up the majority of the menu, including hanger steak in a mustard chorizo herb sauce, octopus with giant beans and fried yucca, and roasted leg of lamb with piquillo pepper—all prepared in the Hyatt’s espoused “global philosophy” of food thoughtfully sourced, carefully served. The cocktails almost go one better, with a thoroughly delicious pineapple-lemongrass caipirinha that tastes even better on the outside terrace.

Before filling up on all of them, however, it’s probably best to dip into the 647 square foot outdoor pool, just below the DECK Sixteen. The chaise lounge chairs and cabanas provide plenty sunbathing opportunities, made all the more comfortable by service from the restaurant.

The rooms, all 105 of them, are as good as it gets at the four-star level. Although, the layout of room 1013—an ocean view king (starting at $490 per night)—is typical, with an entry corridor, bathroom to one side, and living space beyond. The impressive, quality is accentuated all the more by sunlight beaming through a wall of windows on the far side. The same goes for the design—mostly tans, creams, and grays punctuated with bright color bursts in artwork and upholstery; while thin furnishings effect a sense of space. The Hyatt Grand Bed, which uses “the latest advancement in coil design,” induces deep sleep easily, day or night. Only some rooms have ocean views, so be sure to ask if important. I just wish the windows opened, even slightly, to let in the salty ocean air, at least at night. It’s worth noting the bathrooms as well, for the spacious rain showers and organic BeeKind bath product.

There’s not much the Hyatt Centric South Beach could do better, as the hotel impressively covers all the bases to be expected at a four-star property, and then some. No, you won’t see Enrique Iglesias or Eva Mendes lounging by the pool, but you’ll meet fabulous folk nonetheless, starting with the staff, which is largely responsible for the hotel’s success. And a success it is, easily worth a night or two to any visitors to South Beach who don’t require Baccarat crystal cocktail glasses sprinkled with gold dust. Book directly online with Hyatt Centric South Beach or compare rates and reserve through Hotelopia.

All photos by Mike Dunphy