First things first: The Aethos Milan is cool. Super cool. Almost intimidatingly cool. In fact, as soon as my husband and I walked into the sprawling lobby lounge, I whispered to him, “I’m not sure we’re cool enough for this place.”

Set in the heart of Milan, the 32-room Aethos Milan (formally the Yard Milano) doesn’t look like any hotel I’ve ever seen. What it does look like a cross between a hunting lodge and a carnival; it’s at once masculine and classic but also whimsical and a little weird. The large lobby lounge sprawls across two rooms including a solarium-style room filled with low couches, plants, and natural light, and a darker bar area that’s filled wall-to-wall with vintage items ranging from sports memorabilia and suitcases to globes and leather saddles. There’s something to look at—or rather hundreds of things to look at—in just about every square foot of space. 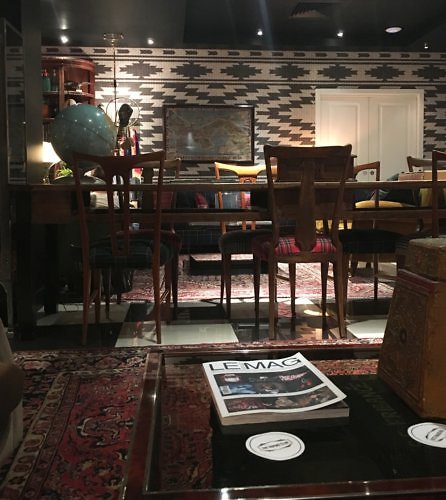 We’d arrived early so we were shown to a couch and offered a glass of champagne while the front desk staff checked to see if our room was ready. While we waited, we marveled at the beautiful Turkish rugs, plush leather couches, and antiques like a croquet set, old cash register, and vintage board games. Dark and clubby, the room gave off a distinct Mad Men vibe; unfortunately, several signs placed around the room warning that photos were forbidden intruded just a bit on that fantasy.

Up on the guest floors, the darkness continued, both in the color palate and the lighting. Our room, kitted out with dark green walls and accented with dark green and blue tweed pillows, had a nautical theme. Photos of fish and drawings of lobsters decorated the walls, a fisherman’s hat casually rested on a shelf, and a piece of coral served as the based of a lamp. And while there were several lamps, the room’s dark color palette and lack of natural light made it feel quite dark, even on a bright summer day. While I imagine that might have felt cozy and sexy in the winter, during the height of summer it was a bit discombobulating, though it did make it that much easier to take a mid-afternoon nap. 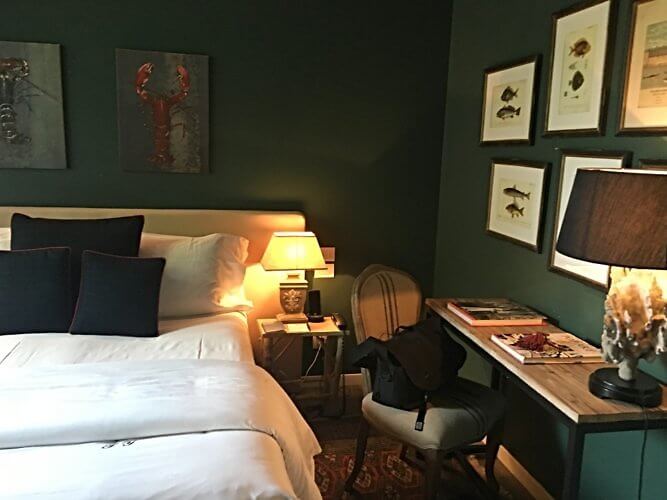 In addition to a queen bed, the room contained a small desk and chair, and a built-in shelf with a flat-screen TV, coffee maker, and mini-fridge.

The room itself was cozy but not cramped. The bed was quite comfortable, and there was a generously sized vestibule between the bedroom and bathroom where we could store our luggage and hang our clothes in a small closet. The bathroom was also quite large—though again it suffered from a lack of light. .

One area the hotel does not lack, however, is in its location. It’s set right across a canal from the uber-hip and historic Navigli area, which is known for its two canals lined with shops, bars, restaurants, and cafes that are buzzing all day and night long. It’s also a five-minute walk from the Genova train station which means it’s easy to get just about anywhere in the city.

Onsite (in the lobby lounge area), there’s a bar called the Doping Club, where we enjoyed two expertly prepared craft cocktails. There’s also a rumored speakeasy hidden behind the lounge, though we didn’t get a peak.

What I loved most about the hotel was its location, super close to the action but enough of a short walk away that it felt slightly removed (and the sounds of people partying along the canals didn’t reach us). I also appreciated the size and decor of the room, and the eclectic style of the lobby. The Yard Milano definitely fits into the fashion capital of the world—in some ways, it feels like a secret club that only the cool kids know about—but with its lack of practical lighting and no-photos policy, at times it almost made me feel as though I wasn’t cool enough to be a member.

If you go: Room rates start at around 230 euros per night. Every room is different, so it’s worth asking for a room with more natural light. Pets are welcome for a fee. Wifi is free. Book your stay directly on the hotel website or through a hotel booking site such as Travelocity or Expedia.