The Little America Hotel – Flagstaff, 2515 East Butler Avenue, Flagstaff, Arizona, has emerged from a 2-1/2 year refurbishment with a whole new look that reflects its place in the world.

While the outside retains the shape of a resort built in the early 1970s, the interior has been completely changed. Everything was custom-designed and unique to the property, from the chandeliers with their shades crafted of selenite (a translucent crystalline form of gypsum) to the polished raw edge big-leaf maple desks to the Native American motifs used in the carpeting.

Thin slices of chrysocolla — a blue-green copper phyllosilicate mined in Morenci, Arizona — are hung over the lobby fireplace and in the restaurant corridor. Other translucent slabs of minerals are spotlighted on glass shelves.

Opaque slabs of local stone, put together in trios, form tables in the guest reception area. Original artwork (including stained glass and oil paintings) plus landscape photographs are on display throughout the hotel. 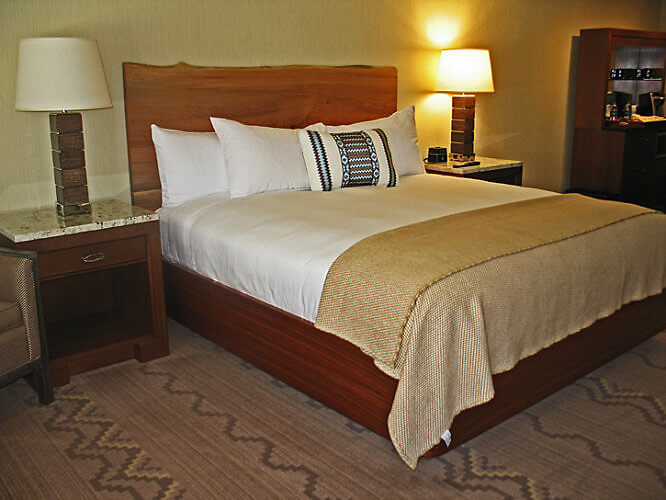 There are 247 guest rooms (including seven suites), each of which features down bedding, wool carpeting, Spanish tile showers, and granite countertops. Instead of the seldom-touched irons and ironing boards found in the typical hotel, rooms at Little America – Flagstaff each have clothing steamers. There’s also a 42-inch flatscreen television, complementary WiFi, a mini-refrigerator, and coffee maker.

Breakfast, lunch and dinner are served in the Silver Pine Restaurant & Bar. On the wall is a distinctive bas relief made of foam and plaster. Artist Ellie Ellis sculpted “Ponderosa Pine Cones and Needles” to highlight the eatery’s name.

A heated outdoor pool is open only in the summer, but the hot tub is available year round. Little America – Flagstaff also has a fitness center, kids’ playground, and business center.

And, as they say in the infomercials: wait! there’s more! The Little America Hotel – Flagstaff has 10 meeting rooms ranging in size from 225 square feet to an almost-6,000-square-foot ballroom. The banquet corridor is often used for vendor tables, registration, and buffet lines. Prefer to gather outdoors? That’s available, too.

The hotel is the perfect anchor for a hub-and-spoke tour of Northern Arizona. Several major attractions are within 80 miles of the hotel, including the Grand Canyon’s south rim and the eclectic offerings of Sedona, a town filled with New Age shops, spas, and art galleries.

Seven Arizona state parks also are within a drive of an hour or so. Other nearby attractions include these:

Lowell Observatory offers guided tours, widescreen multimedia shows, tours of the Universe in the 3-D space theatre, and opportunities to view the sky through the Alvan Clark Telescope.

Sunset Crater Volcano National Monument gives visitors a chance to experience the Colorado Plateau’s youngest volcano, born in a series of eruptions sometime between 1040 and 1100 CE.

Meteor Crater (actually a meteorite impact crater) is an international tourist venue that was used by NASA as one of the official training sites for the Apollo Astronauts.

Arizona Snowbowl, open year-round, offers skiing, snowboarding and more in the winter, plus hiking the rest of the year. At a base elevation of 9,500 feet, the Snowbowl is up to 40°F cooler than most Arizona deserts during the summer.

And, just beyond the hotel gates is the Historic Route 66 town of Flagstaff, now boasting nine craft breweries, and a host of little shops and restaurants.

Little America Hotel – Flagstaff is one of eight properties in the Grand America network owned by the family of the late Robert Earl Holding, a native of Utah. All are in the Western United States.

Rooms start about $150. You can make a reservation on the hotel’s website, or any of the usual hotel booking sites such as Priceline or Hotels.com.

(Photos courtesy of the Little America Hotel – Flagstaff, and Susan McKee, who was a guest of the hotel)