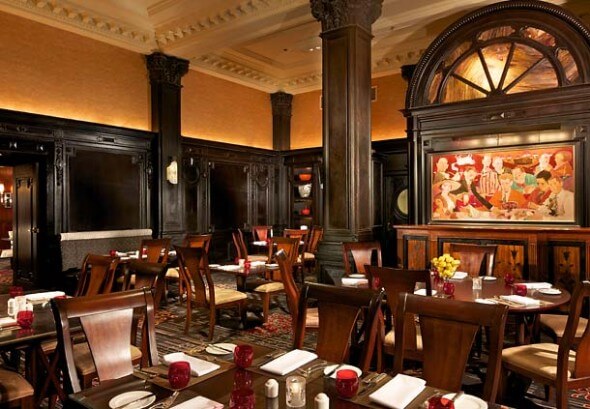 Algonquin Round Table Restaurant frequented by theatre and literary greats

James Thurber who penned The Secret Life of Walter Mitty, had a great taste in hotels, as well as, a timeless sense of  humor. Walter Mitty, Thurber’s creation, might have been a mild mannered sort on the outside, but Thurber himself leaned towards luxury. 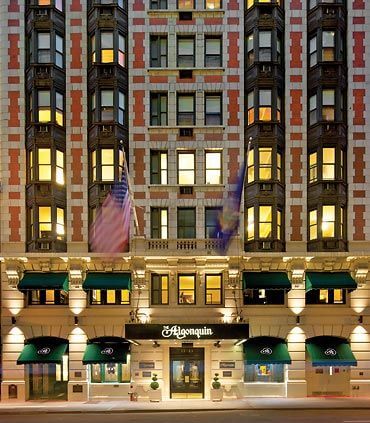 The Algonquin Hotel, one of James Thurber’s favorite stays, is a New York City gem. Opened in 1902 in the heart of Manhattan, The Algonquin, a red brick and limestone beauty, quickly became a meeting place of literary and acting greats. Douglas Fairbanks, Sr., John Barrymore, Gertrude Stein, Marian Anderson, Helen Hayes, Sinclair Lewis, William Faulkner and Maya Angelou are among the many who spent time here. Thurber, also known for his New Yorker cartoons, essays and other stories, stayed at The Algonquin whenever he came to the city from his home in Connecticut.

Since Thurber’s day (he died in 1961), The Algonquin has gone through changes. Most recently, as part of the Marriot’s Autograph Collection, The Algonquin Hotel Times Square reopened in 2012 after a multi-million dollar renovation. Although guest rooms have been updated with amenities like 37 inch flat screen TVs, iHome clock radios, signature pillow-top Algonquin beds with 350-count sheets and luxury bedding, other parts of the hotel have retained their original glory.

The polished wood, rich paneling and soft lighting of the lobby and The Oak Room, one of the best cabaret venues in New York City, according to New York Magazine, are still prominent features, and The Algonquin Hotel exudes a sense of highbrow culture and class like it always has. Its blend of old and new has landed it a spot on the list of “America’s Ten Great Historic Hotels” by Historic Traveler magazine. The hotel has also been designated a New York City and literary landmark.

When guests are not enjoying the hotel’s luxury and historic ambiance, the rest of New York City awaits for easy consumption. Times Square with its entertainment richness is a few steps away. Bryant Park and Rockefeller Center are also close.

If you go, use the hotel as a base from which to visit The New York Public Library, Grand Central Station, St. Patrick’s Cathedral, NBC Studios, and Radio City Music Hall.  Walking to the Empire State Building and MOMA, the Museum of Modern Art, is also doable. I know because I’ve done it, but I like to walk.

Book directly online at the hotel website or through Expedia.