Dumaguete, the capital city of the province Negros Oriental on the island of Negros is a destination to check out for its  rich history and proximity to dolphin and whale watching, beaches and easy access to the islands of Apo and Siquijor.

The Honeycomb Tourist Inn and La Residencia Almar are Dumaguete icons that capture a sense of yesteryear blended with the vibrancy of the Philippines today.  Both properties have moved to “now” with WiFi, air-conditioning, LCD TVs and modern bathrooms. Each include a restaurant and bar and are in walking distance of much of Dumaguete’s offerings.

Las Residencia Almar, built in 1901, was originally called the Al Mar Hotel and is the oldest hotel along Rizal Boulevard in Negros Oriental. A circa 1929 photograph on the wall of the lobby showing the president of Silliman University riding past the hotel in a touring car with the top down is just one indication of the hotel’s past.

Updates and modernization here have combined the original Spanish architecture with a contemporary look. The fine carved woodwork details of the stairway going to the second floor are just one example. Sitting areas are appointed with artwork and artifacts connected to Philippine history. There’s an artistic funkiness that appealed to my sensibilities that lean towards folksiness more than polish.

The hotel’s restaurant, Don Atilano named after Don Atilano Villegas, one of the governors during the American occupation of the Philippines is a fine dining option. Along with two other restaurants: Filipino and Wagagi, the food choices at the La Residencia Almar range from Filipino specialties to Japanese and Western fare. La Residencia Almar’s bar is a place to unwind as well.

Rooms here range from family style (one twin bed and a queen or two twin beds) to two twin beds. Decor leans towards sleek and simple. Ask for a room with a balcony to watching the bustle along Rizal Boulevard and the boats on the Bohol Sea. Book through the hotel’s contact page. Rates range from $32 to $47.

Honeycomb Tourist Inn with its 16 guest rooms also has an interesting past.  In the 1930, the original building burned down but was rebuilt in 1936 as a private residence. In the 1940s it was taken over by the Japanese Imperial Army for housing, but then went back to being a private residence until 1997 when it was converted into an inn.

Its Rizal Blvd. location makes the Honeycomb Tourist Inn a perfect starting point for exploring Dumaguete and enjoying the views of the sea and the strip of park between the boulevard and the water.

Due to the nightly music in the hotel’s bar, the Honeycomb Tourist Inn is not the quietest come nightfall, however, for those who like to feel part of the city scene, or those who can sleep anywhere, the historical element and pleasant staff can make up for the festivivites. The staff did let me know about the bar’s music so guests are not surprised. The colonial architecture first attracted me, and the building’s unique history is what drew me in. Plus, there are amenities. WiFi, AC, cable TV and a clean bathroom make me happy. There’s also a complimentary breakfast.  Book directly through the hotel for the complimentary breakfast, however. 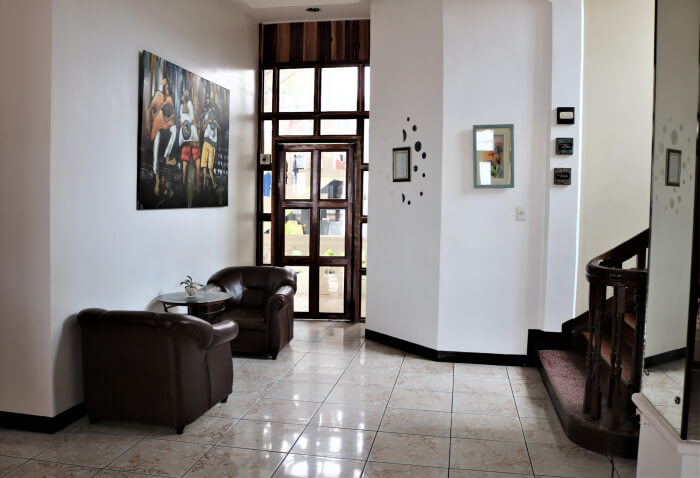 Lobby of the Honeycomb Tourist Inn

I’ve visited Dumaguete twice now and these two hotels were what caught my eye the most on this last visit. I am a sucker for authenticity and a sense of place. Both fit the bill and are worth considering. Go to Tripadvisor to see these, and all hotels in Dumaguete city.