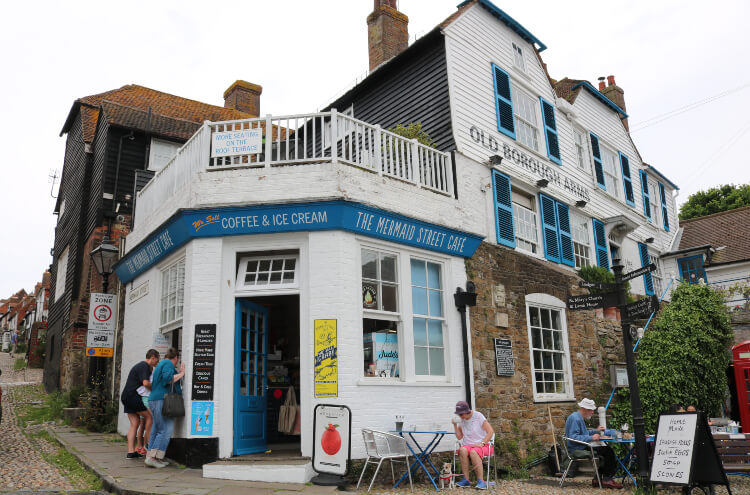 In Rye, England, a medieval town in East Sussex, a little more than an hour by train from London, Old Borough Arms Guest House is a gem of a B&B. Its history may date back to 1720, but Old Borough Arms’ updates are firmly in the modern day.

I picked Rye for an overnight getaway from the busyness of London because of its half-timbered houses, winding cobblestone streets and 14th century allure. Plus, most sights are within walking distance of each other. Located a block from the docks on River Brede, and just a few blocks from the train station, Old Borough Arms is near Rye’s must-see attractions like Henry James’ house, Ypres Tower Museum and Rye Castle, and the stunning bell tower view of St. Mary’s church.

When we arrived in the early afternoon, Ian who owns the inn with Sarah, his wife, met us and showed us to our one twin-bed, one double-bed room. If we hadn’t wanted to head out to see Rye’s offerings, we could have settled into cozy bliss for the duration. Cotton bedspreads, throw pillows, a wall paper accent wall with sea blue paint on the others was a soothing, aesthetically pleasing welcome. Bedside tables with their small lamps, the dresser, wardrobe and headboards gave a seaside cottage feel.

The bathroom, with its glass enclosed shower, free standing sink, and sand colored tiles was updated modern, as was the flat screen TV and free WiFi. Rooms also include fixins’ for tea and coffee which were much appreciated.

Before heading out, we stopped at the connected restaurant the Mermaid Cafe for a crab sandwich and a Cawston Press Rhubarb soda–both seriously splendid. Instead of eating at the street level, we climbed the stairs to the rooftop patio for the view. Inn guests get a 10% discount at the cafe that also serves up breakfast, ice-cream and afternoon tea.

Our breakfast, however, that started with off with a chocolate croissant, creamy yogurt, fresh fruit, muesli cereal, and coffee was included with our inn stay.  The hot made to order options that included eggs and breakfast meat were also yummy. Two common rooms serve as the breakfast rooms in the morning.

In the afternoon and evening, guests are welcome to use them as hang out places. We were able to leave our luggage tucked behind furniture after we checked out in order to wander some more before our late afternoon train back to London.

Along with making sure we were comfortable while we were at the inn, Ian and Sarah gave us pointers for heading out. There are walking maps of Rye attractions at the reception desk if you lose the one that you’ll find in your room.

Although we were at a pub in the evening, the Old Borough Arms Guest House does serve wine and beer in the afternoon and evening. This is when a trip to the rooftop would be perfect way to relax into the night.

A few pointers. If you can not navigate stairs this is not the place for  your overnight. The rooms are over three floors, and the stone stairs to the reception desk are fairly uneven and steep.

As a piece of trivia, large sections of the movie The Monuments Men were filmed in Rye. Some of the filming took place right outside the Old Borough Arms door. On the inn’s website you’ll see Bill Murray in a photo wearing WWII military garb with the crowd looking on. George Clooney was the director of this flick that starred Matt Damon as one of the central characters.

Our room was one of the nine en suite rooms that include a single bed room and superior king double in the options. On the third floor, The Tilling Suite has three bedrooms, a sitting room and a bathroom. Our room was roughly $150 a night. Dogs are welcome for a fee.

Our booking was though Hotels.com, but you can also book directly with Old Borough Arms as well. There’s not much difference in the price.