Tucked in the 350 miles between Warsaw and Berlin, the Lubuskie region is the star of Poland’s quietly growing wine industry. While there are already 400 wineries in the country, most are small, planting fewer than 20 acres of vines.  One of the largest and best vineyards in the region is also a hotel and spa, the Mierzęcin Palace Wellness and Wine Resort, a luxury resort with a surprisingly affordable price tag.

The front of the palace overlooks a sprawling garden

The Mierzęcin Palace hotel’s 66 rooms are set in a renovated palace on 200 acres of farmland, vineyards and forest. The palace was built in 1861 by the German von Waldow family. After World War II, the unscathed property was transferred to the Polish Treasury and between 1945 and 1959 operated as an orphanage. After that, its rooms were used as offices, a kindergarten, and workers’ apartments until 1992, before it fell into disrepair for several years. In 1998 the Polish paint company, NOVOL, purchased it and began the lengthy process of renovating it and converting it to a resort.  The building was gutted, the roof and all woodwork replaced and the mouldings, floors, and stonework carefully reconstructed. It reopened in its current incarnation in 2002. 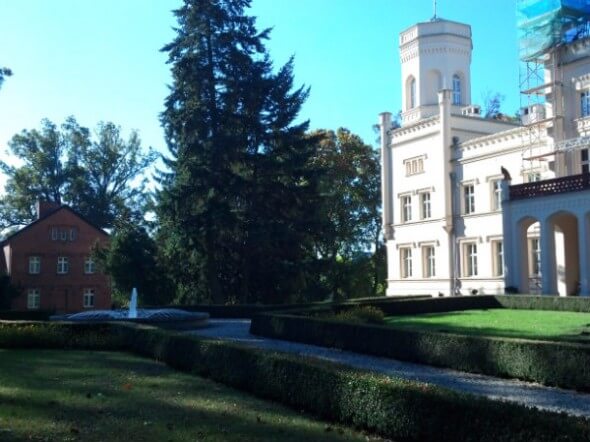 Upon arrival, the first thing I noticed were the meticulously landscaped grounds and the stately red-brick buildings – the winery, spa, and stable – that looked at once both modern and historic, like the setting for a Pottery Barn catalogue shoot somehow transported to the Polish countryside. A sign warned us to watch for horses before I spotted the riding ring and paddocks, which were located just across the brick driveway from the restaurant. The palace itself, its cream-colored façade partially covered with scaffolding for off-season maintenance, waited just beyond a fountain encircled by perfectly trimmed hedges.

Inside, a mix of old-world style and modern amenities created a juxtaposition that carried throughout the hotel. The dark wood staircase sas next to the glass-encased elevator that whisked me up to my pastel-hued room, which was spacious and offered a sitting room with a couch, a desk with a vanity mirror, a tv, and a twin bed with nightstand.  My room was one of the cheapest; rates start at 200 Polish zlotys, around $65 US.

My pastel-colored room was basic but very comfortable

Sheer white curtains hung in front of a window that looked down on the fountain and the driveway, where a black, curly-maned horse stood harnessed to an antique carriage. It looked like a modern fairy tale, which continued when I boarded the carriage for a ride around the property and through the surrounding beech wood forest.  In the winter, the carriage is swapped out for a sleigh but the rides cost the same – just 200 zlotys ($65 US) for a one hour ride.

On a carriage ride past the palace’s vineyards

The hotel was originally conceived as a meeting space for the company that built it, so it’s no surprise that it offers five conference rooms (which can hold up to 230 people), as well as an outdoor gazebo that I thought would be a beautiful place for a wedding.

The pool at the palace spa

The spa was created with equal care; there are hot and dry saunas, a Finnish sauna, Roman baths, steam baths, aromatherapy rooms, sensory grottos, and a variety of showers to choose from, all designed for proper muscle relaxation, blood flow stimulation, and skin purification.

Treatments all use the fruits of vineyard, incorporating wine, grapes, grape seed oil, and crushed grape seeds; treatments start at just 60 Polish zlotys (less than $20 US) with most between 160 and 250 zlotys (approximately $50-$80).

Guests who aren’t receiving a spa treatment can use the pools for 15 zlotys ($5) and the steam rooms for 30 ($10) for one hour; non guests pay just a few dollars more.

After soaking in the spa, horseback riding through the woods, or biking on the trails, guests can fuel up at one of the hotel’s two restaurants.

I enjoyed dinner in the distillery; the dining room of the converted restaurant is dominated by the old ironworks and the chef uses locally sourced ingredients – like plums, mushrooms, and freshly-killed game from the hotel’s forest – to put a modern and international spin on traditional Polish dishes. That night’s beef with mushrooms on potato latkes was delicious, especially when paired with the hotel’s award-winning wines.

The Polish wine-makers at Mierzęcin Palace trained for seven years in California’s Napa Valley before returning to run the wine program here. Now their wines regularly win top prizes among Polish wines and are served by the Polish president. Guests interested in learning more can take a tour of the winery, arrange a special wine-pairing dinner, taste the wines, or have a wine picnic out in the vineyards.

The view from my room at the palace

Room rates for single rooms start at 200 Polish zlotys (around $65 US) per night. Horseback riding starts at 35 zlotys and wine picnics can be arranged for 99 zlotys per person.

The hotel is located about two hours (on mostly two-lane country roads) from the train stop at Świebodzin, which is about halfway between Warsaw and Berlin. The hotel can help arrange for transport for those not traveling with a car.

I was a guest of the Mierzęcin Palace Wellness and Wine Resort but all opinions are my own.