You might not be able to stay overnight in Buckingham Palace, but you can still sleep where Queen Elizabeth did (well, Princess Elizabeth back then) when you stay at The Phoenicia, a landmark hotel situated at the entrance to the city of Valleta, the capital of Malta. And indeed, guests are treated like royalty at this luxury property.

The Phoenicia Malta has been a symbol of genteel Maltese hospitality since 1947, when the Mediterranean island was still a British colony. In that year, the fortress island was still rebuilding from the relentless bombing it withstood from the Axis nations during World War II — and could not even dream of becoming the world-class tourism destination that it is today.

Many of the original features of the early building have been lovingly preserved, most especially the authentic tiling on guest room floors. They have, in fact, been enhanced, and more improvements made, thanks to an ambitious $17 million renovation project undertaken in 2017.

Another of the most appealing aspects of the hotel are the breathtaking views — of the city and its harbors — afforded from virtually every room. None is more spectacular than the view of water and boats from the most unlikely of places: the hotel’s heated outdoor infinity pool, which is reached after walking through 7.5 acres of carefully landscaped gardens. 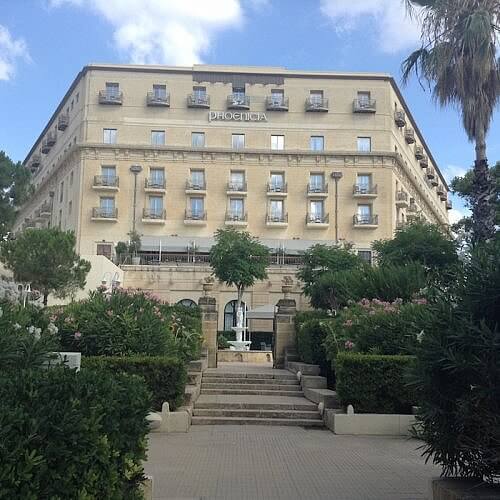 The renovations have modernized all the guest units, which still retain traditional creature comforts, like towel warmers in the bathrooms. Bathrooms are equipped with old-fashioned bathtubs, which have also been fitted with raindrop showerheads. The pampering amenities are from The White Company, which are favored by the hotels associated with Campbell Gray.

Naturally, guest rooms have all the 21st-century conveniences one has come to expect: self-controlled air conditioning and heating, LCD TV with international programming, writing desk, safe for valuables, built-in international electrical sockets, electric kettle for making tea or coffee, bathrobes and slippers. Free WiFi extends, of course, to all rooms as well as the public areas.

An unexpected but obviously welcome perk is the minibars in every room that dispense complimentary non-alcoholic drinks. Another bonus is complimentary onsite parking.

One thing that is not onsite — yet — is the spa and fitness room, which is currently under construction. In the meantime, there is an arrangement with a local gym for guests to be able to use its facilities.

Needless to say, no-one need leave the premises in order to eat. The Phoenicia is home to three restaurants: The Phoenix is the fine dining option, while the Cafe Phoenicia is less formal. In addition, The Bastion Pool Bar and Restaurant is open during the summer months.

There are no fewer bars/lounges than restaurants; open all year round are the Club Bar and the Palm Court Lounge. Both are opulent: the former, which welcomes guests in the evening only, is more intimate, with both indoor and al fresco seating; the latter, meanwhile, is situated opposite the main entrance, like an ornate lobby. It is here that a very English high tea is offered in the afternoons — complete with finger sandwiches, a selection of 12 high-quality teas, and scones with clotted cream.

Other menu items reminiscent of the former home country may be ordered at breakfast, which is largely a lavish buffet. To get an idea of the atmosphere, self-serve champagne greets diners; once you are seated, however, service kicks up a notch: one waiter brought a carafe of coffee to my table and pressed it, while yet another poured it into my cup.

As is the nature of a buffet, there is plenty of food, both ready-to-eat and cooked-to-order. Interestingly, all manners of eggs are included in the overall price — but if you want American pancakes, there is a surcharge. On the other hand, a generous variety of gluten-free foods won’t cost any extra.

Finally, it is worth noting that The Phoenicia Malta is affiliated with The Leading Hotels of the World — and also the first and only hotel in the country to be a member of the American Express Fine Hotels and Resorts Programme.

No. of rooms: 136 rooms and suites, in four categories;  46 units with balconies

Text and photos by Buzzy Gordon, who was a guest of the Malta Tourism Authority at The Phoenicia Malta. Additional photos courtesy of ThePhoenicia Malta.