It’s not often you get to walk the same halls as a famous beer baron, sleep in the same suite as a senator, drink in the same bar as a movie star, and stroll the same grounds as a princess. So many celebrities, dignitaries, and members of royalty have stayed at Ireland’s Ashford Castle that you can’t help but think of those who’ve come before you. 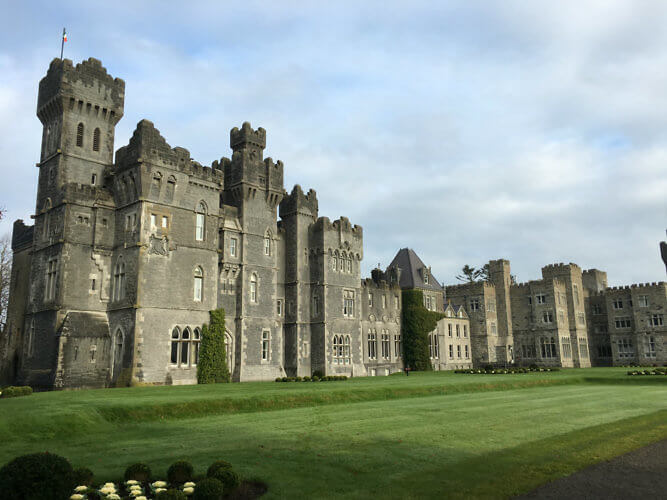 Set on 26,000 acres on the shores of Lough Corrib on the Mayo-Galway border, Ashford Castle is a member of the Leading Hotels of the World and the Red Carnation Hotels group, which purchased and renovated the castle in 2013. But long before Ashford became one of the best hotels in the world, it was home to the Guinness family. The estate was purchased in 1852 by Sir Benjamin Lee Guinness (grandson of Sir Arthur Guinness, the brewery founder) who added two large Victorian-style extensions to the existing building, added thousands of acres to the already expansive property, and planted thousands of trees. Between then and now, it became a hotel that hosted the likes of John Wayne, John Lennon, Oscar Wilde, President Ronald Reagan, Brad Pitt, and Princess Grace. It’s also been the backdrop for movies like The Quiet Man and shows like CW’s Reign.

Today it’s much more than a hotel; it’s a grand estate where once you check in, there’s no need to leave, and you truly get a chance to feel like royalty. In addition to the hotel’s 77 rooms and 6 suites, there are several restaurants and bars, a spa, stables, falconry school, cinema, tennis courts, a golf course, and acres of trails to explore.

My husband and I arrived on a foggy, drizzly winter afternoon—the perfect atmosphere to arrive at a grand Irish castle, if you ask me—and were greeted by name, offered a hot whisky and cider, and shown to our room, the splendid Kennedy Suite, named after US Senator Ted Kennedy, who stayed at Ashford in the early 1980’s. Set in the oldest wing of the castle with a view of the lake, it has soaring ceilings, a marble bathroom fit for a sultan, a gas fireplace, floor-to-ceiling windows, and antique furniture including a 19th century walnut bed outfitted with beautiful silk drapery. Of course, the modern conveniences weren’t forgotten; there was free wifi, cable TV, a USB phone charger, heated bathroom floors, and electronic shades. Small touches, like complimentary in-room sherry and fresh flowers only added to the feeling of pure luxury.

Outside of our room, the castle beckoned, so we headed out to the Connaught Room, for afternoon tea. In the very room where Mrs. Guinness herself often hosted afternoon guests, we sipped tea and champagne and nibbled delicate finger sandwiches and savory scones with clotted cream with a view of the fog-shrouded lake. That evening, we explored more the castle, enjoying a drink in front of the fire at the Prince of Wales Bar (named for the 1905 visit from the Prince of Wales, who later became George V of England), and then feasting on tender Irish lamb and fresh Atlantic lobster in the Dungeon restaurant.

The next day, we rose early for breakfast, and indulgent event that featured smoked salmon, eggs benedict, scrambled eggs with truffles, and other dishes fit for a king and queen. We fueled up for two activities we’d booked for the day: a ride around the castle grounds on stout Irish horses and an afternoon at Ireland’s first school of falconry on a “hawk walk,” an exhilarating walk of the grounds calling and releasing a majestic Harris Hawk, which, when tempted with a bit of raw chicken, would glide from the trees and come to rest quietly on our outstretched arms. In the evening after dinner in the nearby town of Cong, we retired to the Billiards room for a few pints of Guinness and an attempt to play a game of snooker.

In our two days there, we wanted for nothing. Our in-room sherry was refilled every night. When we went horseback riding, we were provided with leather paddock boots. On the hawk walk, we were welcome to use the castle’s waterproof parkas and rubber Wellington boots. If we wanted to leave the grounds, we could hitch a complimentary ride in one of the castle’s Land Rovers.

On our final morning, we lamented that two days simply wasn’t enough. We didn’t have time to see a movie in the cinema, have a treatment in the spa, or go for a boat ride or a kayak around the lake. We wished we’d have a few more hours for a carriage ride, or an archery or clay-shooting lesson. We didn’t get a chance to ride bikes around the property, try out the zipline, or play tennis or golf. We needed a few more days to eat in all the restaurants and do all the activities. With so much to see and do on the grounds, we realized we needed at least a week to do it all.

Instead, we decided to appreciate our last few moments at the castle. We sipped coffee in our plush robes as we warned in from of a roaring fire in our room. After breakfast, we took a final stroll around the grounds to admire the gardens and watch the fog roll in over the lake. And we partook in a favorite activity of all guests at the castle: a meet-and-greet with the castle’s two resident wolfhounds, Cronan and Garvan. Guests can opt to accompany the two massive, shaggy dogs on their morning week, or join them post-walk in the hotel lobby for kisses and cuddles from these gentle giant’s.

Our two days at Ashford Castle were packed full of adventure and activities that brought us closer to the soul of Ireland. We learned about ancient traditions, sipped Guinness where the grandson of the famous brewer once lived, and got a small taste of life in an Irish castle.

Go to the hotel website to check current rates. You can compare rates at one of the many booking sites such as Hotels.com.

I was a guest at Ashford Castle, but all opinions are my own.