When the major magazines post their dubious readers’ polls on the best hotels and resorts in the world, Mexico always has an outsized number of them. The AAA 5-diamond award winners from Mexico are always many times what you’ll find in, say, Canada or Brazil. Still, it’s always a surprise to find a full-blown luxury hotel in some oddball, out-of-the-way place like Tepatitlan. Grand Hotel Tepa is not just a place with an aspirational name however. It really is something grand.

Tepa, short for Tepitatlan, is the administrative center of a farming region between Leon and Guadalajara, most notable as being the area producing more eggs than anywhere else in the country. 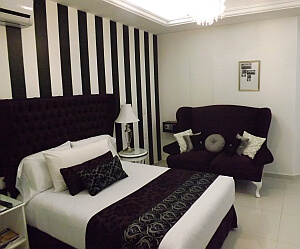 I was taking a holiday break with my family in the state of Jalisco and when the Haciendas and Casonas of Jalisco group invited me to come check this place out, I went in not expacting much. The Mexican owner and his French-born wife are the types who don’t believe in doing things halfway though, so I ended up being blown away by what I found.

Picture a hotel on a typical Mexican street a couple blocks from the main plaza in town, squeezed in between multiple buildings and stores selling clothing and office supplies. The entrance and nice marble lobby with a bar and grand staircase provide a good first impression. A stained glass dome is at the top of the building, over the marble and iron railing stairway extending up the top. So it’s clear from the beginning that the Grand Hotel is not just a mid-range hotel supplying the basics.

It’s the rooms themselves though that take this property from “very nice” to “Wow!” Each room is different, but not just slightly different. Instead you get full-blown theme suites that take one point of differentiation and then really run with it. This starts with “Contempo,” “Thai,” and “Zen,” but then gets more elaborate as you climb up the scale on rates and size. There’s the Neruda suite in honor of the Chilean poet and Rangel, which features artwork from the Mexican artist Alejandro Rangel Hidalgo. Marie Antoinette (pictured at the top) is in full-blown French period style and has its own little courtyard sitting area.

The Chanel suite honors Coco Chanel, with her fashion creations and perfume bottles used as inspiration for the furniture and decorative elements. Naturally in these artistic suites, the TV has a frame around it and the bathroom fixtures cannot be found in your local Home Depot.

It gets wilder though, and in the case of the Mandela suite, literally. This one is set up like an African tented camp, complete with animal horns and a bed surrounded by netting. My favorite though was the most elaborate of all: Alambra. Picture a luxury Moroccan Riad suite done up in full-blown Moorish style, with intricate arches, hand-painted tile, and hand-blown glass lanterns. No matter which direction you face, the room is a marvel.

In the hands of a designer without any restraint, this whole concept could have turned out silly, something to snicker at instead of celebrate. Every room is tastefully done and true to the theme without exaggeration. Everything is in its place and set up just right, so that not only do the habitations look great, they’re functional and comfortable.

The one food outlet on site is a Parisian style restaurant where the excellent included breakfast is served, inside or out depending on weather. You’ll need to venture elsewhere for lunch or dinner, but there are a few good places in walking distance, including another out-of-place oddity: an American-style bar/restaurant with burgers, ribs, and a few dozen imported beers on tap.

A small spa on site is also attractively designed and is a relaxing space for a single or double massage treatment.

The level of English proficiency here is not what you’ll find in Guadalajara down the highway, but the staffers are friendly and helpful. Rates start out at $150 per night and top out at twice that for the largest suites in holiday seasons.

There is complimantary parking here if you’re driving west on a trip to Tequila, Lake Chapala, or Puerto Vallarta. Get more information in English at the Haciendas y Casonas site, or in Spanish at the Grand Hotel Tepa website. You can also book it through Travelocity.

Editor Tim Leffel is an expat in Mexico who was a guest of Grand Hotel Tepatitlan while traveling through the state of Jalisco.