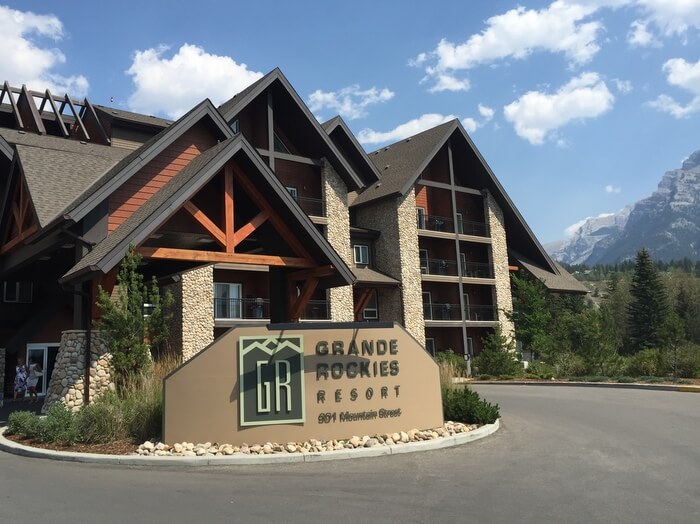 Canada’s Rocky Mountains are a tremendously popular travel destination, and with good reason — it’s a spectacularly beautiful region. The peak season for exploring the Rockies, particularly if you’re road-tripping as I was this summer, is relatively short. The months of July through September, when everything is open and the roads are snow free, draw the most visitors.

Like many of those visitors, I was exploring Banff National Park in August, and while the park has miles of uncrowded trails and peaceful lakes, the town of Banff itself can feel a little like a New York City sidewalk, with shoulder-to-shoulder people. Accommodations, in Banff in August, can be challenging to find if you haven’t made your reservations well in advance.

Fortunately, I found an alternative when I spent a couple of days in the town of Canmore, Alberta. Just 20-minutes’ drive from the Banff National Park entrance gates, Canmore can be a convenient base for exploring the region. And as I learned, the town has plenty of charms of its own. 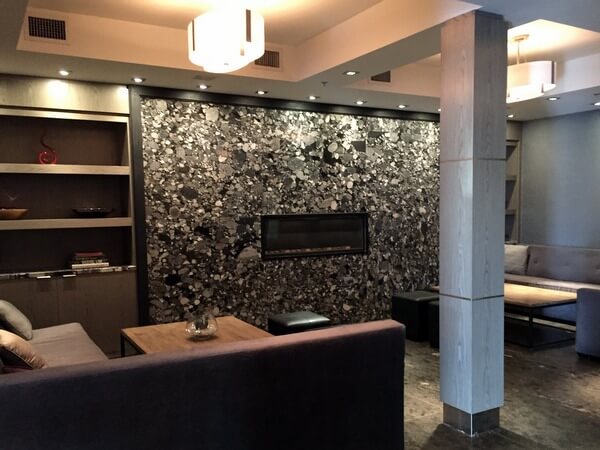 My base in Canmore was the Grande Rockies Resort, a 150-unit condo-style hotel that was built in 2010. Starting from the lobby, which features a fireplace set into a rock wall, the Grande Rockies feels more urban and stylish than your standard mountain condo lodge.

Also on the lobby level is the Grande Kitchen & Bar, open for breakfast, dinner, and cocktails.

The hotel isn’t too stylish for families, though. In fact, it would be a great destination for a family holiday, with large guest suites and amenities that include an indoor pool with a curlicue water slide.

Younger kids can splash in their own pool, complete with its own frog.

And if you’re not getting enough exercise in the pool or out in the mountains, you can work out in the small third-floor fitness room.

The suites all have full kitchens that would look right at home in any city apartment, with granite countertops and stainless steel appliances. There’s a stacked washer-dryer in an adjacent closet, and each unit gets a complimentary packet of detergent; it’s a little thing, I know, but it’s a nice touch, particularly for families or long-term travelers.

The living rooms have comfortable leather sofas, fireplaces, and sliding doors that open onto decks with gas barbecues.

I also liked how my suite had a big salad bowl on the counter. Like I could have made myself a big salad, instead of going out and eating an Alberta bison steak!

The beds have Frette linens and comfy bathrobes. Wi-fi is complimentary (and worked well), and there’s a work desk in the bedroom. The units are all air-conditioned.

Canmore is surrounded by mountains, including the iconic “Three Sisters,” the trio of peaks that I could see from my window. The “sisters” are named Faith, Charity, and Hope, and the tallest is 9,632 feet (2,936 meters) high.

The other building that you can see in the photo (above) is also part of the Grande Rockies Resort. This Annex building has smaller studio suites, more like standard hotel rooms. These economical units are furnished in the same modern style as the condos, but don’t have kitchen facilities. They’d be a good option for couples or solo travelers who just need a comfy base in the area.

But perhaps, had I been fortunate enough to stay longer at this otherwise comfortable resort, I’d have figured it out.

Or maybe I should have just used my head….

From the Grande Rockies Resort, you can walk into downtown Canmore in about 15 minutes. By car, it’s about a five-minute drive.

Along the way, you might pass this more-than-lifesize sculpture by Canadian artist Alan Henderson. It’s called Ceannmore, which is Gaelic for “Great Head.” It weighs seven-and-a-half tons.

For a small community, Canmore has a surprising number of excellent restaurants, including the long-established Crazyweed and relative newcomer PD3 by Blake, which is serving Asian-style street food from a silver 1960s double-decker bus.

Canmore has lots of great hiking trails, including the popular Grassi Lakes Trail, which has views like this (above).

If you’re feeling energetic, you can even ride a bike between Canmore and Banff along the paved 14-mile (22-kilometer) Legacy Trail.

Of course, you can always hop in your car and head up the highway to Banff National Park and to Banff’s many attractions.

But you may find that, from the Grande Rockies Lodge to the silver street-food bus to the giant head, Canmore holds plenty of appeal on its own. You can make your reservations directly on the Lodge’s website or book through Travelocity.