If you’re searching for a haunted experience, book your stay at one of the Historic Hotels of America, with more than 110 historic hotels still home to friendly haunting. With years, sometimes centuries of history, this group of historic hotels will give you real life ghost stories in an elegant setting. More than 25 hotels report ghost sightings since the early 1930’s. 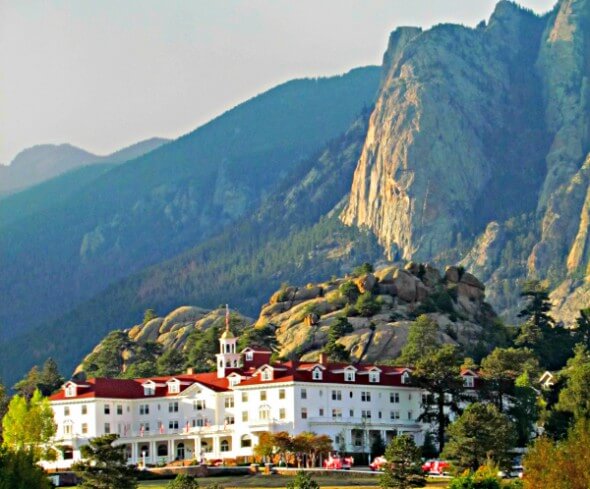 From ghost tours at the Francis Marion Hotel to the Halloween bash “Nightmare on Hawthorne Boulevard” at the Hawthorne Hotel, haunted happenings and ghosts are big at Historic Hotels of America.  Take a look at these top 5 spooky Historic Hotels to get your haunted on.

My most recent haunted historic hotel experience happened at the Stanley Hotel in Estes Park.  After being royally spooked by the night ghost tour, I finally settled into my room at the adjacent Lodge and fell asleep only to be woken by the intense smell of roses. The next day I discreetly asked if perhaps the hotel piped scents into the rooms, and the answer was a firm no.

Later, while consulting with Madame Vera, I told her I thought I had a visitor the night before. Without any further details, she smiled and said, “Ah Mrs. Stanley visited you!  Did she leave roses?” When I said yes, Madame Vera said that Flora Stanley, the owner’s wife, often paid a visit to single women in a matronly protective way by bringing “roses” to their room. 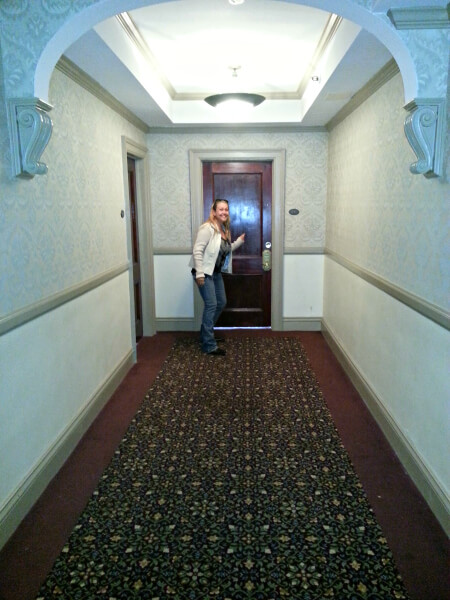 Room 217 at The Stanley Hotel where Stephen King was inspired to write the Shining.

Located in the center of Santa Fe, La Fonda on the Plaza (1922) tells tales of Old West brawls and shoot outs. In 1867, the hotel lobby was the scene of a shoot out of the Honorable John P. Slough, chief justice of the territorial Supreme Court, who is rumored to still be seen in the hotel’s hallways. Another ghost is a salesman who jumped to his death more than a century ago after losing all of his company’s money in a card game.

The 1886 Crescent Hotel & Spa in Eureka Springs, Arkansas was an experimental cancer hospital in the 1930s. “Dr.” Norman Baker, a non-licensed physician, examined cancer patients in the basement, taking many families’ life savings! Several ghostly visitors from the hospital are seen in the hotel today, including “Dr. Baker” in the hotel lobby and a “nurse pushing a gurney.” In Room 419, housekeepers report meeting “Theodora” who introduces herself as Dr. Baker’s cancer patient and then vanishes. Frequent paranormal sightings here rank this hotel as one of the most haunted in the U.S.

In the early 1900s at the Sagamore (1930) in Bolton Landing, New York, ghostly legend tells the story of a maid having an affair with a gentleman during his summer stay with his wife. When his wife heard about it, the man broke off his affair, and the maid confronted him in his room. When the wife walked in, the two women wrestled and the wife strangled and killed the maid. The couple checked out of the hotel immediately, and the maid’s body was found the next day, with the assumption that she died of natural causes. The maid continues to haunt the room by turning the lights on and removing blankets. The room gets very cold, enough that couples will asked to be moved.

It seems that a 1920’s bellman has forgotten to clock out at the Jekyll Island Club Hotel (1886) in Jekyll Island, Georgia. The ghostly bellman, dressed in a post WWI period cap and suite, is very particular about delivering freshly pressed suits to bridegrooms. He’s primarily seen on the second floor of the club building, and more than one bridegroom has asked about the bellman.

This is just a snapshot of the haunting at the spooky Historic Hotels of America, and during this ghostly season, these hotels offer a few ghostly packages for fall.  Details at  their website.