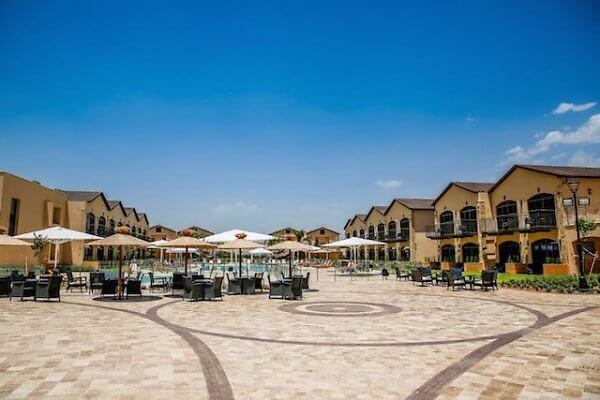 The panhandle of the Upper Galilee, which has long been a popular domestic tourist destination for Israelis, has no shortage of modest accommodations — commonly known as “country lodging.” Just last year, however, the region welcomed a new hotel complex that represents a major upgrade for the area’s hospitality infrastructure.

Galilion is more than just an upscale hotel: it is a complex comprising 120 rooms and suites, a convention center, a spa, and a wine-tasting boutique. Even the spacious, inviting, dedicated pool is another first for this relative backwater: most local rural lodging options offer their guests limited pool privileges at the communal pool belonging to the host kibbutz.

Galilion is ideally situated for visitors arriving to enjoy the area’s attractions and recreational activities. The hotel itself is practically on the grounds of the Hula Valley Nature Reserve, an ornithologists’ paradise during intercontinental migratory seasons. It is also the gateway to the Golan Heights, whose snow-capped Mount Hermon is Israel’s only skiing destination. Adrenaline-pumping sports, such as rafting and hang-gliding, are close at hand.

In fact, Galilion is introducing its own new tourist attraction, the Agamon Skyride: a hot-air balloon that carries passengers 150 meters in the air, affording stunning views of the Sea of Galilee and the rolling hills and valleys of northern Israel and southern Lebanon. The hotel also sponsors a variety of weekend activities, many of them family-oriented, such as outdoor movie screenings (complete with popcorn), and campfires (marshmallows provided) with professional musical entertainment. 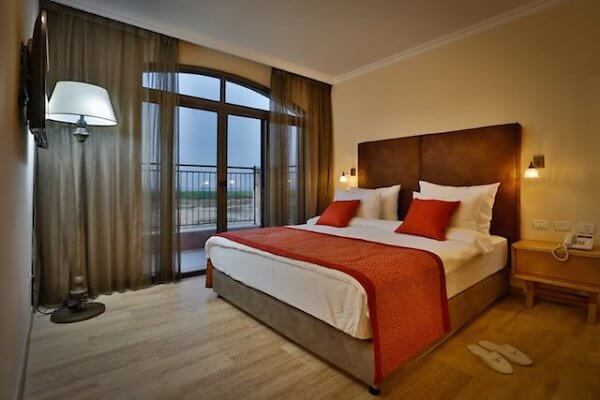 Most important for the guest seeking creature comforts is the new level of sophistication Galilion brings to a region where lodging choices are largely characterized by furnishings — and especially beds — that could most charitably be called basic. Each room contains a double bed with extremely comfortable mattress — in marked contrast to a frequent norm in Israel’s countryside, which is twin beds pushed together.

Other more urban amenities in the rooms include large, flat-screen, smart IPTVs, electronic safes, minibars, electric kettles for making tea and coffee, and bathrobes and slippers. The central air conditioning is conveniently controlled by a user-friendly digital thermostat, while free Wi-Fi extends to all rooms and public spaces.

All guest rooms feature either a balcony or a patio, and the patios of ground-floor rooms afford direct access to the pool. All rooms also contain sofas that opens into beds that can accommodate two children.

There is a kosher restaurants on the property, as well as snack bar in the lobby. The restaurant serves buffet meals three times a day, with sufficient variety to satisfy all comers, and even a children’s corner. In particular, the complimentary breakfast buffet is a cut above what is offered in most rural Galilee hotels: there is an omelette station, an espresso and cappuccino machine with unlimited refills, and an amazing selection of exotic preserves.

For pre-dinner drinks, it is hard to beat a visit to the wine boutique, which offers free tastings of wines from premium Israeli wineries. In addition, there are free samples of draft beer from Bazelet, the Golan Heights’ best known brewery.

The nearby Golan Heights, home of Israel’s best cattle ranches, is also famous for its popular steakhouses. More fine dining options exist in the historic town of Rosh Pina, just a few kilometers down the road.

Finally, the Galilion spa is impressive even by big city standards. The spa menu details a large variety of international massages and beauty treatments, for men, women and couples. Most distinctive is the large, gleaming Turkish bath, which is outfitted with two tables for additional special treatments.

Text by Buzzy Gordon, who was a guest of Galilion for purposes of review. Photos courtesy of Galilion.