The Fairmont Pittsburgh opened in 2010 just as the city was in the midst of its renaissance. The fact that the former steel town attracted such a luxurious, five-star property spoke volumes about the forward momentum happening with a healthy amount of investment coming in. The brand new mixed-use, LEED-certified building was symbolic of Pittsburgh’s modern spirit.

For anyone coming to the city for the first time, this property is in a perfect location to explore the wealth of attractions downtown and nearby. For those who love culture and/or sports, Pittsburgh ticks all the boxes.

Let’s look at sports for a minute. You’ve got NFL football (the legendary Steelers), NHL hockey (the Penguins) and baseball with the Pirates. The venues for all of these teams are within walking distance of the hotel. Coincidentally, during my last visit to the hotel, there was a steady stream of well-dressed hockey players walking through the lobby area. I don’t know who any of them were, but I did ask a bellman who confirmed they were from a visiting NHL team.

On the cultural front, the Fairmont Pittsburgh is at center stage for theater performances, a world-class symphony and museums. Ask the concierge to help you snag tickets for Heinz Hall, which welcomes a steady stream of the best Broadway shows. There’s also O’Reilly Theater, the Benedum Center, the Byham and Wood Street Galleries. The Andy Warhol Museum is close by as well. As the world’s biggest museum devoted to a single artist, it’s worth a visit, especially for modern art fans.

You’ll also want to walk to The Strip, a vibrant area that is home to iconic, local eateries and shops, specializing in everything from biscotti to charcuterie. Book a food tour if you’re short of time and want to hit all the highlights with help from a knowledgeable guide.

Of course, you should also plan some time to just enjoy the hotel itself. Over its seven-year history, it has already racked up plenty of awards and rave guest reviews. Local is a big selling point, but this 185-room property is also earning kudos for its attentive, swift service and its amenities.

Its health club and spa goes beyond what you usually find in hotels. It’s not tucked away in a dingy basement somewhere. This one is bright and light. It’s a state-of-the-art, 6,000-square-foot facility, stocked with a great range of high-end Precor equipment, plus day-use lockers, a cedar sauna, a eucalyptus steam room, relaxation areas and private showers.

Book a spa appointment to put a cherry on top of your vacation. Some services incorporate aromatherapy to help put you in the zen zone. The Enrich Yourself body treatment is 90 minutes of bliss. It starts with a warm foot wrap, then moves to massage and an application with warm oil to the scalp. From head to toe, skin gets a fresh glow.

After you’re feeling super chill, your guest room is an ideal place to keep the relaxation going. The rooms with their floor-to-ceiling windows are spread over floors 14 to 23, which affords them great views of the downtown skyline, plus Pittsburgh’s famous rivers, Mount Washington and bridges. The furnishings are contemporary and the décor palette is warm and rich with dark wood, burnt orange and gold tones.

The hotel’s signature restaurant, Habitat, closed in spring 2017 and renovations are currently underway on a new, yet-to-be-named space. The big news is that Jean-Paul Lourdes, a well-regarded chef who has an extensive background cooking around the world. Raised in Japan by French parents, he has worked in top kitchens alongside superstars like Alain Ducasse and Joel Robuchon. Stay tuned for details. The new space is already showing great promise. 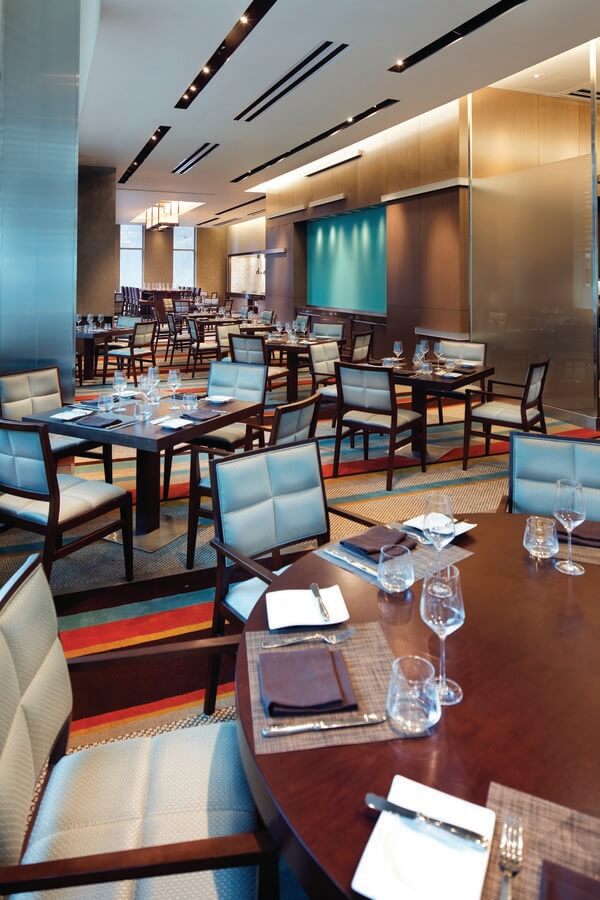 Fortunately, there’s no shortage of great restaurants close to the hotel. The concierge recommended Pizzaiolo Primo, an excellent Italian restaurant that offers top-notch pizza and pasta (like the seafood linguini in a spicy marinara sauce).

Along with the hotel’s new restaurant, former guests are also hoping for the return of a canine ambassador. The previous one, Edie, retired in November 2016. For travellers who miss their dogs at home, this  four-legged ambassador was available to take for walks and for furry cuddles. Even without a canine ambassador, you’ll get a warm welcome when you arrive. The staff here really understands hospitality, making guests happy to chill and stay awhile.

Room rates start at US $200 per night at the hotel website. Compare rates at Travelocity or Hotels.com.

Michele stayed as a guest of Fairmont Pittsburgh. As always, her thoughts and opinions are her own. Photos courtesy of Michele Sponagle, Visit Pittsburgh and the hotel.

Michele Sponagle is a prolific travel writer who has traveled to more than 70 countries in pursuit of adventure. She has tracked polar bears in northern Manitoba and learned to make curry from scratch at a cooking school in Singapore. She contributes to many top media outlets, including Refinery29, SmarterTravel, iExplore, Foodal.com, among others.