There’s no getting around the fact that modern Kathmandu is a traffic-choked mess, a place to see the main sites and then escape the pollution. The Crowne Plaza Kathmandu Soaltee makes your stay in the city far more civilized than at most properties though, with its 12 acres of land providing a buffer from the urban woes.

As with the Park Village Resort we reviewed last year, the Soaltee was built back when there wasn’t a city on the edge of its property. This place was out in the countryside when it opened 50 years ago, an escape from the historic center 2.5 miles away. As Kathmandu has expanded rapidly with Nepal’s growing population, the city has swallowed it up. It will now take you at least a half hour to get that far in the daytime by automobile.

Despite its age, the Soaltee Crowne Plaza is still the prime convention hotel in the capital of Nepal, hosting up to 1,200, so I spent a lot of time there during a big tourism conference. It became my home away from home for a while, leaving me perplexed about a few aspects but really impressed about others—especially the terrific food. 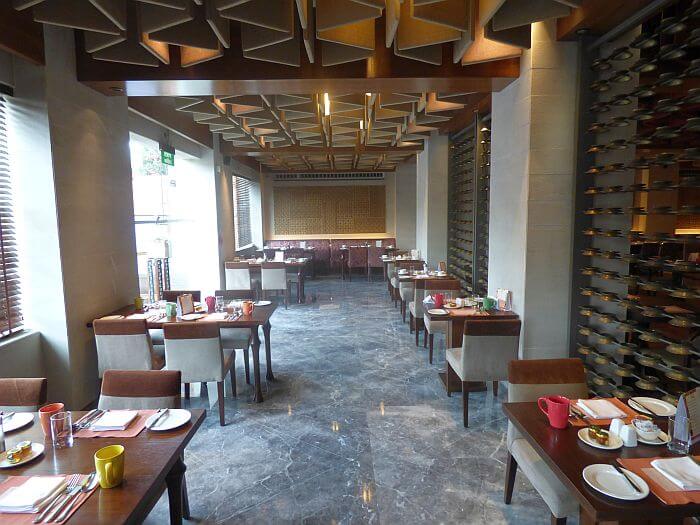 You normally don’t expect to be saying, “The food was fantastic” when you stay at a business hotel serving a lot of big groups. I at a lot of meals here over many days and found everything to be authentic and flavorful, never watered down to please the international visitors. At the same time, breakfast choices made nods to different cultures, while still serving up a masala dosa from the omelette bar or curry dishes most westerners would probably associate with dinner alongside the eggs and sausage.

Even the buffet food was good every time, though the perplexing part came in when a luncheon for 200 would have seats for 100, with a half-full tent and an acre of lawn space free. When it happens once you figure there was a miscommunication from management. When it happens three times, there’s an institutional systems fault somewhere. (No there wasn’t a cultural reason for  serving 200 but seating 100: the Nepalis were as befuddled as me.)

Besides the main restaurant with indoor and outdoor seating, there’s an oddly named Al Fresco Italian restaurant where all seats are inside, but the food is highly regarded. The formal Kakori Indian and Nepali restaurant is in the same separate building by the pool and is open for dinner only. A Chinese restaurant is popular with visiting East Asians at lunch and dinner.

The indoor bar and lounge is a bit stuffy with its lack of natural light, but you can also order a drink at the coffee and pastry patio area outside that overlooks the lawns. If you really want to party late into the evening, head to the on-site casino and drink complimentary drinks while you’re gambling at the tables—with Indian rupees oddly enough.

The highlight here is the large and attractive swimming pool, a beautiful space with lounge chairs, fountains, a decorative brass bell, and a lawn view.

The spa and fitness center were both under construction during my visit, but will be bigger and better when the reopen again after major renovations. The enlarged spa will have steam, sauna, and whirlpools for men and women and the full fitness center will be getting some new equipment.

It’s rather hard for me to report on the rooms at the Soaltee Crowne Plaza since they were in a state of flux while I was there and will continue to be for some time. The rather tired-looking room I was in was functional, but showed many signs of wear and way too much brown. One whole wing of the hotel was shut down for renovations and while the sizes will stay the same, the newer, fresher design is both more traditional and brighter. It has many nods to Newari culture with its wood screen looks and wood shutters, but has white walls and red color accents that feel more cheerful.

Amenities are in line with what you would expect at most Crowne Plaza properties, with safes, TVs, good air -con, fridges, decent toiletries, and comfortable bedding. There are some good throwback elements, like a shoeshine service, and some bad throwbacks, like the smell of cigarette smoke. (They still have smoking rooms here.) One of the main negatives is Kathmandu’s problem more than the hotel’s: the power, and therefore the Wi-Fi, will probably cut out on you at least twice a day. A generator usually kicks in a minute or two later, but save often if doing work on the laptop.

Staffers are quite friendly and hospitable at this resort-like city business hotel and seem to be trying hard to make sure everyone has a pleasant stay. If you need to return home with some souvenirs, there are two shopping arcades on site too with a few stores each, plus a small one tucked into an alcove just off the lobby.

Rates at the Crowne Plaza Kathmandu–Soaltee Hotel vary seasonally and with conventions, but standards generally run $110 to $200 per night, with the renovated rooms and club floor ones commanding a premium. Book direct with IHG or check rates at Expedia.

Review and photos by editor Tim Leffel, who was hosted by the Nepal Tourism Board and the Pacific Asia Travel Association while speaking at the Himalayan Travel Mart conference. All opinions are his own.