You’ll be forgiven for picking up speed as you walk toward the entrance of The Brooklyn, A Hotel, located on a desolate stretch of Atlantic Avenue that is anything but comforting. Like a Mean Streets version of Hansel and Gretel, a line of urban shrapnel follows one after the other: broken bottles, brown paper bags (and black plastic), rubber gloves, and long dormant cigarette butts.

If you’ve got a sneaking suspicion this section of the Bedford-Stuyvesant neighborhood has seen better days, you’d be right. But as the Great Brooklyn Gentrification moves east from adjacent Prospect Heights and north from Crown Heights, change is in the air.

Stepping through the double sliding glass doors of the redbrick hotel soon after it opened in September 2015, it was clear to see the developers (who wish to remain anonymous) meant business, as did the serious-looking, and seriously dressed, doorman, who scanned me for trouble, then nodded. Mounted above the check-in desk, the hotel logo—one part boutique, one part Hip Hop, one part sport—blazes out, while behind, a wall-sized 19th-century Brooklyn scene adds a vintage flair. 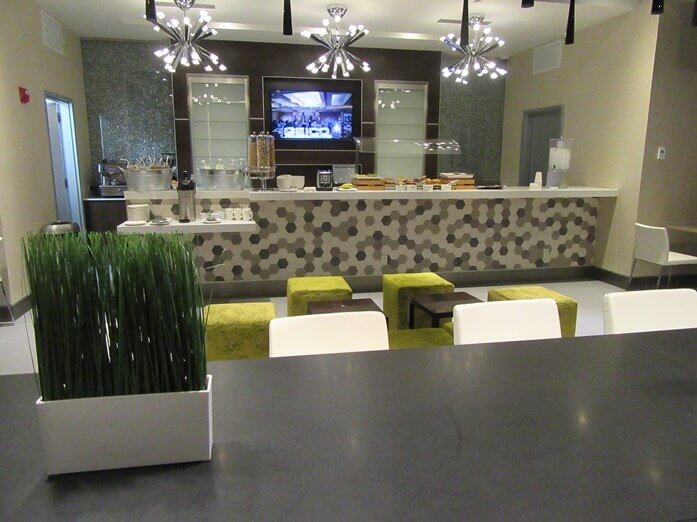 The lounge at the Brooklyn

There’s a more disco-tech effort put in the lounge beyond. Colors pop in concentrated points—a purple rug, mustard stools, green plants, and ever flickering flat-screens in several places. It’s not a designer’s paradise, but it’s certainly warm, friendly, fun, and functional enough to grab a drink in. However, it gets busiest in the morning, serving an above-average continental breakfast.

Breakfast at the Brooklyn

Upstairs, 34 rooms spread out across three floors. Room layouts are not all equal, owning to the shape of the former warehouse, but this adds charm (Nonetheless, you might want to peek at available rooms before selecting if layout is important). Classes break down into standard and junior suites (starting at $202, plus one presidential suite (starting at $448 per night), which I stayed in. However, I was surprised to learn that after the fact, as the room didn’t look significantly bigger or better than other rooms. Indeed, other rooms had more attractive elements. Nonetheless, all were impressively designed by Espacio Design.

Presidential Suite at The Brooklyn

It’s not just the harmonious blend of brick and snow-white plaster, or the pops of color, that appeal so much in the rooms, but also the charming touches of Brooklyn pride—by picture (Williamsburgh Savings Bank above my bed) or prose,  scrawled on wall above the sofa. The bathroom impresses as well, with a rain shower big enough for five people and with an almost equal number of stream settings. New York’s own Beekman products also make it worth a long linger, as the room does itself, with two flat-screens for entertainment, a desk for work, and Nespresso machines and Tealeaves tea for verve.

Indeed, The Brooklyn does most things right and is a pretty amazing value for New York City. Were the location elsewhere, I’d unreservedly recommend the hotel, but it’s admittedly a challenge to overlook the shabbiness of the area and other guests were overheard to express the same concern. The location is further choked off by the raised Long Island railway track just out front,  and there are not any shops nearby (at least by New York standards), with the closest spot to buy food at a gas station.

Thankfully, that’s expected to change soon as the strip is further developed, and a La Quinta is already moving in a few doors down. For travelers seeking a more authentic Brooklyn, the neighborhood’s grit may be just the thing you are looking for, not to mention the chance to see gentrification on the front line, as the boho-boutique vision begins laying claim to BedStuy. This is the vision the Brooklyn, A Hotel is betting on, and based on the experiences of so many other Brooklyn neighborhoods, it looks like a smart roll of the dice.

Go to the hotel website for current rates. You can also compare prices at the many booking sites such as Hotels.com or Travelocity.

Mike Dunphy stayed as a guest at The Brooklyn, A Hotel and all opinions are his own. All photos by Mike Dunphy.