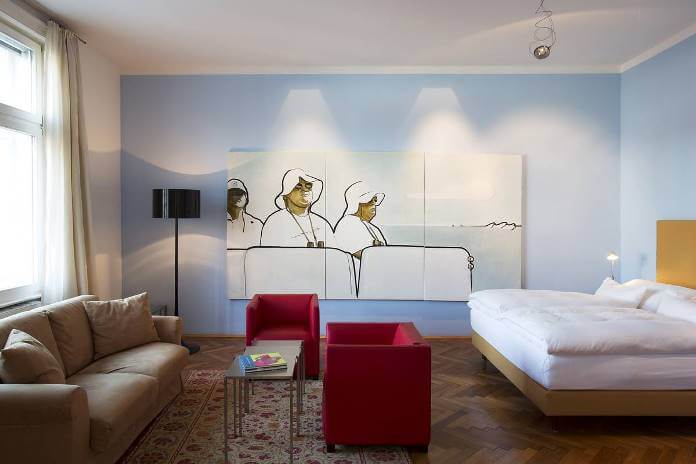 Admittedly, Spittelberg doesn’t sound like an attractive place in English. Thanks to its gooey, frothy connotation, the linguistic prejudice might stop you from exploring one of Vienna’s prettiest neighborhoods, located to the southwest of the Museum Quarter and outside the ring roads that encircle most tourists.

Here, in the narrow cobbled lanes, a few glimpses into quainter, less ostentatious and grand Vienna shows its face in softly romantic Biedermeier houses from the early 19th century. However, Spittelberg is anything but quiet, particularly in the evenings, when hip, young professionals (with a bit of cash to burn) arrive at its many stylish cafes, restaurants, and bars. 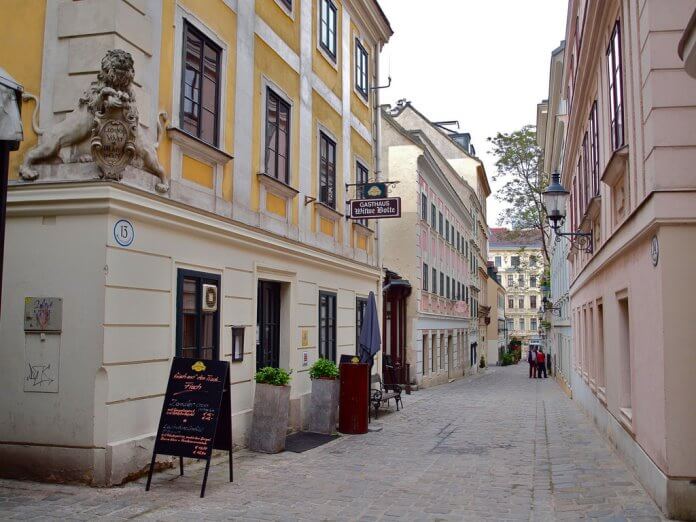 Although just over the northwest edge of the neighborhood, The 4-star Altstadt Hotel clearly draws heavily from the spirit, transforming a classic residential building into an artsy, boutique accommodation that impresses on many counts. While many hotels happily throw the word “art” around to expand marketing potential, fewer go the distance Altstadt owner, Otto Wiesenthal did. Supposedly, he debated whether to open a hotel or a art gallery, when seeking a way out of the computer business in the early ‘90s, and decided to combine the two.

As such, there is much to marvel on the walls at the Altstadt, with small- and large-scale canvases by up-and-coming artists such as Iris Kohlweiss, Peter Rühle, and Clemens Wolf, and masters like Andy Warhol and Annie Leibovitz. The result is that nearly everywhere rest your eye, there’s something to delight and challenge it.

Impressively, the Adtstadt goes much further, infusing this passion for art into the room design. In my room, the Bösendorfer Suite (starting at $380 per night/standard rooms at $275), the ceiling light was stuck full like a pin cushion, with notes scribbled by guests attached to the ends. In the corner of the shockingly large living area, a grand piano stood ready for play, while bright colors popped from the pillows of the surrounding sofas. In the bathroom, black-and-white checked floor made a soak in the large corner tub feel all the more hip, especially when combined with the rarely found Malin + Goetz shampoo and soap. Happily, the art never goes overboard and a few original details, like the original herringbone floor provide a counterweight.

The management also brought in locals artists to design entire rooms according to theme. Turkish fashion designer Atıl Kutoğlu spun one room into a boutique Ottoman theme, with a wall of ceramic tiles above the bed and bright oriental-esque patterns in the bed coverings, arm chairs, and wallpaper. Other “reloaded” rooms adopt themes of boudoir (think red satin and candelabras), “the space in between,” with Wittmann sofa and wallpaper pulled from an artist’s sketchbook, and film. Inspired by Hitchcock’s Rear Window, this room makes the bed the centerpiece, with both a direct view out the window, for innocent peeping, or to the pull-down screen to project films on to.

The fact that the building was built for apartments, several of which still remain in private hands, adds another benefit. The layout and furnishing of the rooms are more natural and attuned to needs of daily life rather than a short-term getaway time, making you feel more at home than most other hotels.

In the Altstadt Hotel

Sadly, renovations during my stay made it impossible to comment on the lounge and bar, which were temporarily relocated to the ground floor. But as long as the breakfast moves into the new space, I’m happy. It’s classic buffet, but the best they come, with poached eggs to order, plenty to keep you going until dinner.

In the breakfast lounge of Altstadt Hotel

If there’s a reason I’m always a sucker for hotels that show a genuine passion for art, it’s that it tends to push the experience beyond the function of hospitality to the spirit. For me, hospitality is not about about ticking amenities off a list, but offering sanctuary for the bedraggled mind. Few things can do this more effectively than art when applied with care. For a model, look to the Altstadt.

Go to the hotel website to check rates and make your reservation. You can also compare rates and book through a site like Hotelopia or Travelocity.

Mike Dunphy stayed as a guest of the Altstadt Hotel

Lead and lounge photos by the Altstadt Hotel