One of the world’s oldest categories of lodging is hostels built to serve people who travel long distances for the purposes of religious pilgrimage to holy sites. As a land holy to three major religions — Judaism, Christianity and Islam — Israel welcomes  more than its share of pilgrims every year. For Christian pilgrims, the Galilee — home to Nazareth, and where Jesus lived and preached for his entire ministry — is a supremely important destination. And now, with the recent opening of The Magdala Hotel, they may stay exactly where Jesus trod — and enjoy a heretofore unknown level of comfort at the same time.

This stunning hotel is unique not only because it is redefining standards of luxury for guests on pilgrimage, but also because of its location: it is as close to the waters of the Sea of Galilee as any building is permitted to be, and is erected right on the foundations of the 1st-century port city Magdala– a name familiar to Christians by virtue of its connection to Mary Magdalena, Jesus’ earliest and most devoted female follower, who was believed to be with him even at his crucifixion, In fact, the hotel’s construction was delayed by continuing archaeological excavation — and the hotel’s lobby is immediately adjacent to the remains of ancient Magdala’s dwellings and public places, which are clearly visible through the lobby’s floor-to-ceiling plate glass windows. 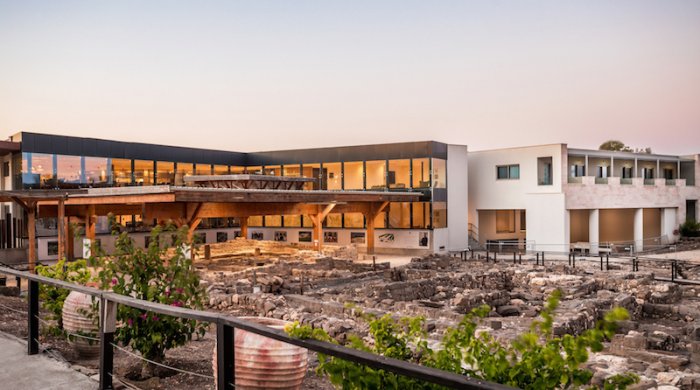 Among the Magdala ruins are the remnants of the millennia-old synagogue, where Jesus himself may have prayed and preached. Here was discovered an artifact of extreme significance to Jews as well: an impressively engraved and decorated stone that served as a table on which parchment scrolls of the Torah were read — and on which appear revelatory representations of the temple in Jerusalem, as well as a depiction of the now famous Magdala rosetta (currently, the symbol of The Magdala Hotel). The hotel provides guided tours of the archaeological ruins, which extend to the ancient fishermen’s port on the lake where the miracle of Jesus walking on the water is believed to have taken place.

The hotel’s rooms and grounds overlook not only the archaeological site but also the Sea of Galilee, the majestic Golan Heights on the other side of the lake, and nearby Mt. Arbel, where Crusaders and Muslims fought pitched battles for sovereignty over the Holy Land. The hotel also arranges excursions to the Arbel cliff and caves.

On the grounds of the hotel itself is a beautiful church, Duc in Altum, named after a teaching of Jesus to local fishermen. The distinctive altar is in the shape of a boat, and the congregation faces the Sea of Galilee, which may be viewed through panoramic windows.

The cornerstone of the hotel edifice was blessed by Pope Benedict himself, since the The Magdala is owned by  the Vatican. This Galilee hostelry is a sister property of the Notre Dame Hotel in Jerusalem; but the former is infinitely more deluxe. In essence, it is a hybrid: a boutique hotel for Israelis and tourists who want to enjoy a weekend in the country’s North, and a hostel for pilgrims who are here on a spiritual journey.

For the vacationer, the hotel has the customary recreational facilities: a small but well-equipped fitness room, plus an outdoor swimming pool with kiddie pool. For those who prefer to swim in the lake, there are beach chairs on the shore and beach towels. Indeed, the relaxation begins from the moment of arrival, with a welcome drink of Lambrusco or wine at the bar. (The fun occasionally continues later, with wine tastings in the evening.)

Pilgrims, on the other hand, have a completely different agenda: they are usually up early, traveling around the region to visit historic sites on what may be termed the Gospel Trail, and returning exhausted at night. At least when they do fall into bed at night, they will land on comfortable mattresses, after showering or bathing with first-class amenities: large bottles of Dead Sea products by Ahava.

Tourists and pilgrims alike will enjoy the features that characterize most luxury establishments: complimentary high-speed WiFi in all guest rooms and public areas; large flat-screen TV’s with multi-lingual and international satellite channels; hair dryers; coffee and tea sets; minifridges; user-friendly climate control; and personal safes in the closets. All rooms also have balconies, but only the suites have bathtubs — and pampering terrycloth bathrobes.

Israeli hotels of this type are known for their lavish, complimentary breakfast buffets, and The Magdala is no exception. There are plenty of hot and cold options, including selections of many varieties of cheese and smoked fish, while two coffee machines dispense choices of fresh brews.

The Tarichaea Restaurant offers an equally tempting dinner buffet, with a carving station, multiple main courses, myriad salads, an array of first courses, and two decadent dessert tables: one loaded with familiar Western sweets and cakes, the other laden with Oriental delicacies (think, baklava and other pastries with nuts and honey). After all, this is the Galilee, and Arab cuisine is ubiquitous.

While The Magdala Hotel is designed to host pilgrimage groups — and for this reason, most rooms have two double beds, to accommodate tour participants sharing a room (with king-size beds reserved for the suites) — individual guests as well will be made to feel at home in this welcome addition to the eastern Galilee hospitality scene.

Published rates: Starting from $250 (including breakfast); suites from $590. Rates vary by season. Compare rates at Hotels.com or other online booking sites.