For a peaceful stay in an unusual setting, Shaker Village is something special.

Sure, we like to write about swanky hotels and resorts here, but in how many places can you sleep in rooms where early U.S. settlers stayed? With The Inn at Shaker Village, about 40 minutes west of Lexington, KY, you can stay in the place where the Shaker people once lived, surrounded by the kind of furniture they became famous for.

In this living open-air history museum, you can stroll their paths and eat some of the food they enjoyed, some of it grown right there on the property. Kids can interact with the animals and costumed staffers will show you how the old farm implements worked or demonstrate the hymns they sang in the original wooden church.

The Shakers were a strange bunch, separating the men and women into different buildings and forbidding them from having sexual relations. For obvious reasons, this sect didn’t last very long. At one point they had 3,500 members strung out in communities from Maine to Kentucky. This one (which they named Pleasant Hill) started in 1805 and grew to 500 members by 1820. They eventually had over 4,000 acres of farmland in the area. Alas, with no kids to replenish the numbers apart from those of new recruits, the idea wasn’t as well-designed as the things they created with their hands. By the end of the century, they had mostly died out.

They were bright, industrious, and creative in their own way though. Besides the clean-lined furniture associated with them, the Shakers are also credited with coming up with the clothespin, the flat broom, and the circular saw among other things. They treated the two sexes as equal and made use of concepts we’re rediscovering now, such as sustainable farming practices and task rotation to avoid repetitive stress injuries. 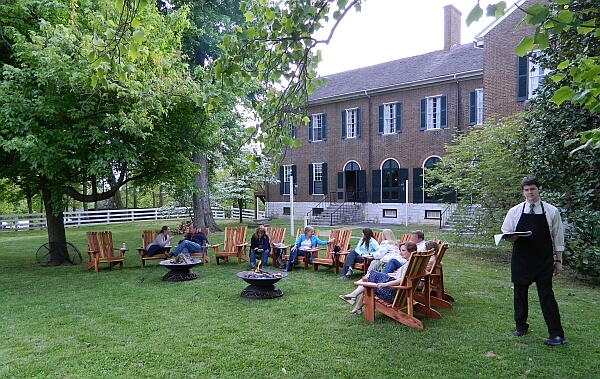 A stay at Kentucky’s Shaker Village doesn’t have to be akin to a school learning field trip though. There are 40 miles of walking and biking trails among the 3,000 acres now under the administration of the village. For an additional fee you can go on the Dixie Belle Riverboat nearby or sign the kids up for one of the many guided activities.

The restaurant here is a highlight, drawing a lot of people who live in the state or are passing through instead of spending the night. It mixes some contemporary dishes with plenty of ones dating back to the 1800s: tomato celery soup, corn sticks, fried chicken and corn pudding. Most of what hits the table comes from local farms, but don’t plan on dieting here—the photo below is the dessert array. Naturally you can get a good local bourbon or two.

Rooms are arranged in several buildings with different layouts. Some are set up like conventional studio rooms, others are two- or three-room suites that can work for families. When I first stayed here a decade ago, the village had made few concessions to the modern world and the quarters were a more comfortable version of the simple rooms from the 1800s—but with electricity. Now they’ve added Tempur-pedic mattresses and bowed to the pressure: there are TVs in most rooms (enclosed in a wood cabinet if you want to ignore it) and some buildings grudgingly come with Wi-Fi. All this was partly a bid to get people to stay longer rather than just coming for a night and taking off again.

Rates at Shaker Village start at $100 per night double and top out well shy of $200.

Despite the additions, and the nearby highway, this is still one of the most peaceful places I’ve ever stayed. Strolling along the stone buildings at night, no sounds but the gravel crunching under your feet, you can almost pretend you’ve stepped back to a simpler time a century and a half ago. Don’t worry though—you can procreate with your partner all you want now.

See more info and check availability at the Inn of Shaker Village website. For more on travel in the area, see the Lexington Tourism site.

Review and photos by editor Tim Leffel, who was hosted by Visit Lexington while doing research for an upcoming story in Perceptive Travel.