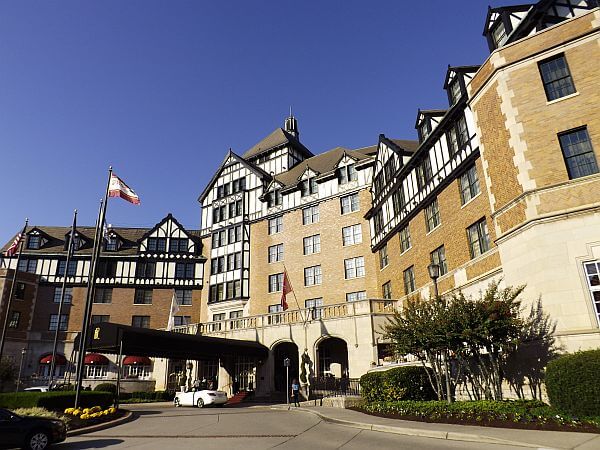 Like many of the great Fairmont hotels in Canada, Hotel Roanoke in Virginia was built as a place to stay for those who arrived on a train. It was a landmark next to the station and just across the tracks from downtown from 1882 to 1989. Tough times caused it to be closed for a while, but it opened as a renovated hotel in 1995 and got listed on the National Register of Historic Places the next year.

Hotel Roanoke was a Hilton Doubletree when this review first went up, now it’s a Curio Collection by Hilton. Either way, that means you get modern, well-equipped rooms with all the expected amenities. Just no more chocolate chip cookie when you check in. In the public areas though, the historic grandeur endures. This is an impressive hotel that exudes gravitas: no laminated walls meant to look like real wood or wallpaper meant to look like a painting. Here you get the real thing.

The Tudor style stone and brick building is striking from the outside and I was happy to see that most of the original details and layouts remain inside. The bellhops leaning against the wall didn’t give the best first impression when they asked, “Need any help with those?” right about when my wife and daughter had already struggled up the ramp with their suitcases and were headed into the lobby. Otherwise the welcome was a warm one.

“They don’t make them like this anymore” is probably a common refrain on the main floor. Thick paneling, original paintings, and chandeliers could give a stuffy impression, but there’s plenty of natural light inside and the faux clouds on the ceiling of the lounge area add some whimsy to the portraits of historic Virginia personalities.

The Regency restaurant is a staple in Roanoke best dining awards and the elegant atmosphere comes with the area’s best wine list. For simpler meals the Pine Pub serves an array of food that goes well with beer—and there’s a local ale on tap. Big-screen TVs are tuned to sporting events and news, but there’s an adjoining room with a pool table and no electronics.

Hallways leading to the Hilton Curio Collection rooms are lined with photos from the hotel’s past and it’s great fun to see the old cars and outfits, including a late-1950s glam shot by the pool. A nook off the lobby has copies of old menus and uniforms.

Electronic key cards lead to rooms that could be a Hilton anywhere apart from a few nods to the past like a cabinet-style vanity in the bath. All got several revamps over the years, so no creaky floors or old plumbing. Everything works like it should and all rooms come equipped with flat-screen TVs, one-cup coffee makers, clock radios with an MP3 input, and comfy beds.

There’s an enclosed walkway over the railroad tracks leading to downtown Roanoke and the surprisingly extensive Taubman Art Museum. A season swimming pool, hot tub, and fitness center are on site. Staffers can help arrange golf or winery visits. The Blue Ridge Parkway is nearby.

While the rooms in this corporate chain hotel won’t make you feel like you’ve stepped into the grand train era in Virginia, the public spaces and exterior give plenty of nods to past grandeur.

For more information, see the official Hotel Roanoke website. Book the hotel there or check rates at Hotels.com or Expedia.

Editor Tim Leffel won a Gold Best Travel Writing award from the North American Travel Journalists Association earlier this year for his Cheapest Destinations Blog and the prize was vouchers for three free nights at any Doubletree hotel. He cashed one in to stay at Hotel Roanoke in Virginia.