Imagine that it’s the 1930s, and you’re a daughter of a high-society family, sent from your east coast home to a finishing school in the Arizona desert.

Your day might include time in the wood-paneled library and horseback riding in the hills around the property. If you didn’t already own a horse, you’d need to buy one when you arrived in this remote outpost near the fledgling city of Tucson.

Hacienda del Sol was once a private school for girls.

Built by the Murphey family in 1929, the property that’s now Hacienda del Sol Guest Ranch Resort was originally constructed as a private girls’ school. Renovated and expanded, Hacienda del Sol still retains its historic feel, where some of the guest rooms were once student dormitories and vintage photos line the hallways, though the hotel now sits in a posh residential community on Tucson’s north side.

The lobby where guests check in is located in one of the property’s original buildings, where hands-on owner Helen Murphey, who constructed the property with her husband John, reportedly helped carve the wooden ceiling beams herself.

The school operated until the 1940s, when the property was converted to a hotel and guest ranch. During this era, while the city’s movie company, Old Tucson Studios, filmed westerns in the area, many of the studio’s stars stayed at the Hacienda, from Katharine Hepburn and Spencer Tracy, to John Wayne.

By the 1980s, however, the guest ranch had changed ownership several times and fallen on hard times. A decade later, the current partners took over the property and set about rebuilding and restoring it.

The guest rooms at Hacienda del Sol — now expanded to 59 rooms and suites — vary in size and type, depending on when they were constructed, although the sturdy wood and iron furnishings, handmade in Argentina or Mexico, are similar throughout the property. Room amenities include flat-screen TVs, complimentary Wi-Fi, mini-fridges, and coffee- and tea-making supplies.

The smallest rooms with petite bathrooms are the historic units in the property’s original building, which were once dormitories for the school’s students.

A series of low slung stucco buildings are named for the film stars who once stayed here. The Lana Turner suite, for example, resembles a little house with two bedrooms and bathrooms.

The property’s newest rooms are Catalina suites, constructed about four years ago, which are 500-square-foot studios with balconies or patios, sitting areas, and large bathrooms with colorful tile work.

Guest bath in the Catalina casitas at Hacienda del Sol

The property has two swimming pools. The smaller Sunset pool is original to the property. West-facing, it offers views of the evening sunsets. The slightly larger Catalina pool overlooks the golf course at the neighboring Westin resort and the nearby hills. Neither pool is set up for lap swimming, although both are lovely spots to lounge.

While the Hacienda doesn’t have a full-service spa, you can book massages and other treatments in one of three small treatment rooms or in your own guest unit.

At the hotel’s stables, horseback riders can book trail rides through the surrounding hills, where you might spot desert wildlife. 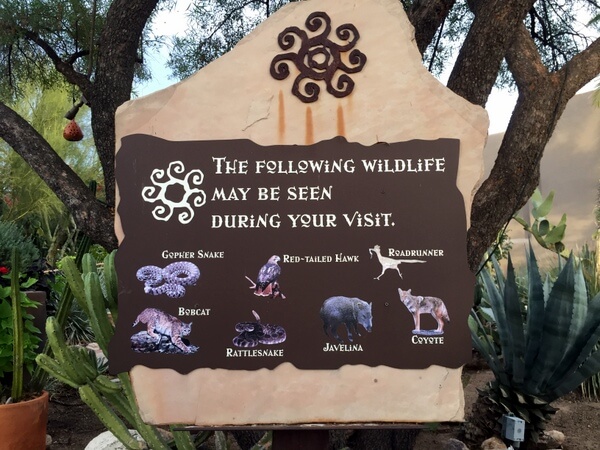 You may spot local wildlife at Hacienda del Sol.

Scallops at The Grill, the property’s more formal restaurant

In the more formal dining room, The Grill, a wall of windows faces west, overlooking the surrounding hills, an especially scenic spot as the sun is setting. Menu specialties include seafood, like big meaty scallops served over risotto, and steaks.

Did the students at this historic property once play shuffleboard?

Double room rates at Hacienda del Sol Guest Ranch Resort, which include Wi-Fi and parking, start at about $175 per night for the smaller historic rooms and $320 for the larger suites. Rates are typically highest in February and March and lowest during Tucson’s hot summer months, when you can frequently find significant discounts. Regardless of the time of year, you can check rates at Expedia for better rates.

But these days, at any time of year, you don’t need to bring your own horse.