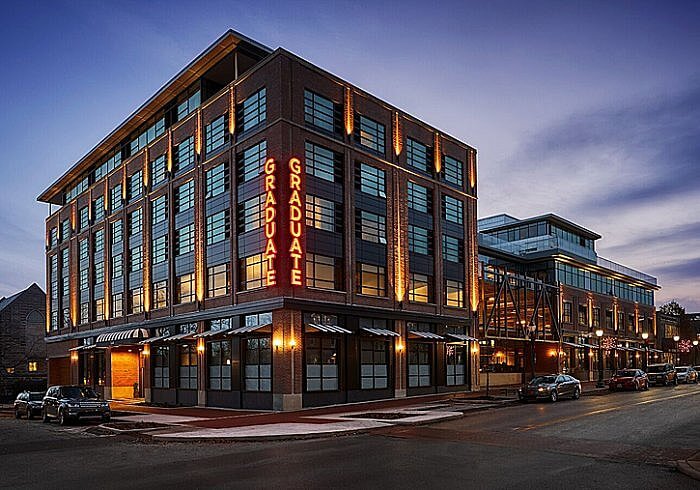 Graduate Hotels goes out of its way to contextualize its properties. My visit to The Graduate Hotel Bloomington, 210 East Kirkwood Avenue, Bloomington, Indiana, was my first look at the chain founded in 2014 — and I knew exactly where I was when I stepped onto the tile floor at the entrance. “Welcome to Indiana basketball” was spelled out in white on the dark gray background.

Think: Easter eggs. That’s what hidden surprises are called in the design and media businesses: they’re intentional inside jokes or cryptic allusions. In the Graduate Hotel Bloomington, you look at a directional sign, for example, and then look again. Indiana, and especially Indiana University, are everywhere. The kitschy-cool references are sly, and not explained. Fans of Hoosier rocker John Mellencamp know who “Jack and Diane” are, but the casual tourist will have no idea why the fourth floor rooftop patio bears those names.

My guest room had a banner on the wall for the ’81 Cutters — if you’ve seen “Breaking Away“, you know that Cutters is the nickname for the team of not-IU-student-locals who enter the “Little 500” race each year (that’s a bicycle race at Indiana University taking place about the same time as that “Greatest Spectacle in Racing” in the state capital).

Also in my room? A reproduction of a magazine cover featuring Jane Pauley, an IU grad. And a framed, illustrated music sheet for “Stardust”, penned by Bloomington native Hoagy Carmichael. And a print showing the back of a Tibetan Buddhist monk walking toward the iconic Sample Gates framing the entrance to Indiana University (the Dalai Lama’s brother taught at IU for decades.) The visitor has to deduce the connections — no explanations are provided. 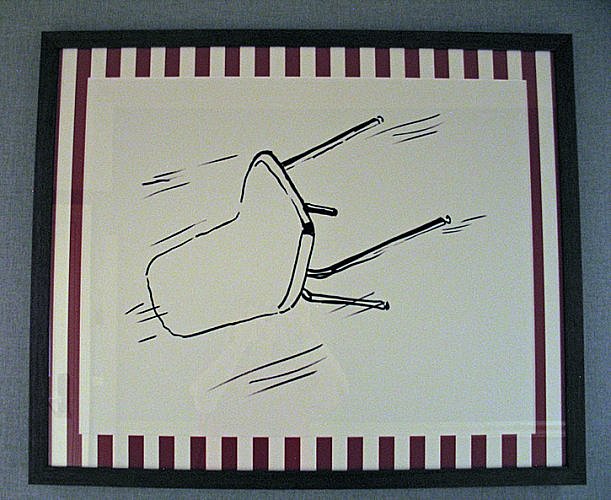 In the corridors, the colorful carpet has representations of a basketball in a hoop, cardinals (the Indiana state bird) and peonies (the Indiana state flower). Lining the walls? Prints of various aspects of a chair in flight — the same kind of fiberglass and metal chair hurled across the basketball court by Bobby Knight, legendary IU basketball coach, at a game against Purdue University in 1985.

Nope. Nothing in the 150-room Graduate Hotel is cookie cutter — what other hotel would have a chandelier made up of those three-dimensional flying chairs? Or one of “basketball” lights in string hoops? The floors of the elevators are striped in IU’s colors of cream and crimson. The walls of my bathroom were papered with bicycle riders. 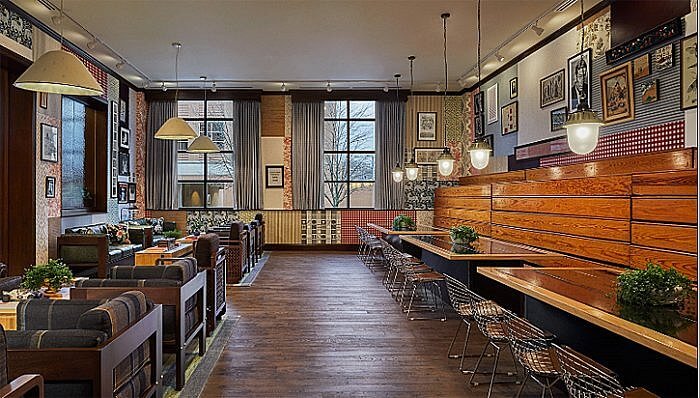 The lounge off the main floor lobby is lined on one side by folded-flat wooden bleachers. (I was at first confused when the desk clerk told me that the entrance to the parking garage was “behind the bleachers”. I got back in my car and circled the block looking for a playing field before I realized he was referring to those bleachers on the interior wall.)

The corner café on the first floor, Poindexter Coffee, serves all-day breakfast (and more) from 6:30 a.m. to 9:30 p.m. Lining the walls are shelves full of Mid-Century Modern cookie jars — a reference to Grannie’s Cookie Jar & Ice Cream Parlor in Metamora, Indiana, which holds the Guinness Book of World Records for having the most cookie jars. Poindexter has about 200 (Grannie’s has 2,000+). 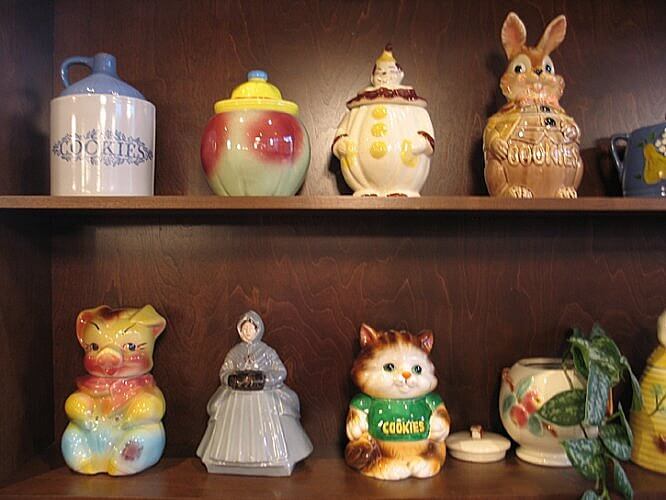 In a magazine interview, the chief creative officer of Graduate Hotels, Andrew Alford, described his decorating philosophy as storytelling. “The culmination of layers makes you know that you’re someplace special,” he said.

You can make a reservation at Bloomington’s Graduate Hotel online or via any of the usual hotel booking sites like Expedia or Hotels.com. Rooms start about $110.

(Photos courtesy of the hotel and by Susan McKee, who was a guest of the Graduate Hotel Bloomington)