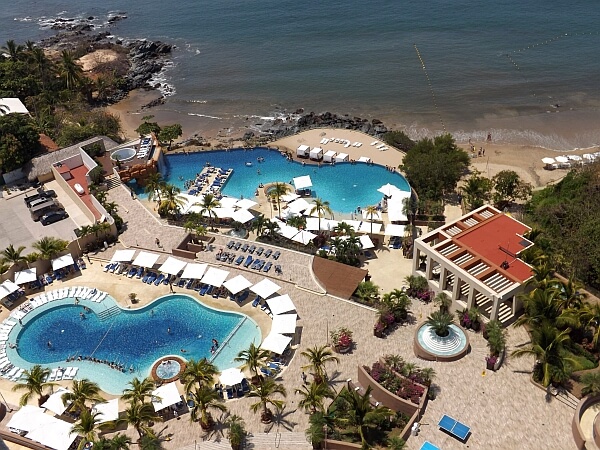 It can be perilous to choose an all-inclusive resort in Ixtapa, Mexico just based on price. You’re very likely to get what you pay for in an underwhelming small property. Azul Ixtapa Grand follows the typical playbook as expected (wrist band, towel cards, and a fight for pool lounge chairs each morning), but this is a large facility that is run well and has excellent rooms.

Often when you see the word “grand” in a hotel name it can mean quite the opposite. It may indicate delusions of grandeur based on some lofty position half a century ago, 20 years before the maintenance budget got permanently cut. The Azul Grand Resort in Ixtapa really deserves the designation though. We’re talking about 323 oversized rooms, three swimming pools, five whirlpools, four bars, four restaurants, a snack bar, and a big game room with pool tables and ping-pong.

There’s a clear pecking order for resorts in the Mexican beach resort town of Ixtapa, with the old and small resorts clustered in the central commercial district at the bottom, the Club Med and Capella Ixtapa further out at the top. At one point there was a Melia all-inclusive here that is now the Azul Ixtapa, connected to this newer Grand tower by a waterside footbridge and a walkway next to the road. In between is a big convention center, which can sometimes fill most of both hotels with guests. You’re free to move from the Grand to the regular Azul to use their better beach and for a restaurant change of pace, as we did one night at their sit-down Mediterranean one. 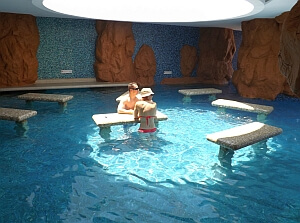 If this place is full the pools can get really over-crowded. Plus the expensive Wi-Fi that was slower than dial-up (in a brand new building?) and a charge to use the mini-golf course, makes it clear that it should really be called “most inclusive” instead. Overall though the food is restaurant quality and while the liquor choices aren’t as top-tier as they are at Velas properties or many others in Mexico, you can get the usual brand staples like Bacardi and Jim Beam and there’s Negra Modela on tap—always a nice touch.

Besides the buffet restaurant with swimsuit-friendly chairs and the poolside snack bar, there are three a la carte restaurants that offer a good variety. There’s an upscale Mexican one, a rustic Italian one, and an Asian fusion place that is primarily Japanese.

The swimming pool facilities here are quite impressive, with a waterfall in the middle of one and a swim-up bar in a grotto behind that where only adults are allowed. There’s also a quieter adult-only swimming pool off to the side away from the bars and snack bar. In the evening, the huge game room and lounge is an excellent place to let the kids play foosball while the adults sip cocktails, munch nuts, and watch sports on the big-screen TVs in the open lounge. This and several restaurants offer both indoor and outdoor seating, so you can adjust according to the weather.

The rooms here are a huge step up from anything in Ixtapa except the luxury hotel Capella. The standards are a generous 678 square feet, which is about double what a normal hotel room is. The Master Suites are double that, with a living room area and another TV, then the two Presidential Suites double it again. Besides the space though, all rooms have a terrace or balcony with a view, all have a Jacuzzi tub, and all come with robes and slippers. There’s a fridge that gets stocked with a few beers and sodas, an electronic safe, and a nice bathroom with good toiletries and a rain shower. There are a few English channels on the flat-screen TVs, but an extra charge for slow internet—per device. Don’t expect to get work done on your vacation or send Facebook photos of the wonderful time you’re having.

Azul Grand is about 15 miles from the airport and at the tail end of town, but it’s walking distance to a fenced-off area where crocodiles and big turtles hang out, as well as the ferry dock to head over to Isla Ixtapa and go snorkeling. Rates start at a shade over $100 a person for a standard outside of high season, which is a screaming bargain, so you may want to spring for an upgrade. To see rates and make a booking, go direct to the Azul Grand website or check rates at Priceline.