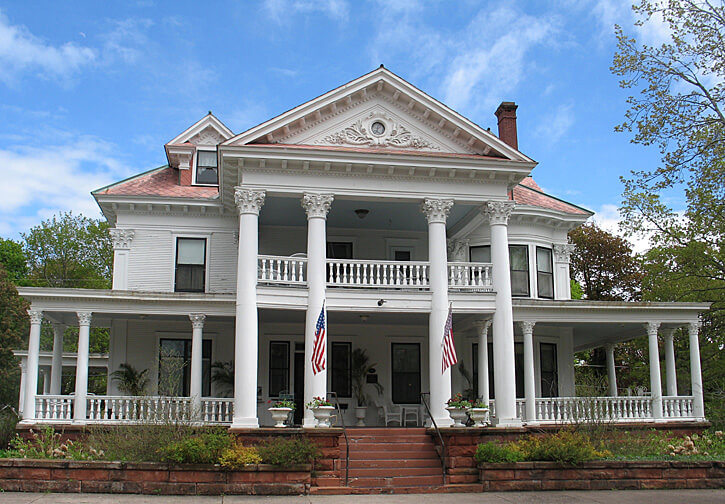 A Neoclassical mansion tucked away in Laurium — a small town of otherwise modest houses on the Keweenaw Peninsula of Michigan’s Upper Peninsula — is proof that mineral wealth generated by mining in the Edwardian era fueled a building boom. Mining company executives lived large at the turn of the last century, when the population of the flourishing region approached 100,000.

Probably the grandest house in one of the mining towns is this imposing manse, built in 1906 by Thomas H. Hoatson Jr. — owner of the Calumet & Arizona Mining Company, which had operations both in the UP and in Bisbee, Arizona.

That’s where I stayed: the house is now the Laurium Manor Inn, 320 Tamarack Street, Laurium, Michigan. It’s a 2-1/2 story wood-frame structure with a red sandstone foundation. Inside? The original 45 rooms cover 13,000 square feet on four floors (including the basement).

Bedrooms on the second and third floors have been altered to allow for that modern necessity — private bathrooms. Mine, on the second, was labeled the Tamarack Room (pictured, below), but ‘most everybody still called it Grace’s Room, because it served as the nursery for the youngest of the five Hoatson children, Grace.

The painted canvas mural above the picture rail is a whimsical garden scene featuring birds and butterflies.

Other special features in the house: stained glass windows (shown below) on the landing of the hand-carved oak triple staircase, iridescent tile fireplace surrounds, and, in the dining room, gilded and embossed elephant leather wall coverings.

It’s amazing that so much of the original house remained intact over the years. Needless to say, the economy of the area took a big hit when the mines closed in the mid-19th century. Antique dealers would buy old homes just to strip them of furniture and architectural details. The current owners, Julie and Dave Sprenger, bought the somewhat vandalized and vacant property in 1989. They are still working on restoring it to what it might have looked like in 1908 when the Hoatsons moved in.

Laurium is located in the center of “Copper Country”, the first major copper mining region in the United States. It was founded as a company town serving the Laurium copper mine (as were most of the towns in the region). Population in 1900 was 5643; today: less than 2000.

The Laurium Manor Inn, as a designated Heritage Site, is part of the Keweenaw National Historical Park. It was one of the original Cooperating Sites of the park when the program was created in 1993. The park had been established a year earlier to interpret the rich history of copper mining on the Keweenaw Peninsula of Michigan — the only place in the world at that time where commercially abundant quantities of elemental copper occurred. It claims the oldest metal mining heritage in the western hemisphere — one which dates back 7,000 years.

To build a house with a 1300-square-foot ballroom plus a billiard room on the third floor, you had to spend a serious chunk of change. It’s estimated that the mansion, designed by Charles W. Maass and his brother, Frederick A. Maass, cost $50,000 in 1906, and $35,000 worth of furnishings were added in 1908 — at a time when copper miners were making 25 cents an hour.

Now overnight guests get to lounge in the library, gape at the silver leaf ceiling in the music parlor (at right) and have breakfast in the dining room. The main dish changes daily (during my stay: lemon cream pancakes with blueberry sauce).

It’s easy to make a reservation on the inn’s website or through one of the hotel booking sites.

Laurium is named for Lavrion, Attica, Greece, a mining town since prehistoric times best known for its silver, but copper and lead also were produced.

(Photos by Susan McKee, who visited the Keweenaw Peninsula as a guest of the U.P. Travel & Recreation Association)