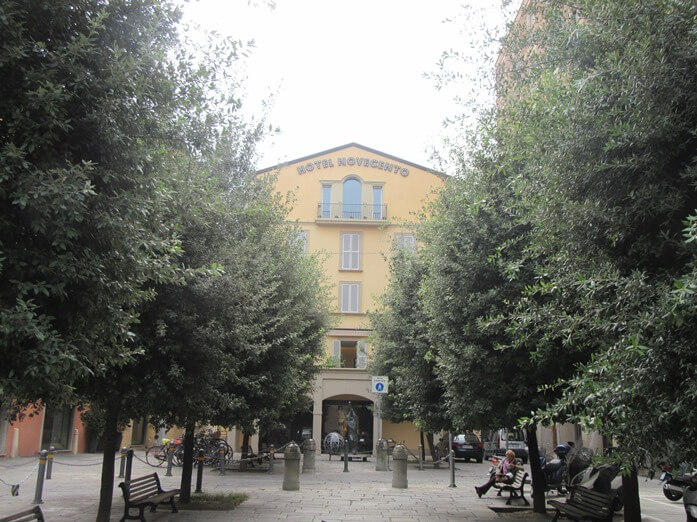 In the hotel business, there’s money in art. Adopting the moniker of an “art hotel” instantly adds luster, ups status, and raises rates. Parity, on the other hand, is harder to find, as what defines an “art” hotel remains foggy at best. For some, it means investing in a collection of original art to put on display, while others integrate it into the overall design, from the color scheme, fabrics, and flora to room layout, bath product, and services.

The four-star Hotel Novecento in Bologna belongs to a group of “art hotels” and claims to be “under the influence of the Viennese Secession style.” “Whoever said that new hotels are all alike has never seen a design hotel,” it states, “moreover they have never stayed at the Hotel Novecento.”

In this case, the best way to understand “under the influence” is like the “based on a true story” tag on films. Elements of authenticity are adopted, but the rest is made up. Unfortunately, the Novecento pays little more than lip service to the art concept, with a few Chihuly-esque blown glass sculptures, a vase, a cascading wall fountain decorating the entrance way and reception, and original art work on the walls of the black-heavy industrial chic breakfast room and lounge beyond. 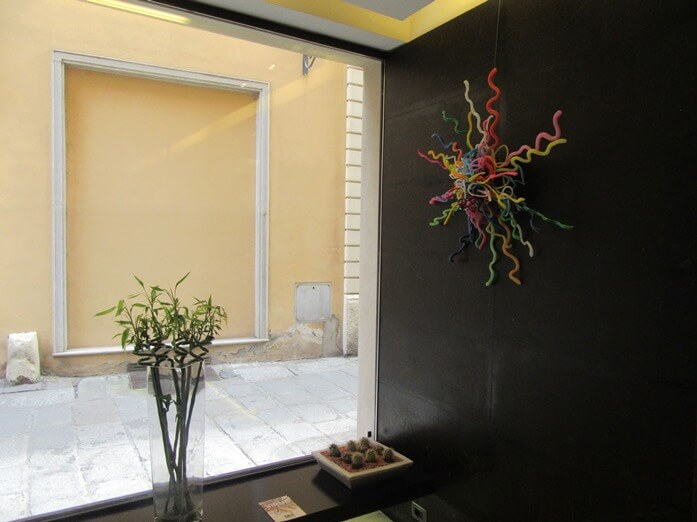 In the 25 rooms upstairs (starting at $185), the artistic touch is lighter, amounting to little more than bright red, yellow, and terracotta paint, slit wood screens, sunny photographic prints, and CW Bigelow product in the bathroom. The rest of the space is taken up by a couple stiff-backed arm chairs, mounted flat screen TV, minibar, tea and coffee maker—none of any remarkable quality—and of course, the desk. Here, the Novecento’s drawbacks come to a head. The uncomfortable stool makes work a challenge with the best of lower backs, but with a dodgy L5, it’s just about impossible. Add in a dubious Internet connection that varies in strength room to room, and it can get outright frustrating.

That’s not to say Novecento is a bad hotel. Indeed, it has many things going for it, starting with location, Literally just around the corner from Bologna’s main square, Piazza Maggiori, Novecento is in easy walking distance to just about every major attraction. Plus, it comes with its own charming square just out front, which looks great from the front facing rooms, a few of which have balconies. Furthermore, the service is prompt, polite, and friendly, especially from reception staff. So it easily satisfies the basics of accommodation and hospitality.

However, during the breakfast rush, the one server on duty was clearly overwhelmed by the deluge of orders, leaving many guests (this one included) unattended and continental items slow to restock. In fact, after 20 minutes waiting for eggs and tea, I simply gave up. The fault was not the server’s, but poor planning.

In the evenings, Novecento does make a modest effort at spurring some socializing among guests in the lounge, but this amounts to little more than bowls of ruffled potato chips, peanuts, party mix, green olives, and dried apricots with little world flags sticking out.  Considering the pedigree and fame of cuisine in Bologna, the collegiate layout of nibbles is almost laughable, and anything but “art.”

It’s this the lack of ambition, that ultimately makes the Novecento a modest disappointment, particularly in comparison to the other four-star “art” hotel in the neighborhood, Al Cappello Rosso (starting at $136 per night), which has rooms decorated by artists related the International Comics Festival Bilbolbul. So that’s more art for a cheaper price and equal location.

To be fair, It should be noted that the general feedback on the web is overwhelmingly positive for Novecento, with praises like “Better than Good!,” Lovely, comfortable hotel in a great location,” “Smart Boutique Hotel,” and “The Jewel of Bologna,” so perhaps I just arrived on an off day. But on that day, it must be said that the Novecento appeared the costume variety.

Go to the hotel website to check their rates and make your reservation. Or, choose to use a booking site such as Hotelopia or Travelocity instead.

Mike Dunphy stayed as a guest of the Hotel Novecento

All Photos by Mike Dunphy