When visiting Walt Disney World, just staying on Disney property may not be enough. Some families want to be within walking distance or a quick monorail hop of their favorite park. For those who want to be walking distance from the Magic Kingdom, there’s no better place to stay than Disney’s Contemporary Resort.

Disney’s Contemporary Resort, one of original Walt Disney World hotels, is often thought of as “the hotel that the monorail goes through”. Despite the close proximity of the monorail, the resort isn’t overly loud, and is actually very comfortable. As someone who needs a good night sleep every night to function well, I was initially concerned about that, but was pleasantly surprised. Depending on your room location, you will hear the Magic Kingdom fireworks and the Water Pageant, but otherwise the rooms are pretty quiet.

Booking a room at the Contemporary can be a little confusing, because there are several room options. The hotel actually has three sections. The tower is the iconic A-frame building that includes most of the restaurants and shops, plus the monorail. The garden wing is a smaller section to the right of the tower as you’re looking at the water. There’s also the newer Bay Lake Tower, with has rooms in several sections, with varying views. (Some can see the Magic Kingdom fireworks at night.) You’ll find that rooms in the garden wing are cheaper, but if you have your heart set on staying in the main building, make sure that’s what you book. The most expensive rooms offer a Magic Kingdom view or look out at the water—worth it only if you plan on spending lots of time in the room.

Rooms, as you’d expect, are ultra-modern with sort of a “Jetsons” feel. Many rooms also offer a sleeper sofa, accommodating five in the room. There are lots of outlets, and free wireless internet access is now included. The service seems to be improving as well: my travel companions and I needed to get a lot of work done while we were attending a convention and the signal worked well in multiple locations.

The resort itself offers several popular dining options. The California Grill offers fabulous views from atop the tower and delicious food, so it’s a popular sport for watching the fireworks at night. The very contemporary Wave, pictured at the right, offers fresh, California-style American food. If you are traveling with small children, make sure you book breakfast or dinner at Chef Mickey’s, which is hosted by Mickey and friends.

There are also several quick service spots, including a lobby coffee bar and a convenience store. Next to Chef Mickey’s is what resembles a mall food court—except for the Disney-level prices.

Transportation around to the parks is offered via monorail, boat, or bus. You can literally get off the elevator from your room and hop onto the monorail to get to the signature park. If you’re not in a hurry it’s easiest to just walk to the Magic Kingdom. Expect for the whole walk to take about 10-15 minutes. You can take a monorail to Epcot, but you’ll need to take a shuttle bus to both Animal Kingdom and Hollywood Studios.

If you want a break from the theme parks, the resort also offers a large pool as well as the Sammy Duvall Watersports Center which offers parasailing and other fun water sports on the lake. It’s a nice way to take the afternoon off. You can also catch a free shuttle to the freshly updated and expanded Disney Springs for a wide range of dining, drinking, and shopping options. There are several sizable stores on site though stocked with souvenirs, which now include Marvel and Star Wars items.

If your room faces the lake, you’ll get a nostalgic Water Pageant show at night: a quite cheesy and patriotic sound and light show like you see below, the objects set up and then hauled away each evening by boat. 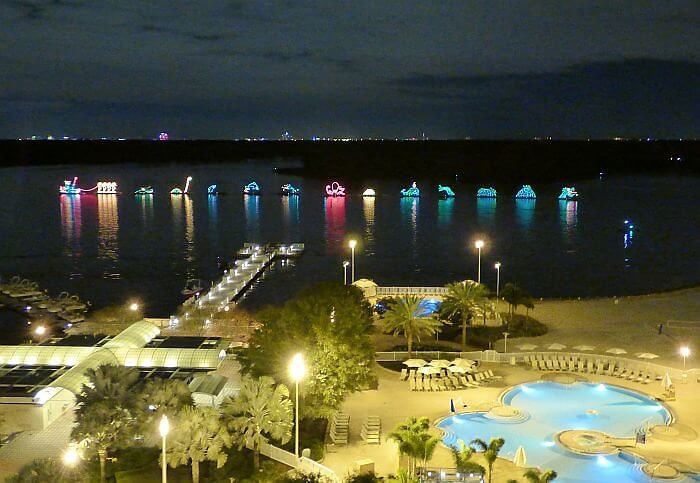 Although this isn’t really a luxury resort, it’s priced like one because, well, people are willing to pay it. Rates seldom drop below $350 even in the garden wing and most of the suites are more than $1,000 per night. You can find out more information by visiting the Contemporary Resort website. Check rates at  Expedia, Hotels.com, Priceline or any other online booking site.

Article by Jodi Grundig of Family Travel Magazine. Her stay at Disney’s Contemporary Resort was discounted due to attendance at the Disney Social Media Moms Conference. Update and photos by Tim Leffel, who was hosted at the hotel as a press attendee at a Florida tourism conference.

Jodi Grundig is a Boston-based family travel expert, social media and blog consultant, brand advocate, and freelance writer. Jodi has traveled extensively with her children and has served on the popular Disney Parks Moms Panel. Jodi specializes in travel, finance, and family products.