A member of the Historic Hotels of America, the Strater is one of those iconic Old West hotels where you literally feel as if you’ve stepped back in time to experience the romance of the Victorian era and the rails of the late 1800s. Located two blocks from the railroad depot and one hour from Mesa Verde National Park, the Strater Hotel makes its home in the rugged San Juan Mountains. 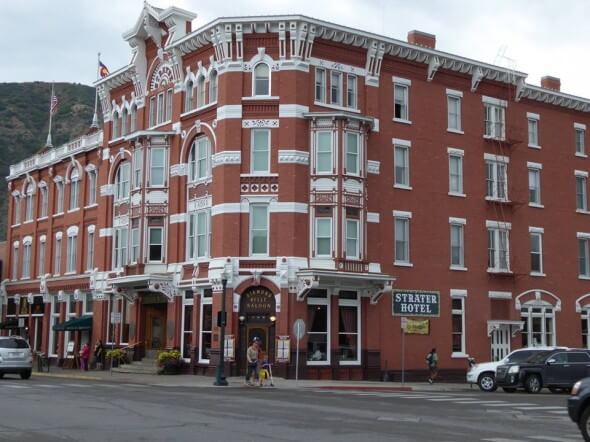 The Strater Hotel, a red-brick and limestone historic hotel in downtown Durango, Colorado.

The 93-room Strater Hotel features a prime location on Main Street of Durango, Colorado. Early morning and late afternoon, you can watch the Historic Durango & Silverton Narrow Gauge chug along the railroad tracks behind the hotel

When Durango was still a mining camp on the verge of big things, the Strater Hotel first opened in 1887, a dream of Cleveland pharmacist Henry Strater. Hand-carved sandstone cornices and sills, 376,000 native bricks, and a total investment of $70,000 brought this grand hotel to life. Originally, the Strater was a warm haven in winter for townfolks escaping the cold of the rugged southwestern landscape.

Today, Colorado’s four-story, red brick historic hotel features prominently in the landscape of downtown Durango. Step inside the lobby and the charm of the Victorian era is evident in the handcrafted woodwork, period wallpaper and antique furniture, including the largest collection of American Victorian walnut antiques, located throughout the hotel and in the guestrooms.

The reception desk, another awe-inspiring woodwok, past the an old-fashioned letterbox and the lobby, a living room of sorts, with sofas and chairs with the bright reds and oranges of the Victorian eras. 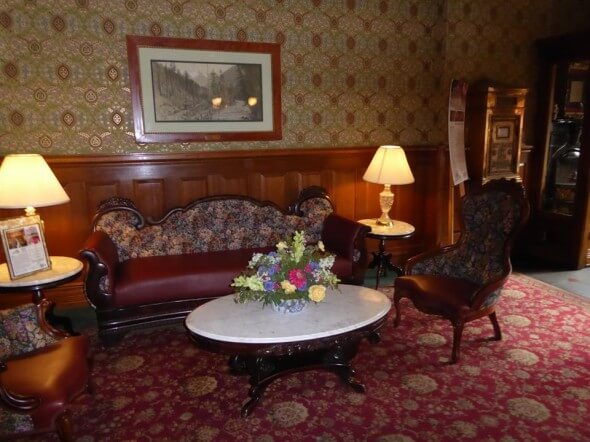 One of several “living room” like pods scattered throughout the Strater Hotel, Durango, Colorado

We actually arrived from a side door, dodging the summer rain storm. Unfortunately, our early lunchtime arrival meant our rooms weren’t ready, but we stepped out to downtown Durango, literally steps away to enjoy a quick bite, returning a couple of hours later. Check-in was hassle free, although there weren’t bellstaff at hand to assist us. As it’s an historic building, the elevators are also old, and for those who don’t like elevators, likely a bit intimidating.

Our room was on the second floor, and again as an old building, the halls are narrow with stairs leading down to our room.

Finding your room is a bit of a maze, but once inside your room, accommodations are another immersion into the Victorian era with the antique furniture and bright colors of this bygone era.

Surprisingly I did find the rooms larger than I expected (and bigger than the nearby historic General Palmer Hotel where I stayed a couple of years ago). Free WiFi and a desk tucked in the corner by the window created a perfect work environment. The bathroom was also surprisingly roomy.

Our room at Durango’s historic Strater Hotel was very spacious.

For those wanting to truly step back into history, Western novel writer Louis L’Amour and his wife Kathy often stayed at the Strater, discovering inspiration for his books. The hotel was sold out; otherwise I would have asked to tour rooms 222, where L’Amour stayed.

At checked in, we added an amazing $5 breakfast buffet in the dining room, which included a made to order (from the kitchen) featured omelet.

For a Wild West “romp,” the Diamond Belle Saloon is off the main lobby, with an entrance on Main Street. With costumed dance hall girls and bartenders, you’ll definitely feel like you’ve stepped into a spaghetti Western movie. (This is the bar that inspired Louis L’Amour, who always requeted a room above the saloon.) Pub-style lunch, happy hour and dinner can be ordered here.

The Diamond Belle Saloon, located off lobby of the Strater Hotel, Durango.

For fine dining, book at table at the on-site restaurant, the Mahogany Grille, winner of the Wine Spectator Award of Excellence in 201

Love, love, love the Strater Hotel in Durango, everything from the décor to staff to its location. I enjoy being immersed in the Old West Victorian era, and with the its prime location on Main Street, who could ask for a better hotel? I most certainly

Off season rates, mid-October to early May start at $100. Holidays and high season,  $175. Make a reservation with the Strater Hotel.

Compare rates at Expedia or Hotels.com.