Built by Buffalo Bill Cody and named after his youngest daughter, The Irma Hotel opened in 1902 in Cody, Wyoming. Approximately 52 miles from the East Entrance to Yellowstone National Park, the hotel was once frequented by the likes of Annie Oakley, Calamity Jane, and of course, Buffalo Bill himself.

The hotel building can be entered from several doors, but the entrance on Sheridan Avenue—(the main street of Cody) is the door that places you immediately in front of the check in desk. A copper spittoon (filled with pens) sits atop it, along with a good-sized brass bell, used to summon the hotel manager/owner no doubt—just in case he happens to be in the adjacent dining room. There’s no elevator but help can be arranged to carry up your luggage to the second floor, if needed. 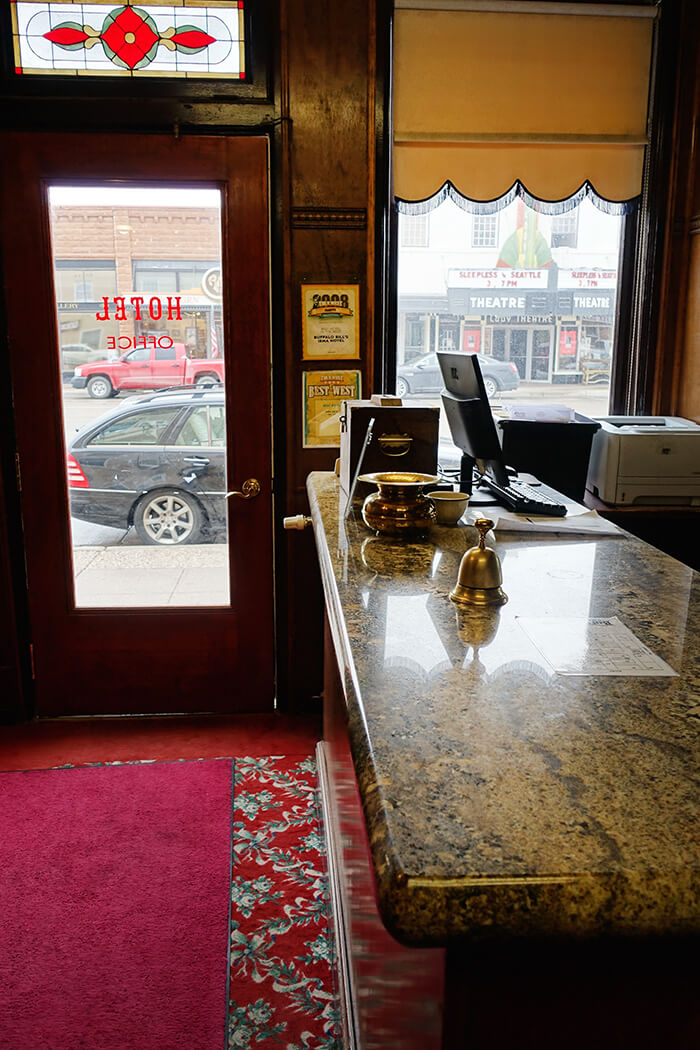 Rooms are spread out in three different sections; besides the historic renovated rooms, there are rooms in a northwest addition constructed in 1929, as well as in a southwest addition added in 1976-1977. Historic rooms are named for many of Cody’s illustrius citizens –and each of these rooms are decorated and furnished differently. If your purpose to stay here is to enjoy the historic ambience (versus a lower pricetag), definitely request a room in the historic section.

My room, the Irma suite, was a corner room in the original historic building, facing Sheridan Avenue. It was charming—with beautiful Victorian furnishings, and touches like a crystal decanter, dressing table, and a coffee maker (a real one). Expect some noise from the old-fashioned radiators (there are room air conditioners for hot weather). Free wi-fi is throughout–but there are not many plug ins for electronics yet.

The bathroom was large, with the new (but old-fashioned) toilet—the kind with a pull chain to flush. The black/white tile fit the period furnishings. There was a standard/ tub/shower and a single sink –but for all the floor space, there was not really any convenient place for setting down a makeup case or shaving kit.

The Irma Restaurant is worth a dinner (get their famous prime rib), but I think breakfast is an even better deal and delicious too. The morning special when I was there: $6.95 for a green chile skillet, served with eggs and a fresh tortilla. Coffee (a bottomless cup) was an amazing $1.50.

It’s relaxing and fun just to sit (and observe) in one of the old dark wood booths in this room that has been serving cowboys, ranchers, tourists and locals since the turn of the century. Walls are adorned with old paintings and prints, with stuffed trophy animal mounts like elk heads and bison heads watching over the entire room. You can also sit at the beautiful cherrywood back bar.

The bar has a history of its own; it was a gift to Buffalo Bill from Queen Victoria– in appreciation of the Wild West show he performed for her in 1887 in England. Apparently the two were friends; rumors hint that they were “very close friends”. Who knows? Apparently Buffalo Bill did have a way with the ladies.

The hotel’s Silver Saddle Saloon is also popular with locals; get there early for happy hour and a little slice of Cody life. In the summertime, guests can sit on the hotel’s porch and take in some real wild west action at the performance of the Cody Gunfighters; they put on a family-friendly show nightly just outside the Irma Hotel, Monday through Saturday (June through September).

There are 39 rooms in the hotel—with rates depending on the season. They can start as low as $100 for a standard, but generally range around $140 or higher for one of the historic rooms.

For more information, or to make reservations, check the website. You can also make your reservations through  Expedia.

Review and photos by Donna Tabbert Long who was a guest of the Irma Hotel. As always, all opinions are her own.

An avid traveler and food lover, Donna Tabbert Long is an award-winning freelance writer. She's the first to admit her siren songs on the road often lead her to sugar, Champagne, and bookstores. Finding bakeries, patisseries, and chocolate shops, along with a few cool spots for sipping some bubbles--and she knows she's arrived. Part of the pleasure during such searches includes discovering the best places to rest her weary body. Her articles have been featured in National Geographic Traveler magazine, the Minneapolis Star Tribune, Dallas Morning News and AAA Home & Away Magazine. When she's not traveling, she's at home in Minneapolis. Catch up with her on Twitter @tabbertlong.