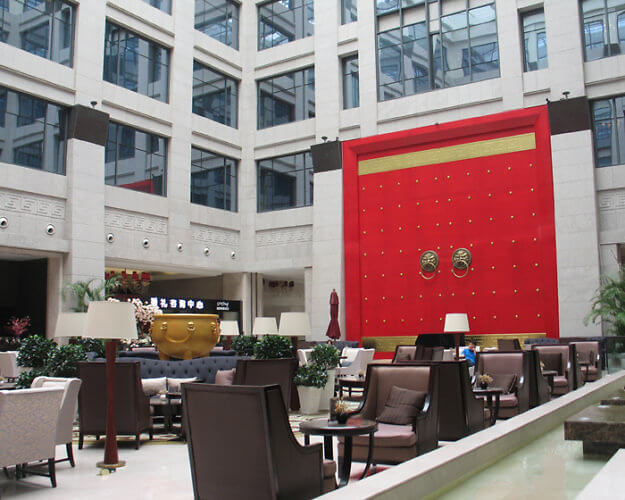 The Wyndham Grand Xi’an South, 208 Ci En East Road Qu Jiang New District, Xian, China, has figured out how to combine Western amenities with a splash of local flavor. The result? A five-star hotel in the center of the Qu Jiang New District in this city of almost 9 million in central China.

Of course most recent tourists been drawn to Xi’an, historic capital city of Shaanxi Province, by the prospect of seeing the famed terracotta warriors. A mighty faux army assembled for the tomb of Qin Shi Huang, the first Emperor of China, the life-size figures of soldiers, horses, chariots and more were discovered in 1974, and, since then, have been excavated and reassembled to provide a breathtaking glimpse of China in the late third century BCE.

Full size replica warriors are on duty in the expansive atrium lobby of the hotel, which also includes a massive replica of the red doors with lion-head knockers at the entrance to the Forbidden City in Beijing.

Of course there’s free WiFi, but the defining touch? The Handy Phone. I’ve not encountered one in any other hotel anywhere in the world. Those who’ve been to China know that many websites are blocked by the government, including Twitter, Facebook, The New York Times, and everything Google. One workaround (popular with those who travel a lot) is buying a VPN, but that’s not necessary if you’re staying at the Wyndham Grand Xi’an South. Guests get a Handy Phone — a cell phone that does have access to all those otherwise blocked sites.

In addition to direct links to hotel services and location-specific content, it also offers the usual smartphone features of GPS, international and local calling — all at no cost to hotel guest. The phone “works” from check-in to check-out, and you can carry it with you outside the hotel. Somewhat surprisingly, this amenity is not noted on the hotel’s website.

The Wyndhan Grand Xi’an South is a large hotel — 565 rooms. (The Presidential Suite has three bedrooms, in case you’re interested.) I’ve long been a fan of the Wyndham signature bedding, and the “rain forest” shower head is a bonus in the bathroom. There’s a spa, indoor pool, business center, full-service hair salon, and several meeting rooms of various sizes. The hotel is next door to the Great Tang All Day Mall.

A buffet breakfast is served in the ground floor Tang Café, which is open from 6:30 a.m. to midnight. Other onside dining options are Yan Ming Xuan (serving Cantonese and local cuisine for lunch and dinner), and The Lounge, located in the 98-foot, sky-lit atrium.

Rates start about $120. Rooms can be booked on the hotel’s website or any of the usual booking sites such as  Travelocity.

(Photos courtesy of the Wyndham Grand Xi’an Hotel and Susan McKee, who stayed there as a guest of the Shaanxi Provincial Tourism Development Commission)