The last 3 times (in the last year) I’ve connected through Seattle en route to visit my daughter in Oregon, I’ve been stranded in Seattle. Combine the crazy and unpredictable northwest fog and rain and mechanical issues, and I’m stranded. All three times, my evening flights were canceled, and I had two choices. Sleep in the airport, or find a nearby airport hotel. Read on for a snapshot of the Doubletree by Hilton Seattle Airport.

Perhaps a traveler’s worst nightmare is a flight cancellation resulting in stranded in an airport for an indeterminate amount of time. That’s happened to me all three times when flying on Alaska Airlines from Denver to Seattle en route to my daughter’s Medford, Oregon, home. Each time, the cancellation was a late night flight with the rebooking not until the next morning. The latest misadventure brought me to an overnight stay at the Doubletree by Hilton Seattle Airport. 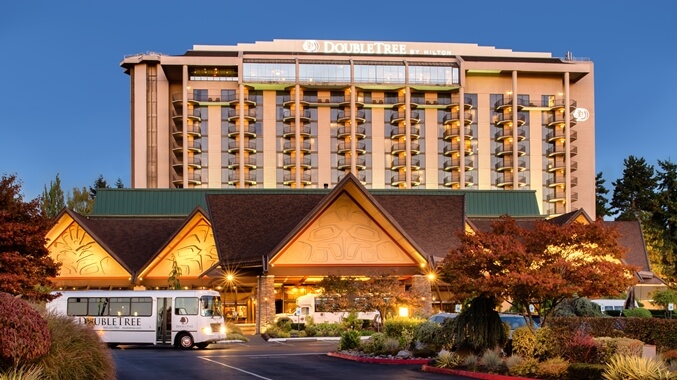 I’m too seasoned of a traveler (translate = old) to sprawl out on the chairs or floor of the airport. Earlier this month the airline did offer me a hotel voucher, which brought me to this Seattle airport hotel.

You know the feeling…that sense of dread when you finally make it through the customer service line to determine the fate of your rescheduled flight. Mine was rescheduled for 8:30 am the next morning. My airport misadventure took me to overnight at the DoubleTree by Hilton Hotel Seattle Airport, located less than one mile from Seattle-Tacoma International Airport.

With my carry-on bag by my side, I navigated the airport past the baggage claim and out into the airport shuttles. As a seasoned traveler, you’d think I’d have this part down, but not this time. I glanced at my hotel voucher, noting the “DoubleTree,” picked up the service phone where the hotel receptionist informed me that the shuttle should actually be pulling up right then. I waved down the driver, who promptly pulled over, loaded my bags, and we were off into the rainy Seattle night.

Side Note: As I chatted with the driver Anthony on our exit out of the airport, we both came to the realization that I had boarded the wrong hotel shuttle – Embassy Suites by  Hilton Seattle-Tacoma International Airport, not the DoubleTree. Mea culpa!  Driver Anthony immediately reassured me that he would drop off his one passenger and then return me to the correct hotel. Big huge thank you to Anthony as not all shuttle drivers would have been so accommodating.

This is a huge sprawling 14-story DoubleTree hotel with  7 interconnected wings and a massive meetings and events property. The front hotel entrance opens to a cozy living room like area, directly in front. The next morning, while waiting for the airport shuttle, I did cozy up to the warm fireplace.

To the right is a restaurant (which was closed as my arrival was after 11pm). To the left was a double-desked reception area. I did have to wait a few minutes to check in. I handed my hotel voucher to the receptionist, who in return handed me a complimentary warm chocolate chip cookie!

As she checked me in, she mentioned that if I had any airline food vouchers (which I did) that she could exchange them for credit at their hotel restaurant. Unfortunately, the restaurants wouldn’t be open before my early am airport departure, so that didn’t work this time. She was quick to encourage me to stop at the lounge for snacks and/or an adult beverage before going to the room.

The receptionist handed me a hotel map, which was necessary as it literally took me more than 5 minutes to walk to my room. My accommodations were located on one of the farthest wings (apparently reserved for airport stranded travelers like me), passing the SeaPorts Lounge and the business center.

I had planned to return for a nightcap to the lounge, but I should’ve listened the receptionist and stop for a drink first. It really was a long walk, and I did get a bit disoriented trying to find the right wing.

My double queen accommodations were everything the DoubleTree brand delivers — a comfortable bed, flat-screen HDTV, and roomy work station/desk.

All the guest rooms in this Seattle hotel also include a balcony with views of surrounding suburbs, and I did take a peek out into the rainy night, just because I could. Other balcony views feature Bow Lake or the airport. Double-paned windows kept my room very quiet.

The bathroom was standard with a dualed vanity area separate from the shower and toilet.

And yes, WiFi is complimentary. I didn’t feel like trekking back to the lounge, so I powered up my iPad and logged onto the WiFi — super speedy and no problem connecting at all.

Amenities Galore at the Airport Hotel

On my jaunt to my room, I passed the year-round outdoor pool, but worth noting unheated November 1 – March 3. unheated in the winter months.  A 24-hour fitness center, a gift shop, computer station, concierge services, and a 24-hour business center are on site. Other amenities include a fully equipped 24-hour fitness center (which I didn’t have time to use), and a super fun virtual golf course with The Golf Club at DoubleTree (which I wish I could’ve tried). A gift shop, the computer stations by SeaPorts Lounge, and concierge services round out the amenities.

The free 24-hour airport shuttle return to the airport was efficient, and once loaded, it was less than 5-minute ride. A free shuttle is also offered to the nearby Southcenter Mall, and for those with enough to time to explore Seattle, it is just 20-minute drive from  Pike Place Market and the Space Needle.

Worth noting is that this airport hotel also offers close proximity to the Sound Transit Light Rail Station giving convenient access to downtown Seattle without a car.

Restaurant options are the Coffee Garden Restaurant (just off the front lobby). Lunch and dinner serving local Pacific Northwest ingredients available in SeaPorts Restaurant, and a sports bar setting at the SeaPorts Lounge.

If I had to get stranded in Seattle again, this go-round I’m happy I had the opportunity to stay at the Doubletree by Hilton Hotel Seattle Airport. The staff was extremely friendly and accommodating, and the room was a much needed down time away from the airport. If I traveled to Seattle again, I’d definitely consider staying at this Seattle airport hotel.

Room rates start at $109. Book directly through the hotel website or use a booking site like Hotels.com or Travelocity.