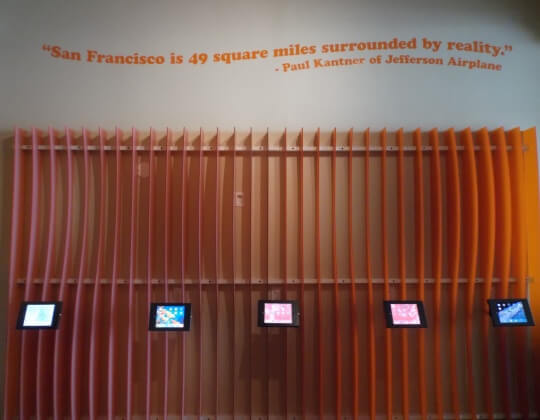 “San Francisco is 49 square miles surrounded by reality,” reads the bright orange words along the lobby wall of the Hotel Abri, a few blocks south of Union Square. The quote by Jefferson Airplane guitarist Paul Kantner applies equally to the hotel, which creates a boutique sanctuary at the juncture of business, tourist, and ghetto districts of downtown San Francisco. The blend is further emphasized beneath the quote, in vertical slats that undulate downward in somewhat trippy fashion before finally blooming into iPads.

The building, a few blocks from Union Square, is a bit of a San Francisco relic, built in 1906 as an apartment block soon after the earthquake. Later it became the Monticello Inn, which it stayed until closed in 2007, when full renovations began. After 11.4 million dollars, and nearly a year’s time, the hotel re-opened as the Abri.

As a protected historical structure, many aspects of the building remain true to the original, or near original. This is most visible in the layouts of the 91 guest rooms and 28 suites, which more or less follow the lines of apartments. For some guests, the lack of uniformity can be a turn off, along with the miss-matched moldings, sometimes dim lighting, and subtle hints of age in the air, but for anyone who appreciates character and moxie, it’s a boon.

At the fireplace in the lobby

The other major element of the Abri’s overall look comes from the GGLO design firm in Seattle, who did the interior. The most attractive and visible touches are in the lobby, which includes reclaimed wine tank redwood in the large recessed fireplace in the back gathering area. Just next to it, a “Nightly Rush Hour,” takes place each night with an energy drink made from fruit juices, herbs, and the occasional deer antler. Friday night adds vodka.

Of the rooms, corner suites (called oasis suites) are generally the biggest and best. The door to mine (starting at $220 per night), on the 6th floor, opens much like an apartment, with a living room to the right and bedroom to the left. Despite the slate gray carpet and sofa and brown desk, a gas fireplace in the corner, wine-red pillows, and wall art provides a bright, warm atmosphere, perfect for hosting a reunion of friends. When the fun is done, the bedroom has a perfect response in its ultra-comfortable Serta mattress dressed in Sahara Nights 250 thread count sheets.

The most fun at the Hotel Abri, however, can be experienced in the attached Puccini & Pinetti restaurant, which serves “Cali-Italian” cuisine. It does so with impressive gusto and significant charm especially visible at the chef’s table, where the team of cooks performs with mind-boggling efficiency and speed. Nothing is lost in the flavor, to be sure, and the Italian classics demonstrate plenty of verve, especially the linguini with Littleneck clams, pan-seared scallops with saffron and tomato risotto. Leave wine pairings to the waiters, who impress with their knowledge.

If you have one glass too many, or switch to grappa at an ill-advised time, it’s still hard to wake up in the Abri with anything less than with a warm feeling. It’s not the design, service, or comfort that make it so, but rather the fun of the Abri, which makes it all the more easy to forget the reality outside San Francisco and slip into something more comfortable.

Book direct at the hotel website or compare rates and make a reservation at Expedia or other hotel booking sites.

Mike Dunphy stayed as a guest of the Hotel Abri

All photos by Mike Dunphy