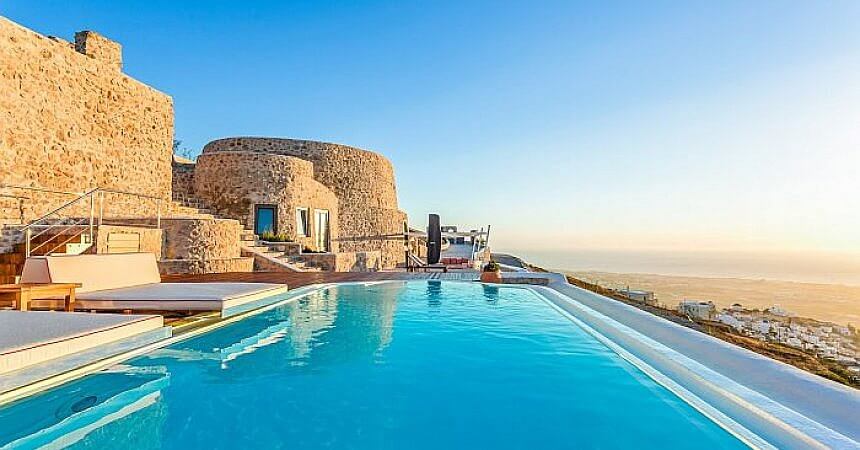 There are many parts of the world that struggle to fill their hotels, but the popular islands of Greece do not have that problem. If you haven’t made summer reservations yet for some of the most popular Greek islands, you may be out of luck already. There’s a limit to the amount of land available for building and restrictions in place on new construction.

In 2010, when the world financial crisis hit Greece worse than most, the country received 15 million visitors. This past year, they got 30.1 million. That means in less than a decade, the number of people vacationing in Greece has doubled. It’s not all just short-stay cruise ship visitors either: two-thirds of those people arriving on holiday came on an airplane.

So if you have your heart set on Greece, you’re not alone, but that doesn’t mean you can’t find ways to get around the problem. You can visit outside of summer, you can spend time on a less mobbed island, or you can rent your own Greek villa and get a view like this from your living room:

Greek Island Villas for Spreading Out

We love the service, the personality, and the social aspect of staying in a nice hotel. We’ve reviewed a few in the country from our visits, like Ikies Traditional Houses Hotel and Platanias Ariston. The latter was on Crete, which has plenty of room, but the first was on Santorini, which was limiting the number of visitors in 2019 because of overcrowding. This one island received 5.5 million people on holiday last year.

When a place has more demand than it does hotel supply, that creates a situation where a whole island can be sold out in peak vacation periods if you are trying to book a hotel. If you have a few couples or a group, however, you can end up spending the same amount or less and have a mansion at your disposal instead.

This Kamini Villa or Santorini goes for $784 to $1,882 a night depending on the season and sleeps six in three bedrooms. On a per-person basis, that’s on par with many hotels, but you get this pool all to yourself: 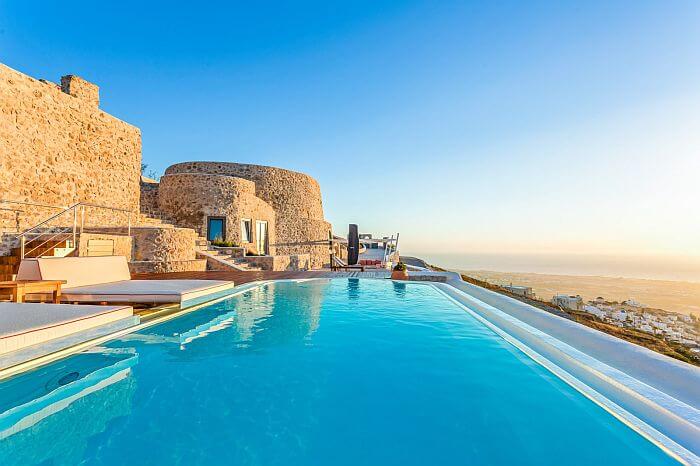 The place also has a hot tub, TVs, WiFi, and a wine fridge. As you can see from that photo, you’re not far from the beach. You get airport transfers, breakfast, and a rental car included in the rate.

Or for about the same price, you can get this villa with four bedrooms in town in Mykonos, another place where lodging is hard to find in popular months unless booked way ahead. Four couples could stay here and have a daily sundowner by the pool looking out at the sea.

Find Your Own Quiet Island Spot

You can get the best of both worlds, however, by going to an island that’s not mobbed with party-hardy crowds and throngs of daytrippers from cruise ships. For a real Greek experience, rent a home on an island where you can step back to a quieter time in history.

The gorgeous island of Paros is on the same ferry line as Santorini, but gets a small fraction of the visitors. In this Agnati Villa on the island, you can stretch out for less than $1,000 a night in some months but get a four-bedroom home that will tick off all the Greek elements you dreamed of. You get traditional stone architecture with white-washed walls and exposed beams inside, then a panoramic view of the ocean beyond your infinity pool outside.

Some of the best rental deals are on the north shore of Crete. There are some three-bedroom villas for rent there that start at less than $600 a night, for elegant homes with a pool and terrific view.

It can be a little scary to commit to a few grand in payments for a house you’ve never set foot in, no matter where you stay, which is why we advise renting through a trusted agency that has been around for a while. With HomeAway, you know you have a few decades of history in dealing with any problems that come up.

Have you ever rented a large home with a group of people in an area where hotel rates were inflated or places were sold out? How did it go?