One of the most important Christian pilgrimage destinations in the world — Jesus’ hometown, Nazareth — is a surprisingly unassuming medium-sized Israeli city in the rolling hills of the Galilee. Perched on a ridge overlooking the compact and densely populated downtown is the brand-new Ramada Nazareth Hotel, a welcome addition to a relative backwater that has only recently begun to attract accommodations that meet internationally recognized standards.

In fact, the spanking new Ramada Nazareth complex is the only hotel in the entire north of Israel bearing a brand that commands global recognition. It also boasts one of the most impressive lobbies in that part of the country.

Interestingly, the establishment could serve as a symbol of co-existence in a fractured region beset with tension: the Arab ownership group and largely Jewish management team work together harmoniously with a professional staff comprising primarily Christian and Muslim Israelis.

The compact bathrooms are dominated by spacious shower stalls, fitted with both overhead and handheld showerheads, although some are equipped with bathtubs. The amenities are plentiful, comprising not only Sea of Spa toiletries enriched with Dead Sea minerals, but also dental kits and shaving supplies. Terrycloth bathrobes and slippers are provided as well. 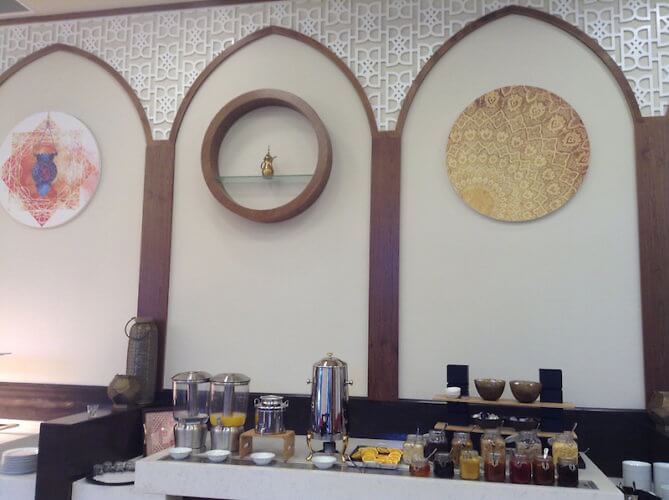 The Ramada Nazareth is home to two fine restaurants: Saffron and Locanda. The former is the house dining room, which serves lavish buffet breakfasts and dinners featuring dishes representing both Middle Eastern and Western cuisine; considering the quantities of food prepared and served, the quality is excellent. Moreover, guests who are not part of organized tour groups (which generally constitute the majority of the hotel’s occupants) are entitled to “upgrades” not part of the usual spread: the hotel’s executive chef grilled succulent lamb chops especially for us on the evening of our visit.

Locanda, meanwhile, is an Arabic-Italian fusion restaurant off the main lobby, with a panoramic view of the city. This restaurant and bar is the domain of a separate chef, Elias Mattar.

In addition to the two dining establishments, the Hedon Bar is located on one of the hotel’s upper floors, affording an even more sweeping view of Nazareth and the surrounding countryside. In the summer months, a Bedouin tent is pitched on the expansive terrace, offering desert delicacies.

The Hedon Bar is also the venue for occasional special culinary and/or cultural events organized for guests on the weekends. For example, during our visit the hotel’s pastry chef demonstrated the preparation of kanaffeh, a distinctive sweet treat that is popular with Israel’s Arab and Jewish populations alike.

Additionally, on Saturdays, the Ramada offers free tours of Nazareth’s market and renowned holy places. As an optional extra, the hotel will also arrange culinary tours of the city — which has been featured on the international television show “Street Food around the World” — led by the hotel’s chef, or Chef Mattar. If there are not enough people from the hotel to justify a tour, ask the front desk to book you a culinary tour through the Nazareth Board of Tourism.

Nazareth is a city that requires a lot of walking to see and experience properly, so it is good to know that when you return to the hotel, you can relax in the indoor pool, the whirlpool bath, and the sauna — or by treating yourself to a massage at the Jasmine Spa.

Published rates: Double rooms start at $194 per night, including breakfast; 15% off a stay of two nights, 25% off a stay of three nights or more. Make your reservations at the hotel website or use Travelocity.

Text by and photos by Buzzy Gordon, who was a guest of the Ramada Nazareth Hotel for purposes of review.