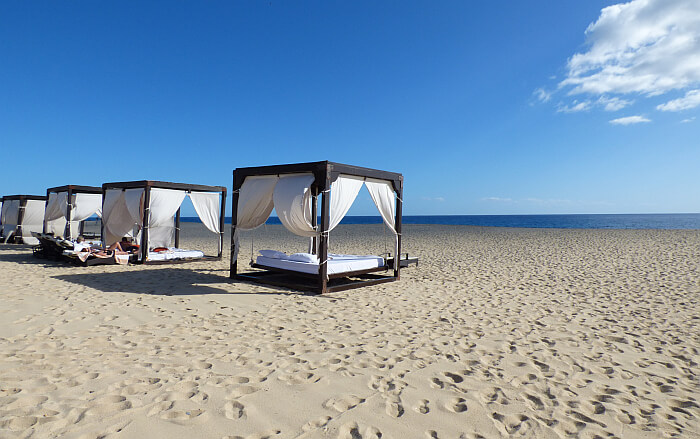 The Los Cabos region at the tip of the Baja Peninsula is the most upscale of Mexico’s beach resort areas and there are far more a la carte hotels than all-inclusive resorts. The real standout for those who want to eat and drink well to their heart’s content on vacation is adults-only Pueblo Bonito Pacifica. This beach resort is around the bend from the famous arch of Cabo San Lucas and it sits on property that hosts one of the best (and most challenging) golf courses in a region full of them: Quivira designed by Jack Nicklaus.

Just a few decades ago there was a whole lot of nothing on this Pacific side of the peninsula and all the action was in the town of Cabo San Lucas itself. Starting in the late 1990s, however, the owner of Pueblo Bonito – a company that also has hotels in Mazatlan – started buying up land here. He eventually ended up with 1,850 acres and it now contains a whole complex of two hotels, timeshares, multi-million-dollar vacation homes. and the golf course. With a whole lot of empty space still in the mix too.

So you won’t feel hemmed-in at Pacifica, where you could hang a right from the pool and walk for miles on the beach before a cliff stops you. Don’t plan on going for a swim though. As in much of the Los Cabos region, the waves in this area where the Sea of Cortez meets the Pacific Ocean are downright nasty. Experienced surfers are out in a few places, but the riptides here are nothing to scoff at. It’s better to just watch them from your lounge chair or daybed on the wide expanse of sand while sipping a cocktail and maybe wading in the surf when a school of rays starts jumping out of the water at sunset.

The large swimming pool has plenty of lounge chairs and waiters make the rounds bringing drinks or food. There’s a dining area by the pool for lunch, with a good array of Cabo seafood options, typical Mexican dishes, and casual international choices. The cuisine is good overall at the various outlets here, which include the main buffet restaurant with indoor-outdoor seating and Pescados, a seafood and sushi outlet. There’s also a deli on site and a complimentary shuttle to the golf clubhouse brings you to a steakhouse with a view of the ocean. There are several attractive bars scattered around the property, plus a fire pit to gather around at night.

Guests here also have access to restaurants and bars at the two sister properties. One is on the top of a nearby hill and has a fine dining restaurant, the other is in Cabo San Lucas itself, so it’s a good stop after a day of whale watching or shopping.

Guest rooms don’t live up to the kind of palatial digs you’ll find at a Velas, Secrets, or Now all-inclusive resort. They’re a standard hotel room size and are very minimalist when it comes to furnishings. The only place to sit (besides the bed) in my room was on a desk chair. You do get a comfortable mattress though, a mini-fridge stocked with beer and soda, and plenty of drinking water in plastic bottles that are hopefully getting recycled. Robes and slippers are standard, 24-hour room service is part of the all-inclusive plan, and there’s turn-down service at night. There’s lots of marble in the baths and pretty inlaid stone patterns around the bed in the marble floors.

The big draw here for many guests is going to be the challenging and dramatic Quivira golf course, which opened in late 2014 and has already generated a lot of chatter as one of the best in Mexico. Some of the holes are on the side of a cliff and others have great water views. There are all kinds of crazy hidden flags, surprise obstacles, and prominent bunkers to avoid. Greens fees can be several hundred dollars if you didn’t purchase a stay-and-play package, but the all-inclusive service extends to the course. There are comfort stations along the way where they prepare food as they see you approaching and you can order up a cocktail or beer before teeing off again.

There’s a spa on site here which requires additional charges, but the masseuse I went to did a terrific job of working out the kinks from too much time behind a computer. The steam room and whirlpool afterward took care of what remained. A few in my group grabbed a shuttle and tried out the award-winning Armonia one at sister Pueblo Bonito Sunset Beach and liked that one better: has some natural light and water views instead of being in the basement.

There are a few small issues that keep this property from reaching the true high-end tier occupied by the best luxury hotels in Los Cabos. There are the inherent all-inclusive ones like scratchy plastic bracelets, having to sign for things that are already included, and staffers that didn’t get much training before waiting on customers. There’s currently some construction going on which may or may not be the reason guests in one wing were complaining about the hot water going out.

The new Towers at Pacifica wing that opened after this review posted will take things up a notch, however, with a higher level of service for those premiere guests and some additional public facilities. See info on that here.

All-inclusive rates usually start at around $250 per person. Look for package deals by booking direct with the resort or check rates at Hotels.com and Priceline.

Review by editor Tim Leffel, who was hosted at Pueblo Bonito while on a press trip sponsored by Quivira Golf Club for an online luxury travel magazine. As always, all opinions are his own.