Obviously, the Spanish Parador de La Gomera was not built when Christopher Columbus gathered his provisions and water on this Canary island (La Gomera) before heading off for parts unknown. If such a lodging place had existed then, I wonder if he would have sailed away so easily.

Having stayed in several of Spain’s extensive collection of paradores—the Spanish government-run lodgings, many converted from ancient monasteries or castles, I was surprised to learn that this parador was built brand new. You’d hardly guess it; it’s such a perfect rendition of the island’s architectural style and charm. 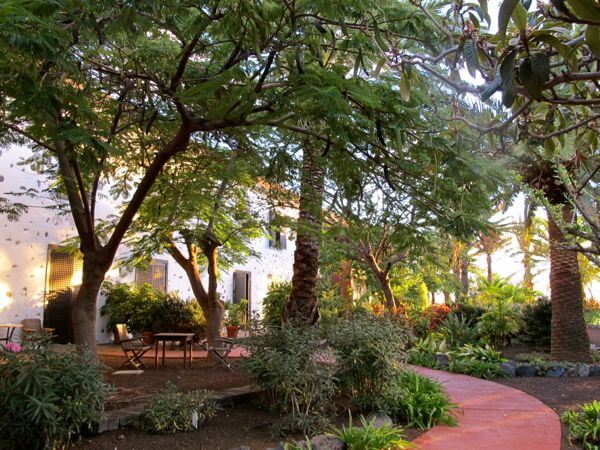 A few of the 60 rooms (most are twin-bedded) have sea views with terraces while many (including mine) overlooked the beautiful sub-tropical gardens (although I could see a small blur of blue in the distance).  The room was simple and spacious, airy and inviting –with a casually elegant island vibe. There was air conditioning (not needed), a minibar, nice desk area and t.v.

I loved the hardwood floor, high beds and heavy wooden window shutters you could latch shut or open to those aforementioned garden and sea views below. Even better, at night, you could see the moon. The window ledge itself was the old-fashioned kind–wide and deep like a window seat. And in the morning, I awoke to that lovely sweep of palm leaves rustling, indicating you are in a tropical region of the world.

The entire parador is decorated minimally but stylishly with navigational instruments from the time of Columbus (he really did leave from La Gomera on his eventual quest to America) as well as marine references and art. It’s fun just wandering around the property—both inside and outside.

A swimming pool is picturesquely located overlooking the Atlantic and Port San Sebastian where you can watch the ferries arriving from the other Canary Islands. If the air is clear, in one direction you can see as I did—Mt. Teide (the highest point in Spain) on Tenerife. At twilight, sitting on a strategically placed bench high above the port, you can enjoy the twinkling lights of the city too. It’s a totally romantic—destination wedding, anyone?—kind of place.

Breakfast (approximately $23) is pricey and not included in the room rates (which range from $175 to $275—higher than most paradores due to its location no doubt, but still reasonable compared to other exotic island luxury lodgings). At least one morning while you are here, I would suggest adding breakfast to your bill. It’s a fresh and lovely mix of offerings, and you can sit by the sunny wall of windows that look out on the gardens. Better yet, you could dine alfresco at one of the tables in the garden.

Wi-fi is free in the courtyard and lobby area but not available in the rooms, which isn’t the most convenient. Then again, sitting in the gorgeous courtyard was not exactly a bad thing. And in a peaceful place like this, genuinely made for relaxing and re-charging–you probably shouldn’t even be on your computer anyway, should you?

Book online with Priceline or directly with the Parador.

Review and photos by Donna Tabbert Long who stayed at the Parador de La Gomera as a guest of the Tourist Office of Spain (Chicago).

An avid traveler and food lover, Donna Tabbert Long is an award-winning freelance writer. She's the first to admit her siren songs on the road often lead her to sugar, Champagne, and bookstores. Finding bakeries, patisseries, and chocolate shops, along with a few cool spots for sipping some bubbles--and she knows she's arrived. Part of the pleasure during such searches includes discovering the best places to rest her weary body. Her articles have been featured in National Geographic Traveler magazine, the Minneapolis Star Tribune, Dallas Morning News and AAA Home & Away Magazine. When she's not traveling, she's at home in Minneapolis. Catch up with her on Twitter @tabbertlong.