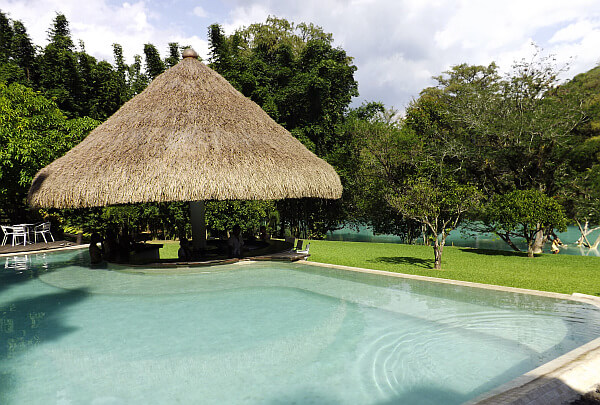 The Huasteca region in the east of San Luis Potosi state is one of Mexico’s top adventure playgrounds, an eden of rivers and waterfalls. Huasteca Secreta is the first in a series of hotels being built in the region that take advantage of dramatic settings in unspoiled areas.

This resort’s drama comes from a giant thundering waterfall you can overlook from a restaurant that’s almost too good to believe in such an offbeat location. In both taste and  presentation, you may think you’re in one of Mexico’s sophisticated city hotspots instead of a place that required a long drive through sugar cane fields from small city Ciudad Valles.

Desserts are heavenly, plus there’s a good wine selection and polished service from the attentive staff.

The hotel itself can be reached by car as well, but on foot you reach it via a long stairway going down the side of the cliff to the riverbank below. Once you’re down there, you find the bluish-green water the region is known for, a great lawn, and the rest of the buildings. The centerpiece is a large outdoor pool with lounge chairs and tables that has a swim-up bar on one side. With a view of the river across the grass, it’s a great place to spend the afternoon lazing around.

There are two styles of accommodations to choose from and they vary greatly in terms of style, space, and price. The simpler ones are in a group in the woods, with a feel more like a tented camp than a resort. They are basic in their decoration and to enhance the camping feel, you actually leave the bedroom to visit the bathroom behind your unit. There’s air conditioning, but considering there are permanent screens along the top of the walls, it’s kind of a waste of energy to leave it on.

Much more attractive are the large bungalows, which are the size of a small house and have two floors. One bedroom is upstairs for whoever gets the master, another is down with two queens and two bunk beds, plus there’s a day bed that can sleep another person. The large bathroom has fluffy towels, good toiletries, and a nice outdoor shower.  Each has a deck with river views that is really enticing, set up with lounge furniture and a hammock for an afternoon nap.

The secret? A really unique adventure unlike anything this middle-aged travel writer has experienced before. There’s the giant waterfall, a flat area, then another smaller waterfall downstream. In the calm water between the two waterfalls is a natural eddy going around in an oval. So you don a life jacket and helmet and jump in with a guide. You swim toward the waterfall and after a while you don’t need to swim at all: the water carries you toward the loud and thundering beast in front of you. Right before you would get pummeled you climb onto a rock ledge to catch your breath—and maybe pose for a photo like this one on the right.

Then it’s time for phase two. You swim like mad across the river and then once you’re past the halfway point, the current picks you up and carries you back downstream again. You can kick back, float, and just enjoy the ride. Of course the staffers can help set up excursions outside the property, where you can go rafting, waterfall jumping, or rappelling.

Rates at Hotel Huasteca Secreta are reasonable, running $82 to $200 double with breakfast. You will probably get the best rate booking direct through their website, but be advised the English button on the site is just for show: it’s all in Spanish. There are some English-speaking staffers on site though, which isn’t always a given in the interior of Mexico where there aren’t many foreign tourists. You can also reserve your stay through Trip Advisor.

Review and photos by editor Tim Leffel, who was hosted by San Luis Potosi Tourism and Huaxteca.com tour company on a pre-trip for Adventure Travel Mexico (ATMEX).