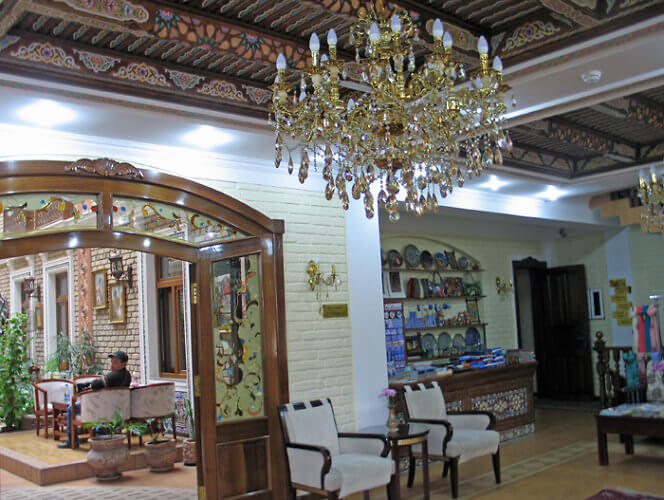 There’s something dazzling everywhere you look in the first floor lobby. That’s probably why the grand staircase is a popular spot for wedding photographs — even if neither the ceremony nor the reception was being held in the hotel. (Sometimes the bridal couples are lined up outside for their turns in the kleig lights.) I must have interrupted a half-dozen photo shoots going up to my room during my short stay (not that I was rude, but, because the hotel has no elevator, the stairs are the only option.) 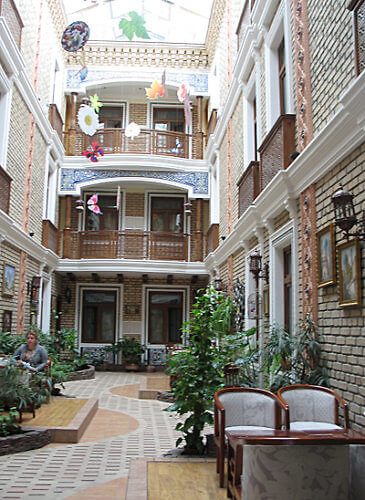 My second floor guest room overlooked the compact three-story, covered courtyard, complete with artificial flowers and recorded birdsong. I hope that no one sitting there counts on having a confidential conversation, because each word reverberated off the walls and ceiling and right into my room. Fortunately for the speakers, I’m not fluent in either Russian or Uzbek.

The hotel has a fitness room, two swimming pools (one indoor, one outdoor), and a Finnish-style sauna — although I must confess that I didn’t have time to enjoy them. There’s too much to see and do in this former Silk Road trading center that’s considered one of the oldest cities in Central Asia: Alexander the Great conquered Samarkand in 329 BCE, and it was Tamerlane’s capital city in the 14th Century.

The Silk Road — not exactly a marked thoroughfare, but a series of interlinked trade routes inaugurated by the Han Dynasty based in Xi’an, Shaanxi Province, China, in the second century BCE to the Mediterranean — was named for the quantities of silk fabric exported from China. Although active trade diminished in the 18th century, modern China is reviving the route East through its initiatives involving rail lines and a high speed highway as well as maritime routes through the Indian Ocean and the Red Sea.

One surprise: there’s a very precise price list for every item in the guest room, should it be damaged or “disappear” while you’re visiting. I’ve never seen a list such as this anywhere in the world, so perhaps Samarkand is unusual in the number of guests who pilfer water glasses, televisions, hand towels, pillows, mirrors and such. In addition, there’s a 50 euro penalty charge if you deign to wash and hang to dry any personal laundry in the room. Yikes!

(There is, however, free WiFi.)

Double rooms start at around $100. You can book at any of the usual booking websites such as Expedia or TTravelocity.