It was a dark and stormy night when I landed in Columbus, Ohio. Okay maybe not stormy but definitely dark. A short 15 minute ride from the Port Columbus Airport through downtown on a brick-paved street in an urban neighborhood to the German Village Guest House, more an historic boutique hotel than B&B. The German Village Guest House was built in the late 1800s, converted into the bed and breakfast hotel in 2005.

The colorful trees lined the streets and grasped the last of the autumn leaves. Historic brick buildings, preserved from 1800s, serving as homes, stores and restaurants – I’ve entered the 233 acres of German Village, listed on the National Register of Historic Places. My late night flight only gave me a glimpse of the beauty of this central Ohio neighborhood, which feels surreal like it belongs on a page of an exclusive Boston neighborhood. 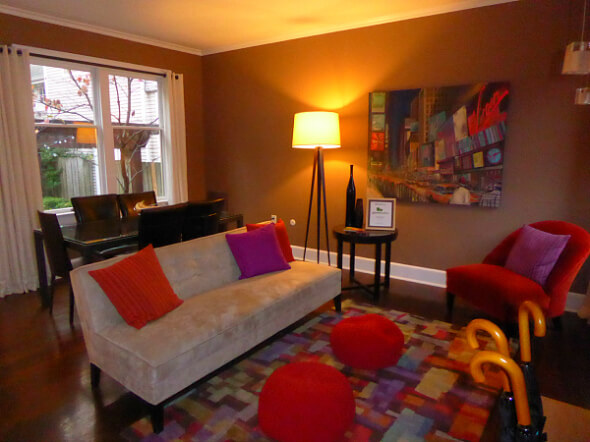 With so many trees and the darkness, it was difficult to see the house numbers when trying to locate the AAA Three-Diamond Hotel, the German Village Guest House. (Sorry, Columbus neighbors, I thought I was at the right place!). On-street parking is available, but when we arrived, there literally wasn’t even a spot to stop and unload the suitcase, so we double parked.

We finally found the right house, and I opened the wrought iron gate, walked up the steps to the front porch. Automated check-in and check-out made my arrival easy as pie. Since it was after 11 pm, I accessed the bolted front door via a key code sent prior to my arrival. I entered the dimly lit living room, through the night-lighted kitchen (thanks for keaving the light on!) and up the stairs to my accommodations.

At the top of the stairs to the right, the door was open to Room 2, my overnight accommodations, really a suite. Two large windows overlooked Jaeger Street. The ceiling sloped down toward the TV and at the queen size bed, but the ceiling height was still more than adequate.  A private bathroom with shower was steps from the bed. A comfy chair was tucked into the corner next to the window.  The only thing lacking in this room was a work desk, but I pulled the TV tray and plugged into the complimentary WiFi.

My accommodations at the German Village Guest House Room 2,

The German Village Guest House, where I stayed, features three guest rooms, two upstairs and one off the kitchen. My friend claimed the oversized suite across the hall from me (which included a work space and larger bathroom), while a business traveler, who said he often stays here, took the downstairs room. In an apartment building nearby are two 800 square foot rooms, the Whittier Suites.

Containers filled with cereal round out the options. When I walked down the stairs just after 7am, the friendly innkeeper John greeted me while setting up the goodies from breakfast. I also noticed complimentary snacks in the corner, fresh cookies and iced tea.

And not to miss, just off the living room is the beautiful garden.

The only thing I found lacking at the German Village Guest House was more rooms! With limited accommodations, you’ll need to book well in advance.  This B&B boutique hotel is truly a central Ohio hidden gem located within the historic district in Columbus. I found my brief stay delightful and the accommodations relaxing and elegant.