Cancun is the ultimate mass-market vacation destination. It has gone from a deserted stretch of sand prior to 1974 to a hotel-packed strip of coast that pulls in close to four million visitors a year. (More than most entire countries elsewhere in Latin America.) So it’s not unusual for a hotel like Fiesta Americana Grand Coral Beach to have 602 suites. The tricky part is making those 1,000+ guests feel like more than a number.

Coral Beach though, part of the established Mexican chain Fiesta Americana, doesn’t feel like a convention hotel. It wows you when you enter the lobby, wows you again in your room, then really makes an even better impression when you get out to the pool and beach. It’s huge, yes, but it’s a well-designed property that never feels overwhelming or impersonal.

It initially feels more like a city hotel than a beach resort, with a mountain’s worth of marble in the lobby and hallways, plus furniture that doesn’t look like it would go well with sand and wet swimsuits. (There’s an attendant by each door with towels and a spray bottle in case.) There’s an atrium with vines hanging down, brass railings on the stairwells, and glass elevators that offer a quick glimpse of the gorgeous Caribbean waters.

Outside though, the design hews to the expected beachfront playbook. You get multiple pools for families and couples, two swim-up bars, a water volleyball net, and fast waiters fetching drinks while you lounge around. The beach area here is not a non-interrupted stretch of sand for jogging as this hotel is on the northern end looking across to Isla Mujeres, but it’s a great beach for swimming and the water is beautiful.

The spa at Fiesta Americana Coral Beach is a somewhat recent addition and they didn’t go halfway: it’s a 40,000 square foot facility with a 10-stage hydrotherapy ritual that’s designed to take two hours. Of course you can also book more traditional treatments and massages as well.

There’s an excellent variety of restaurants here, with the Isla Contoy one being the standout if you’re dreaming of seafood and a cold beer with a view of the blue and turquoise water. It’s built in the popular Yucatan style with a thatched palapa, but service is top-notch and everything is beautifully presented. La Joya has more of a colonial Mexican feel, with a great tequila selection and a variety of seafood and steak options in local styles. A daily breakfast buffet is in a large and bright space with marble floors and the fine dining French and Mediterranean Le Basilic is a AAA 5-diamond restaurant. If you’re put off by the U.S.-level prices at these places, you can get something simpler at Coral Cafe or just walk out the door to be in the thick of Cancun’s main commercial district in the hotel zone. 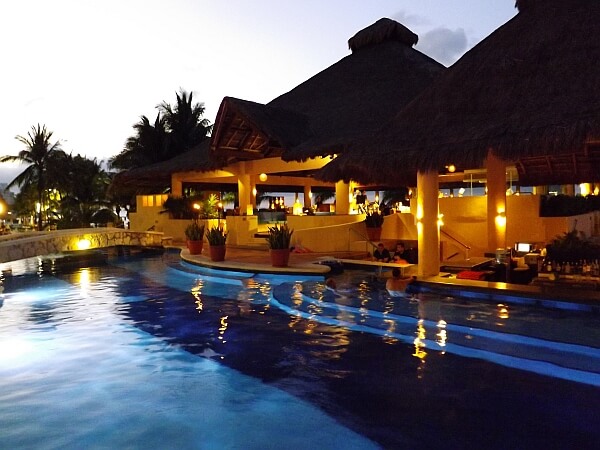 Rooms are all set up as suites, with the smallest being two-level junior suites that have an L-shaped sectional for lounging or a kid’s bed. A marble-topped table and two chairs joins another set of furniture on the balcony. Beds are configured as two doubles or a king and many of the basics are taken care of well: plenty of mirrors, easy-to-reach outlets, good lighting, a large flat-screen TV, and a safe that holds a normal sized laptop. When I visited some rooms still had CD alarm clocks, but iPod docks are making their way into all rooms in phases. Baths are well-stocked with Gilchrist and Soames toiletries and plenty of counter space. Double nozzles in the shower crank out good water pressure and all rooms have bathrobes and slippers.

Room sizes and perks go up from there, with multiple levels of larger suites. Some have terrific terraces with a panoramic view, plus an extra room to put the kids in. Speaking of kids, there’s a family pool with a shallow section, a small playground, and a kid’s club.

There are a few minor oddities in the resort, like the Sunset Bar closing before sunset and a charge for the coffee packets (30 pesos) and teabags (20 pesos) in the room. Wi-Fi is free and usually works well though, plus the fridge gets stocked with soda, beer, bottled water, and snacks. At turndown, there’s a nice chocolate and a bucket of ice.

While some may be put off by the sheer size of this resort, it’s a far cry from the vacation factory all-inclusives this region is known for and the staffers try hard to make everyone feel special Rates start as low as $250 a night double in low season and can go up to a few grand for a presidential suite. This is not marketed as an all-inclusive resort, but you can purchase a plan that makes it one through an agency or get their Grand Plan rooms that put you on an upper floor and are set up like the club level at business hotels, with snacks and drinks. Book direct with Fiesta Americana or check rates at Preferred Hotels or Hotels.com.

Review by editor and travel destination expert Tim Leffel, who was hosted by Coral Beach Hotel while a guest of Mexico Tourism during their annual Tianguis travel fair. Photos by Leffel except for the spa shot, courtesy of Fiesta Americana.