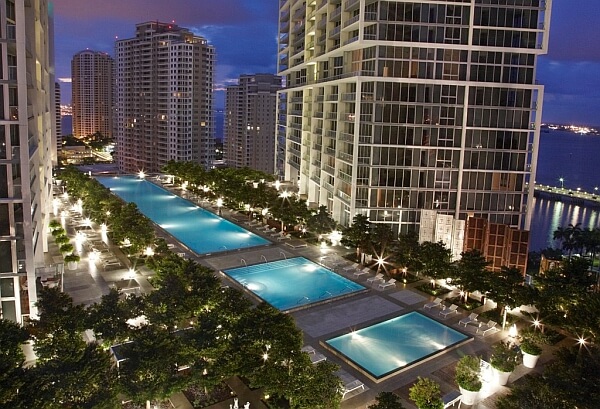 Editor’s note: At the time of review this was a Viceroy Hotel, but the owners sold it to a Middle Eastern buyer who immediately turned it into W Miami Hotel, now part of the huge Marriott conglomerate. We assume the facilities and design stayed intact, but check more current reviews to see how it’s doing with the rebrand.

The W Hotel Miami may be located in downtown Miami, but it’s got the glitz and style of South Beach too. Part of a complex that includes luxury condos as well, it strikes quite a pose when you enter: the columns are faces in the style of Rapa Nui, but more subtle, elongated, and metallic.

Inside, the lobby can get a bit tight, but you’ll have plenty to look at, from the sculptured giant white head on the reception desk to the whimsical furniture in the sitting area. This is a hotel where every detail in the design has been pored over: even the hallways and elevators ask your eyes to wander and check out the eye candy.

The pool complex shown at the top is the centerpiece, with the one in the middle being a giant hot tub and the infinity pool at the top looking out over the waters surrounding the Brickell area. Naturally there’s a poolside bar. Unfortunately, Hurricane Sandy was starting its romp up to New York when I was there, so swimming could have resulted in landscaping hitting me in the head.

I did use the state-of-the-art fitness center with a view though, which led me past the co-ed hot tubs in the spa, with a wall of glass on one side. As you may be able to tell from this photo below, it was designed by Philippe Starck. It has many of his signature touches, including a grand chandelier and lots of white—including the book covers on the shelf. Naturally there’s a wide variety of spa treatments and massages on offer here. You’re in Miami, so you have to look your best, right?

The 15th-floor Eos Restaurant was making a transition to a new Mediterranean menu (with a new chef) when I visited and going by the dishes I tried, diners have a lot to look forward to. It serves all three meals, with a view out to the water. There are plenty of healthy items to stay ready for the beach, but plenty of indulgent ones too with influences from around the Mediterranean. A talented bartender, signature cocktails, and a good wine list complete the package.

There’s also a Club 50 nightclub that is, you guessed it, on the 50th floor. As you can probably imagine, this is quite the place to feel like a celebrity, looking out at the city lights.

Kelly Wearstler designed all the interior spaces, which are a bit hard describe apart to say there’s a heavy Asian influence. As in Chinese dynasties Asia, with a bit of Mad Men-era updates to lighten things up. You definitely can’t call it boring as you stroll past your Ming dragon lamps and light up the big Chinese mural behind your bed. An airport Marriott it is not.

There are certainly more staid choices within a few blocks for business travelers who prefer predictability, but this property had built a dedicated clientele when it was a Viceroy and great word of mouth by surprising guests to the upside. Rooms feel quite large for a city hotel, helped by the fact that the baths are almost as large as the sleeping space, with a separate shower and soaking tub that looks out to the bedroom through a wooden screen. Most of the amenities you would expect are here, though you’ll have to pay for Wi-Fi and robes are not standard—perhaps going by the intimacy kit in the minibar, they want you to just stay naked when the door is closed. The largest rooms are suites with one or two bedrooms and a kitchenette.

This is a sexy hotel, from the spa to the pools to the restaurant to the rooms. If you’re looking to mix a little pleasure with your business or are just spending a night or two in town before a cruise or flight, W Miami should make you feel like your hotel is more than a stopover with a bed.

Rates start at around $200 for a standard on the weekends and go up from there. See more details and book a room at Hotels.com or Expedia.

For more about the area, see the Miami and Beaches website.

Review by editor Tim Leffel, who was hosted by the hotel while writing a story about Miami. Photos by him except the pool and spa photos, courtesy of the hotel.