India is generally not a country you want to visit at its hottest. In April through July, before the monsoons hit, temperatures frequently run between 90F and 104F. May is the hottest month, but the others can still bake you if you’re touring the most popular tourist areas.

If that’s when you’re planning to go, you probably want to escape to the hills.

When the British ruled what is now India and Pakistan, they didn’t have an easy time with the climate. Their uniforms and pale skin were both badly suited for it, so they escaped to higher elevations and broke out the gin and tonics.

Here are a few hill station spots to consider if you want to do the same, with a general sense of hotel prices for each.

The most prominent hill station in India was Shimla, which became the official summer capital of India starting in the 1860s. With stunning views, nearby lakes, and a mall area for people watching, it hit all the right buttons for the conscious-status participants in the colonial game. Getting there is half the fun, with a narrow-gauge “toy train” snaking its way up from below.

Hotels here range from the luxury Oberoi Cecil rooms starting at $220 per night down to backpacker places that go for under $15. Some have a view like that one from Zion Hotel at the top.

This popular hill station has a sacred river, mountains, lots of healthy food, and…hundreds of bodies in contorted positions. Hotels in Rishikesh are numerous at the low and middle ranges of the budget scale thanks to all the backpackers and yoga enthusiasts who flood the area all year. Some get off the bus here and forget to leave.

You can get a suite at this hotel pictured above for $24, or drop down to a garden double with its own bath for $8. Spend more than $90 and you’ll be in a top-rated upscale hotel on the Ganges River.

McLeodganj in Himachal Pradesh is the seat of the Tibetan government in exile, which means “the real Tibet” in this day and age after the Chinese crushed Tibet itself into what is now closer to a movie set shell. This is the place to hear the monks chant and eat some momos while enjoying the cooler climate.

Far more budget travelers than moneyed tourists visit this region, so hotel prices are low.  I found 37 hotels under $40 a night double on one booking site and about the same number from $40 to $70.

At more than 3000 feet in elevation, this area is significantly cooler than most of Rajasthan, and wetter too. Besides the climate, you can enjoy the truly spectacular Jain temple of Dilwara and marvel at the marble carvings. This garden bungalow below, Hill N You by Ashoka, goes for around $50 a night. See other Mount Abu options at Booking.com.

I once got stuck here for days while I waited for civil unrest to die down and the roads to open back up, but this is usually a peaceful hill town with a small lake in the center. Hike the surrounding hills and you’ll get a view of the Himalayan mountain range. 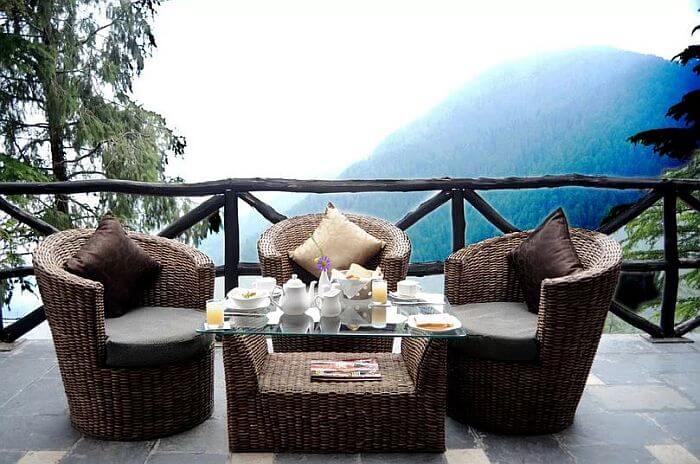 Named after is named after Lord Dalhousie, a one-time British Governor-General in India, this town built on five hills still has some standing Victorian architecture and is known for its healing mineral springs. Located in Himichal Pradesh between 6,000 and 9,000 feet in altitude, it rarely tops 75F degrees even in the hottest months. There are plenty of fine places to stay here, including Aamod Dalhousie pictured above.

These hill stations don’t have imposing forts or opulent lodging options like Neemrana Palace Fort Hotel, but if you are traveling through India during the hottest months of the year, you might want to seek out a higher elevation now and then.

Have you ever visited any of the northern hill stations of India? What did you think?