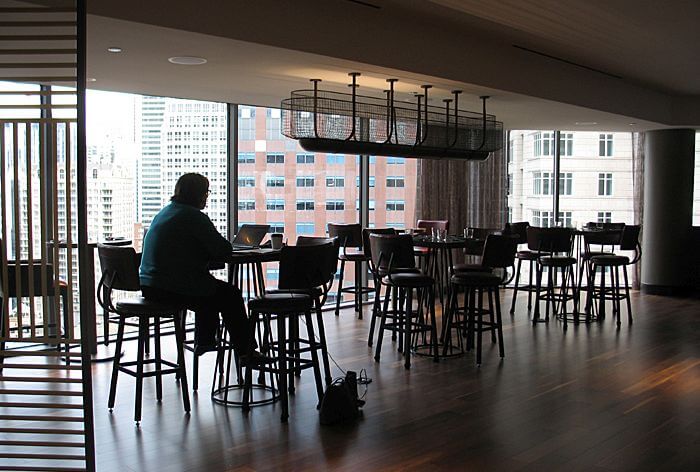 When I drove up to the Conrad Chicago, I was surprised that I didn’t recognize it at all. I’d reviewed the hotel a decade ago for another magazine and thought this would be a reprise. Not so. It’s a whole new hotel: same name, different location — a couple of blocks north of where it used to be. This incarnation opened in mid-November last year.

Streetside, the hotel was unremarkable — a discreet canopy with a short half-circle driveway beneath at 101 East Erie Street, just west of Michigan Avenue and right behind Crate & Barrel’s Magnificent Mile location. (One does have to approach it from the west because Erie is one-way east.)

The doorman was quick to greet me, and offered to have my suitcase taken directly to my room (although I opted to take it with me to check-in, which was on the mostly-glass-walled 20th floor). Interiors were designed by Pierre-Yves Rochon who, interestingly enough, does not feature the Chicago Conrad on his website’s list of projects.

Colors in the hotel revolve around orange, brown and tan, from the flowers in the lobby to the upholstery on furniture in the guest rooms. I really appreciated having a table instead of a desk, so I could spread out my work — and have room for a snack.

The hotel boasts smart technology in each of its 287 rooms and 24 suites, but what that meant to me is that I couldn’t figure out the various options on the touch panels replacing light switches. If I pressed “sheers”, the blinds in every window of my suite either opened or closed; “blackout” evidently referred to the drapery. In order to turn off the lights at bedtime, I had to walk out to the entrance hall and press “master switch” by the front door, then stumble back to the bedroom to sleep. There were no instructions for the touch pads anywhere that I could find, and evidently I wasn’t nearly “smart” enough to figure out what do do on my own.

Fortunately, the in-room WiFi was easy to access — and that’s really essential to this traveler.

If you book through the Hilton Conrad site, there are frequent package deals. When I was there a package that included valet parking and $50 credit in Baptiste & Bottle, one of three restaurants in the Conrad. You also can book on the usual hotel booking sites such as Priceline. Free parking is a fabulous deal in a city where leaving your car for 24 hours can mean a $75 fee. The food credit will (almost) buy breakfast for two at that 20th floor eatery. Rack rates hover around $300 per night at this five-star property.

For my first breakfast at Baptiste & Bottle I ordered what I thought was lox and cream cheese on a bagel — but turned out to be a whole lot more (pictured). I downshifted to oatmeal on my second and got a tasty fresh fruit garnish as well as maple syrup. Both breakfasts were magnificent and I enjoyed the view of Michigan Avenue while I lingered over coffee.

(All photos by Susan McKee, who was a guest of the Conrad Chicago)