Founded by Colonel William F. “Buffalo Bill” Cody in 1896, Cody, Wyoming is 50 miles from Yellowstone National Park’s east entrance. This historic town is a perfect hub for a visit Wyoming’s historic and nature-themed offerings . Fortunately, the hotel options are plentiful. Here are three suggestions connected to Cody’s history that fit a variety of tastes and budgets. Although Cody is fairly quiet until spring and Yellowstone National Park opens, these are the days for thinking ahead. Or if you want some quiet and time to renew, this may be the perfect time to head west. 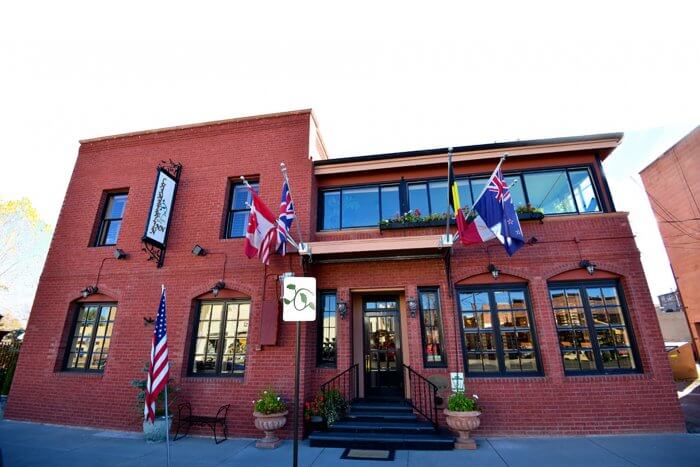 Boarding House Beginnings;- In 1903, Chamberlin Inn got its start as a boarding house that expanded into an inn as years passed. Agnes “Aggie” Chamberlin who worked for the Buffalo Bill at the Cody Enterprise newspaper office, expanded her boarding house into the Chamberlin Hotel. The various additions are evident in the exposed brick walls of parts of the interior, including some of the guest rooms. 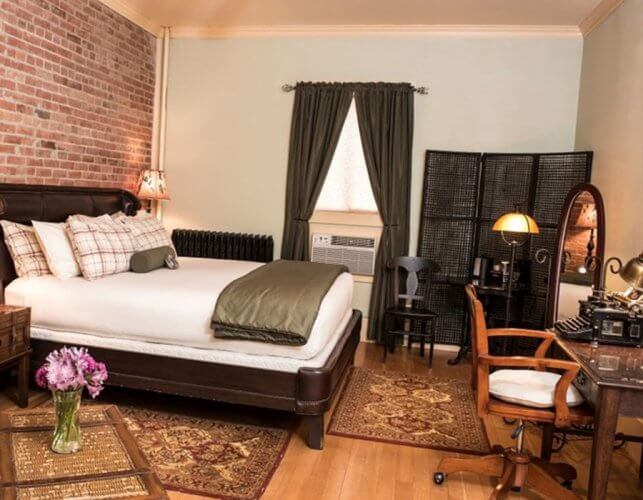 Throughout the years, famous guests include actors, authors and tycoons. Ernest Hemingway and Marshall Fields are among the notables. Hemingway stayed at the Chamberlin after completing Death in the Afternoon. The room where he stayed, a suite with a clawfoot tub and a courtyard view, is restored to reflect Hemingway’s lifestyle.

Rates – $145 for the Classic Queen to $999 for The Courthouse. Compare rates at Hotels.com.

Family-Friendly Budget with a Building Crew Past– The 83 historic Cowboy Cabins at Buffalo Bill Village, are cozy wood-paneled comfort. Buffalo Bill Village built in 1914, was originally made for the building crews who were developing Cody. The newly refurbished freestanding cabins range from single king to two queen beds to suites. Each has their original log siding. Pedestal sinks and showers are a feature in the cabin’s renovated baths. Flat-screen HDTVs with cable, free Wi-Fi and pillowtop beds are part of the modern updates.

Currently, the Cowboy Cabins are closed for the season – they open in April, but there are two other Buffalo Bill Village options. The Comfort Inn and a full-service Holiday Inn with a restaurant are open for business. Check out the Buffalo Bill cabins on Expedia, You can also compare rates for the Comfort Inn on Priceline and the Holiday Inn at Hotels.com.

Best Bar, Paranormal, and a Queen’s Touch– Built in 1902 by Buffalo Bill Cody, the Irma Hotel is named for his daughter. On the National Historic Register this hotel is a richly appointed history lesson. The suites are named after Cody pioneers. Cody’s original two suites have also been restored as lodging options.

Irma Hotel’s bar was a gift from Queen Victoria

One of the hotel’s must-see features is the long cherry wood back bar in the Irma Hotel Dining Room. Queen Victoria gave the bar to Colonel Cody following the royal performance of his Wild West Show. Throughout the hotel, period furniture, and paintings and photographs tell the story of Cody’s remarkable beginnings. For a more detailed description, check out Donna Tabbot Long’s Hotel Scoop review. She stayed in the Irma room.

For anyone interested in the paranormal, members and guests have reported ghostly occurrences such as a rocking chair that rocks on its own, the sound of jangling spurs, and an apparition of a man wearing a Calvary uniform and holding a sword.

Hotel Irma is also across the street from one of the Cody craft beer brewpubs.

Post by Jamie Rhein. Photos courtesy of the hotels.