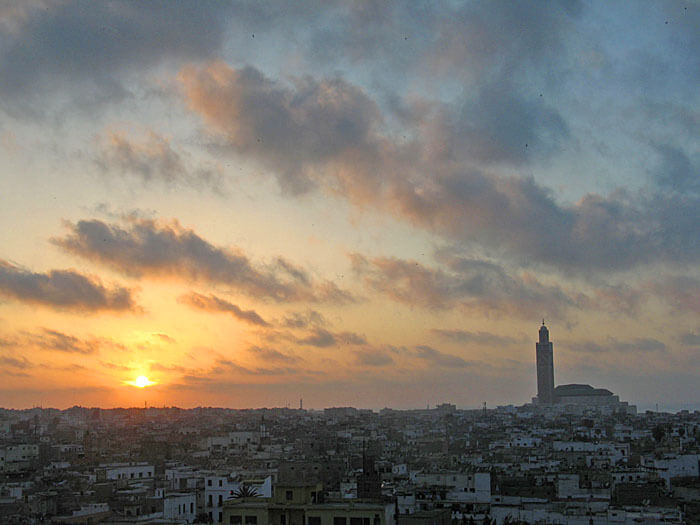 Sunset. The call to prayer echoed over the city and drew me to the wall of windows in my room at the Sofitel Casablanca Tour Blanche in Casablanca, Morocco.

I could see all the way past the imposing Hassan II Mosque as the sun dipped below the horizon. The sunset prayer — Salat al maghrib — has a special resonance in Morocco because the kingdom is the furthest west part of what the Arabic-speaking world calls the Maghrib (literally the West). I was watching the sun setting over the Atlantic Ocean west of the westernmost country of the Maghrib.

The Casablanca Tour Blanche is a five-star hotel and with every amenity you’d expect at that level and then some — from a thoughtful concierge with encyclopedic knowledge of the city, to elegant touches in the guestrooms. 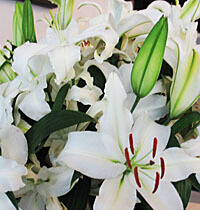 Aromatic white Oriental lilies fragranced the lobby where even the light fixtures are works of art.

The hotel, with 141 rooms including 30 suites, has free Wi-Fi, interpreters on call, easy-to-to-arrange transportation and even golf excursions. The suites, of course, include butler service.

My room had a lush color scheme to contrast with its white walls: an indigo carpet, a deep purple velvet bed cover, and magenta accent pillows on the tan suede couch. A wall of windows provided a view all the way west to the Hassan II Mosque along the Atlantic coastline. The in-room coffeemaker was by Lavazza.

There was a separate room for the toilet, a walk-in shower, heated towel rack and toiletries from L’Occitane. The bathroom was all shiny black tile and white porcelain with beaten silvery metal accents. It was separated from the bedroom by sliding floor-to-ceiling mirrors.

At breakfast, my favorite was the distinctly halal version of Eggs Benedict, where smoked salmon replaces Canadian bacon on the toasted English muffin. I didn’t have time to check them out, but there’s a swimming pool, exercise facility, and a two-story spa where therapists combine Moroccan rituals with French beauty products.

Sofitel is one of the brands owned by Accor, a French hotelier. The Tour Blanche is lined up on Rue Sidi Belyout adjacent to two more Accor properties featuring lower price points. The next building to the north is the four-star Novotel Casablanca City Center, and just to the north of that is the three-star Ibis Casablanca City Center. This means visitors have a choice in one location not only of several hundred rooms spread across the three Accor-branded properties, but three “levels” of restaurants as well.

One night, for a change of pace from the elegant contemporary French cuisine at the L’Arabesque restaurant in the Tour Blanche, I walked over to the Ibis and dined in their informal Wok & Grill for an inexpensive and speedy meal.

The location for the hotels make it an easy walk to the Old Medina (the part of town antedating the French protectorate), and to the Hassan II mosque (the largest in Morocco) as well to as the current location for Rick’s Café. (Yes, of course an enterprising entrepreneur operates a restaurant and night club in Casablanca based on the movie starring Humphrey Bogart and Ingrid Bergman — but the pictured quote from the film is on a wall in the Sofitel Casablanca Tour Blanche.)

You can check the hotel website for rates and make your reservation. The hotel is also listed on many booking sites such as Travelocity or Hotels.com and others.

(Photos courtesy of Casablanca Tour Blanche and Susan McKee, who was a guest of Sofitel while on assignment for another publication)