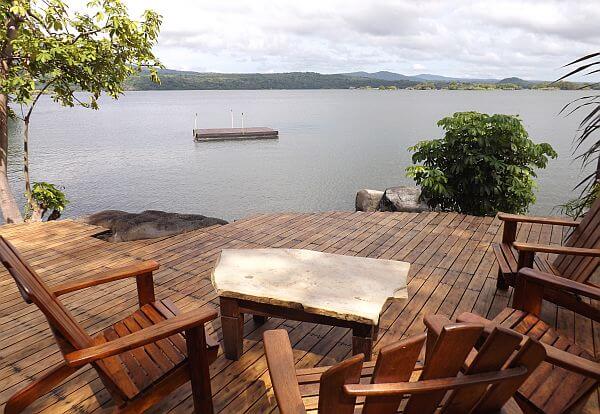 On Jicaro Island Ecolodge near Granada, Nicaragua, it’s easy to get stuck and forget to leave. When I spent some time there recently, two couples had been there for days without managing to make it into the city of Granada, as attractive as it may be. The calm lake, the pool, and the tasty food were holding them in place.

While neighboring Costa Rica has a wealth of green lodging options, there are only a few in less-developed Nicaragua. El Jicaro’s British owner did it right though, building around the island’s boulders instead of moving them and building only with hardwood that was certified as fallen timber, so no living trees were cut. (A practice regretfully made possible by a hurricane that ripped through northern Nicaragua a few years back.)

There is electricity here, Wi-Fi even, but cabins are cooled by lake breezes and the water is heated by the sun. All the soaps and shampoos are biodegradable, in reusable bottles. Where the sustainable attitude shines best though is in the restaurant. All ingredients are sourced from nearby farms, cheeses and sausages are aged by local businesses, and the meat comes from free-range farms. Jams come from a solar-powered processing plant. All the bread is baked in-house, with meals prepared in an open kitchen. This being a country that produces coffee, sugar, chocolate, and rum, they don’t even have to cheat and import when it’s time for dessert. (OK, the wine is from Chile, but still…)

Dishes are inventive and the freshness of the ingredients shines through in everything. Items I tried included guava-glazed ribs with mashed butternut squash and cashews and a heavenly breakfast dish of French Toast with a coconut batter and pineapple syrup, And the one pictured here: beet and ayote salad with grapefruit, basil, and a honey citronette.

I took part in a bartending class and watched a couple go out with a local fisherman to see how they toss their nets, but my only trips off the small island were solo excursions to go kayaking around the many islands in the lake. I spotted a dozen kinds of water birds, some long-legged herons and some tiny birds hopping between lily pads. Orioles screeched overhead and a spider monkey seemed to be tossing fruits into the water from his tree in an attempt to dive-bomb me.

Mostly I took advantage of the peace and quiet, the slowed-down pace, the slow food savored instead of eaten in a rush. After all, doesn’t “sustainability” extend to our bodies, where too much stress and poor nutrition easily takes its toll? If you want to go all the way here, there are morning yoga sessions on a lakeside platform and dedicated massage rooms for working out the kinks.

Rooms here are actually small houses on two levels. All nine of them are the same, with a living room and large bathroom downstairs, the sofa transforming into a pull-out bed if needed. On your balcony you can choose from a table for two or a large hammock strung between two hefty posts. Upstairs, a king bed and desk look out screened windows to water through  the trees, magpie jays or other birds providing the soundtrack. There’s an electronic safe and the casitas can be locked, though I didn’t even discover that until the night before I left and the maid locked me out. (No biggie: nothing is more than a 60-second walk away on this island, including reception.)

Jicaro Island Ec0lodge is part of the Cayuga Sustainable Hospitality Group, which manages a group of green lodges and haciendas in Nicaragua and Costa Rica. See more at their site or at JicaroLodge.com. High season rates are $360 per person all-inclusive, but check for package deals outside of Christmas through March.

You can also book online at Hotels.com.

Review and photos by Tim S. Leffel, who was hosted at Jicaro while doing research for Luxury Latin America – Nicaragua. You can see a full video tour of the lodge and lake by following this link to the associated luxury travel blog.