After a long but beautiful 10-day Eurail trip through Hungary, Austria and Slovakia, I was looking forward to spending my last night in Amsterdam, wandering the canals and NOT sitting on a train.  While normally I prefer to select my own accommodations, the Hotel Ambassade was booked for me and I didn’t have time to research it before my arrival.  To say that I was pleasantly surprised is an under statement. 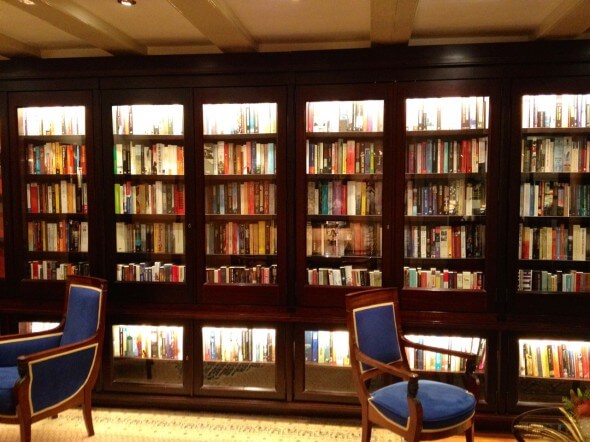 Starting with just one canalside building in 1953, the Hotel Ambassade has grown into a nicely cobbled together charming assortment of  58  rooms, suites, and apartments distributed among 10 buildings. Each room is decorated in period furnishings, blending antiques with modern amenities and extra large bathrooms. My room had a lovely canal view and there are also a few apartments suitable for families. The collection of art in the rooms and halls is envious (more on that in a minute).

Equally as envious is the location of the hotel in heart of the Canal District in a neighborhood called The Nine Streets—De Negen Staatjes. By far one most picturesque shopping areas in the city, Nine Streets is just two minutes form the Royal Palace in the Dam Square and swirl around 17th century canals and are home to galleries, cafes, shops, and restaurants.  But as much as I enjoyed wandering and peeking at the windows of cutting edge fashion boutiques and sipping Amstel at the neighborhood bar, I was most impressed by wandering the halls of the Hotel Ambassade.

The rooms have been recently and elegantly renovated

On the walls of every hall  you will come across both modern and traditional works of art. It could possible be the most impressive private collection I’ve ever seen in a hotel, next to the Le Negresco in Nice, France.  The Hotel Ambassade’s collection focuses on the so-called ‘Cobra Movement’, particularly one of its members, artist Theo Wolvecamp. The collection also contains the works of other prominent Dutch and foreign artists.

The Nine Streets neighborhood is one of             Amsterdam’s prettiest

There are a few little sitting rooms with crystal chandeliers and chintz furniture dotted around the hotel, but I preferred  the not-to-be-missed library, just past the reception desk.  Here you will find a unique collection of roughly 3,000 signed books by authors from around the world who have stayed at the Ambassade Hotel. Perhaps I should send them a copy of mine?  The library is often used for meetings, but when open, it’s a cozy place for an after dinner drink or read of the daily newspaper.

As you probably know, the bicycle is one of the most popular means of transport in Amsterdam (estimated to be about 1 million in the city), and it’s probably the best way to explore. For your convenience, the hotel rents bikes at the reception for €15 a day.

I came for a rest between long journeys, but wish I had stayed longer. Whatever your reason for visiting, the Hotel Ambassade guarantees an experience that exudes all the charm of the city, tucked onto a canal in one Amsterdam’s postcard perfect streets.

Kimberley Lovato is a freelance writer based in San Francisco.

View from my room at Hotel Ambassade

Kimberley Lovato is a freelance writer and author whose work has appeared in Afar, National Geographic Traveler, Executive Travel, Easy Jet Traveller, Delta Sky Magazine and in other print and online media in the U.S. and Europe. Her culinary travel book, Walnut Wine & Truffle Groves, was released in 2010. She is also the author of Michelin's Must Sees guide on Brussels, where she lived for six years.