Things that go bump in the night.

In the Netflix era of The Walking Dead, Zombie TV shows and other apocalyptic horrors streaming around the clock is it any wonder ghoulish sleepovers have gained a new spirited trend with travelers?

For those folks who don’t mind having apparitions of the ghostly kind join them during a hotel stay around New York state this line-up is for you.

Hotel-Scoop.com has scooped up three golden gems that are sure to make you wish you were back home snug as a bug in a rug beneath your familiar sheet covers.

But we dare you to read on – get ready for three of the best haunted hotels you can experience on the Haunted History Trail of New York State. See why USA TODAY ranked these properties in the 10Best contest’s “Best Haunted Hotel” category. 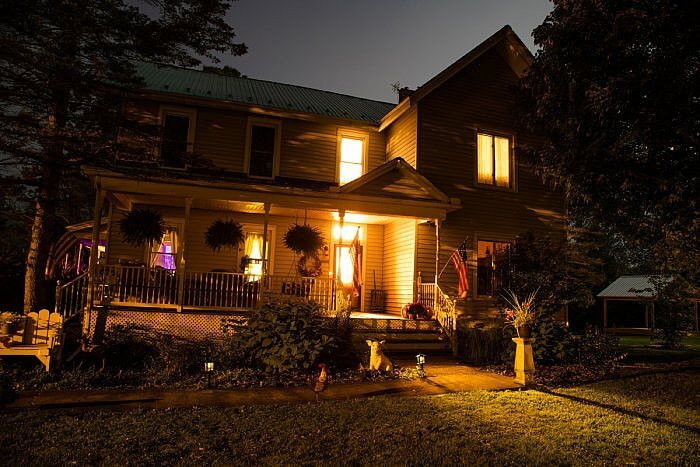 There’s an eerie glow emanating from a clapboard house in a tiny town called Nichols, NY.

The former railroad hotel built in the late 1800s is now home to the Fainting Goat Island Inn. Back in the old days folks used to stay a while on their rail journey traveling the Erie and Lackawanna Railroads.

Some say the guests have never left.

Mysterious inexplicable things are known to have occurred in the quaint 5-room inn. There’s been knives falling from ceilings, slamming doors when the air has been deathly still and quiet. Then there are the other things that could snuff out a flickering candle in a heartbeat.

The décor is distinctive and the themed rooms are filled with period furniture and unique pieces. We like the old timey phonographs in each room. All rooms have a private bathroom, TV, coffee maker, and Wi-Fi. Still who needs to go online when all the action might happen off-line.

Guests staying at this spacious room which boasts the original squeaky hardwood oak floor have been awoken by voices and sights of two chatty tea toddling women. On the upside, there’s a private balcony with gorgeous views of the Susquehanna River.

This room for two is totally furnished from an 1850s stagecoach inn. If you plan to spend the night here prepare for the unexpected and pack your wits with you. There’s been talk of a children’s chair moving beside the bed. As if that wasn’t enough, picture gumballs spilling onto the floor of an empty hall.

The footsteps on an empty staircase when no one is around – the kicker is the staircase no longer exists.

Then there’s a mirror. Thought you were the only one staring at your reflection… maybe not. It’s been reported that a pair of eyes have been known to look back from mirrors.

The busiest ghost, however goes to that of a playful toddler. The spirit of a little boy might keep guests up at night.

The local inn was voted the second best haunted hotel in the country. I dare you to find out yourself.

Nightly room rates are from $90

Why is it one of the places in New York state has been voted most romantic but on the flip side there’s a ghost story attached to it? You can thank a gal named Isabella for that one.

Nestled on the lakefront of Seneca Lake in the heart of the Finger Lakes lies this historic gem. At first glance you’d think titans of industry once walked through the corridors during the Industrial Age.

But as the story goes the biggest most peculiar oddity centers on a belle named Isabella. The drop-dead (we couldn’t resist this pun) gorgeous opera singer is often seen dressed in white prancing around the place. No doubt she is seeking her paramour.

Paranormal experts go even so far as to say you can even see her standing at night in the middle of the front lawn. Inside the three-story mansion stare out the windows but don’t blink. It’s been said that her presence has been felt flying in through the windows.

Isabella and her forbidden lover known as the Spanish Don fled to America and had this immaculate stone mansion custom built in the late 1800s. There are three buildings on the property locals call the “haunted houses.” The lavish house even had a secret tunnel constructed and that’s where the story goes south.

One night the couple tried to escape. The escape plan involved using the underground passage to get to a boat awaiting them. It never happened. The tunnel collapsed on Isabella. She died. To this day folks with the sixth sense swear sightings of Isabella.

Over the years the stone castle has morphed into other uses, one of which, was as a speakeasy. There’s been inexplicable weird happenings too like the sounds of children playing in the rooms or the faint melody of a lullaby sung in the middle of the night. Hear furniture scratching the floorboards on the upper floor in a room that once was a busy place for gamblers spinning the roulette wheel in its speakeasy days.

There’s even been sightings of an old caretaker named Dick O’Brien. Poor old Dick passed away in 1972. It’s been reported that lucky hotel guests have seen him walking upstairs or sitting in his favorite chair.

When it comes to staff vouching for any of the mysterious experiences, yes they have their own personal accounts. Some have reported accounts of showers turning on and off in a guest room to tablecloths tied to chandeliers.

The 47-room hotel has tipped its hat to the original lady of the house by naming the spa in her memory.

The castle has two restaurants, a couple of bars with an attached winery. Visit the tasting room with lake views and see if you could spot the poor damsel standing in the middle of the lawn… You might need a few glasses of their award-winning Belhurst wine or craft beer to help kick start the hair-raising drama.

Room rates are from $99.  You can also check rates and book your stay at Expedia.

Wow, talk about location. The Sagamore has top location status that beats out on its competition. A stunning waterfront property built in the Gilded Age when tycoons wanted to flee the busy streets of New York City or Philadelphia to get a shot of fresh air and leisure, it was here they would venture for R+R.

The exclusive resort in the heart of the Adirondacks with luxurious Lake George views would make anyone extend their stay.

And they do… to this day.

Located in Bolton Landing, New York the historic property is revered for its amenities and experiences. For the paranormal crowd, you will not be disappointed.

There’s talk of at least 8 ghost stories. For starters, you might spot a young lady named Lillian off the main hotel lobby. Lillian, it’s been verified, used to stay at the upscale resort in the early days. Her favorite place is to stand on the porch gazing at the lake. Her favorite attire is a fashionable pinkish brown gown fringed with lace at the waist. She’s all dressed up to go off boating for the afternoon.

If you see a dapper dressed guy wearing a three piece brown suit that would be Walter. He’s usually by the elevator nearest the Concierge. This poor chap is either on his way or leaving the card room. Today, the first floor rooms are situated by the former card room. The card room used to be the hub and spoke, the lively part of the resort where guests gathered after a meal to smoke and drink liquor.

We won’t elaborate on the other ghostly guests, you’ll have to explore these other regulars yourself.

Visitors can meet these and the other spirits when they stay the night at the haunted resort or experience ghostly dining at the hotel restaurants. Ghost tours are offered throughout the year.

Average nightly room rates are from $239.

You can book these hotels and others in the region at Expedia, Travelocity or other hotel booking sites.

Award-winning travel journalist Ilona Kauremszky seeks out adventure. She’s taken an Indianapolis 500 joyride with race car sensation Sarah Fisher, flown over Kenya’s magical Masai Mara in a hot air balloon and peered into secret tombs in the Valley of the Kings in Egypt. Ilona is the founding president of the Travel Media Association of Canada’s Ontario Chapter, and was a syndicated weekly travel columnist for Canada’s largest newspaper publisher. She has worked with legacy newspaper publishers and guidebook companies across the United States. Companies like Forbes, AFAR Magazine, USA Today, Boston Herald and Michelin Green Guides to name but a few. Ilona is the Editor of DreamScapes Magazine as well as a reporter/producer with mycompasstv. You also can find her columns in trade and luxury travel publications. Follow her travel pursuits on Twitter/YouTube @mycompasstv