Set in a 1916 building that was the former home of one of Stockholm’s largest department stores (and where Greta Garbo once worked as a shopgirl) the newly opened Haymarket by Scandic is a modern hotel with nostalgic appeal. Rooms are designed to evoke the 1920s, with marble countertops, velvet couches, and gold faucets, but amenities like free wifi keep it firmly planted in the modern age.

The Haymarket, part of the Scandic hotel group, opened in May of 2016. Though it’s brand new, the hotel seems to have already ironed out every aspect of service. From the moment I walked in until the moment I left, staff members were incredibly helpful and pleasant–even going to so far as to let me order a late-night snack in the restaurant five minutes after it had officially closed.

There are 405 rooms and suites in the Haymarket and they come in a variety of sizes, but each is decked out in art-deco style with black-and-white bedding, custom wallpaper, blond wood floors, rose gold accents, and soft blush and rich teal tones. Black and white photographs of the former department store’s most famous shopgirl adorn the walls.

“Sleep” rooms have no windows–helpful for avoiding the bright nights of a Swedish summer. My room had two large windows that opened on to the Haymarket square; thankfully the blackout shades did their job as the sunlight attempted to peek into the room well past 10pm and as early as 4am during my mid-July visit. My room was quite spacious, with a queen bed with a trunk at its foot, a desk and chair, and a roomy armoire for storage. 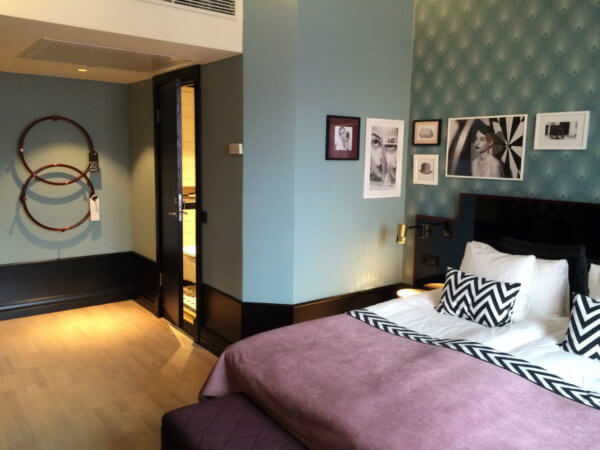 My bathroom wasn’t quite as roomy, though it was plenty big for one person, with a tiled shower, illuminated mirror, and small counter space adjacent to the sink.

The standard hairdryer, robe and slippers were provided, and there was a small safe in the armoire. As for tech, there was a wall-mounted flat-screen TV, free wifi, and plenty of outlets scattered around the room.

Outside of the rooms, the hotel exudes the same vintage charm, with accents perfectly recreated to mirror those found in the building in the 1920s, such as the illuminated columns and art-deco style railings found in the lobby. To really bring home the hotel’s connection to the golden age of cinema, scenes from a black-and-white movie (specially created for the hotel) play on dozens of screens in the grand entrance foyer.

Also in the first-floor lobby are Greta’s, an airy, casual, counter-service cafe serving breakfast and light lunch, and Americain, a swanky brass-accented bar with plush seating and adjacent outdoor space. The latter serves beer, wine, and creative craft cocktails until the wee hours and attracts both hotel guests and sophisticated locals.

One floor up, Paul’s bistro is the site of the hotel’s included breakfast (a hearty spread of scrambled and soft-boiled eggs, Swedish pancakes, sausages, bacon, granola, bread, and pastries) as well as weekend lunch and nightly dinner. On the last night of my stay, I sat down for a decadent dinner of foie gras torchon and a dish of faro, poached egg, and grilled broccoli with a heavenly stilton cream.

Throughout my stay, I was impressed with the hotel’s style and with its service. From the front desk to the bar, every staff member I encountered was helpful and accommodating. The hotel’s location is also ideal; it’s just a short stroll to the Gamla Stan neighborhood and five minutes on foot from the train station. With a retro-glam style with a modern twist–“Garbo meets Gaga”, as the hotel puts it–and superb service and amenities, the Haymarket by Scandic is an inviting and sophisticated place to stay in Stockholm.

If you go: Room rates start at around $185 per night in off season. Rooms overlooking the square can be a bit noisier, so if you’re a light sleeper request a “sleep” room or one away from the front of the hotel. Make your reservations online at the hotel website or through Travlocity.

I was a guest of the Haymarket, but all opinions are my own.